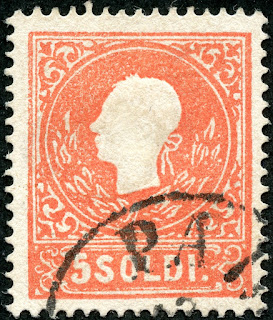 1858-62 5 soldi red "Emperor Franz Josef"
For Lombardy-Venetia, 100 Soldi =1 Florin
Type II: "Loops complete. Wreath projects further at top of head"
Quick History
The Kingdom of Lombardy-Venetia was established after the defeat of Napoleon in 1815, and lasted until 1866. The Kingdom is located in (presently) north Italy with Milan (Lombardy) and Venice (Venetia) the most prominent cities. Lombardy-Venetia were part of the Austrian Monarchy ruled by the Habsburgs, along with Austria and Hungary. Lombardy-Venetia stamps were issued from 1850-1865. The stamps were similar in design, except for denomination, to early Austrian stamps.
Lombardy was annexed to Sardinia in 1859, and Venetia became part of the Kingdom of Italy in 1866.

Trivia: Maximillian, younger brother of Emperor Franz Josef, served as viceroy in Milan between 1857-59. He later became Emperor of Mexico.

Nice classic coverage by Big Blue. These stamps are popular among stamp collectors in Milan and northern Italy, so no true bargains. 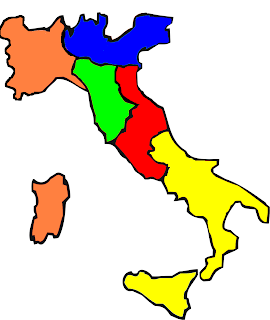 1859: The Kingdom of Lombardy-Venetia is in blue
Others: Sardinia-orange; Papal States-red; Two Sicilies-yellow;
Duchy of Tuscany, Parma and Piacenza, Modena and Reggio-green
Kinds of Blue
The 1997 edition and the 1969 edition are identical.
Compared to the 1969 edition, the 1947 and 1941 editions are the same.

Evaluating a nice short sweet classic group is welcome after 21 pages of Austria. :-)

I would like to discuss a little bit more my philosophy of including (or not including) subsequent issues as "choices" for Big Blue's stamp spaces. Here for Lombardy-Venetia is an easy decision of including Scott 21 and 22 ( The 1864-65 issues) as a choice versus the Scott 16 and 17 ( 1863 issues).

This is what Big Blue gives us for a clue:

One could argue that the 1863 issue has first rights. It probably does if everything-especially cost-was equal.

But there is a 1864-65 issue that has the same denominations, same design, and same color. The issue only differs significantly, besides year of issue, in that it has a watermark-"Briefmarken" in double-lined capitals across the middle of the sheet. And most importantly, these stamps are much less expensive ( $52<$125, $9< $37+). The only counter argument one could make is, if Big Blue wanted us to consider the later issues, why didn't it not label the years 1863-65? I agree that sometimes that argument is persuasive.

But not in this case.
1)Year of subsequent issue close to year of original issue...CHECK
2)No obvious differences without using a watermark tray or measuring  perfs....CHECK
3)No "clues", especially color description clues in Big Blue, that would give the first issue "prime" rights..CHECK
4) Big Blue does not offer another space for the subsequent issue...CHECK.
5) The subsequent issue does not necessarily have to offer cheaper costs; but if it does, clearly an incentive to offer it as a choice...EMPHATIC CHECK

Finally, one has to use a measure of "common sense" of what feels right in these judgement calls that Big Blue forces us not uncommonly to make. So the 1864-65 issue "passes" all the evaluation criteria, as well as the common sense judgement. In it goes.

On the other hand, I came to a different conclusion with the Australia postage dues issue.

This is what Big Blue gave us:

Remember, Big Blue provides no other postage due space for these issues, so one has to choose.

The 1931-36 issues are ruled out right away because of the stated color preference in Big Blue.

So one could argue again that the 1909-23 issue has first rights, because of the "1909" date listed.
Further, the issue was used for 15 years, a very long time. And if Big Blue truly wanted us to consider the very much later issued 1922-30 stamps, why wasn't it listed thus?

I find the argument fairly persuasive. And I listed the 1909-23 issue as the one marked (intended) for the spaces.

But perhaps Big Blue merely wanted us to consider postage dues of the "1909 type", rather than the 1909-23 issues exclusively? Or more likely, this was just a lazy and unclear presentation on Big Blue's part, and we ourselves should "understand" that the 1922-30 year stamps are O.K. for the spaces?

Did I mention the 1922-30 year postage dues are significantly less expensive ($25+ rather than $58)?  :-) Well I didn't until now, because in my view, the "right" issues should go in the space. Yes, cost is definitely a consideration, but not the only one. ( I did suggest in this case if one wants to put in the cheaper issues and have a clear conscience , just write in "1909-1930".)

So, to sum up: two judgement calls  regarding including a subsequent issue as a choice for spaces in Big Blue,.... and two opposite conclusions!