Big Blue Checklist-How to Use 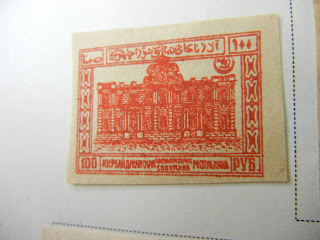 
Bob Skinner of 'Filling Spaces" blog http://globalstamps.blogspot.com/, had a great analysis recently of the various ways a checklist for Blue could be setup.

I would like to add to the conversation by showing what  I "fell into" when I started the checklist-perhaps some good, and some bad.

Until I receive the 1997 edition now on order, I label based on how Big Blue (1969) breaks down the years and issues. If the Big Blue's year label says 1922-26; that is how I also label the checklist, and the stamps or stamp issues that are illustrated/described are listed until the next year label in Big Blue 1969. Works quite well if you are following with the same edition.

But the 1947 edition might parse the larger issue down to say 1922, 1923-26, with the stamps now in those tighter categories. In contrast, Big  Blue (1969) has lumped them, and will intermix the "tighter" presentation from Big Blue (1947). So although all of the stamp spaces will be there, ( unless there is an exception noted in my "Kinds of Blue" subsection), the  Big  Blue (1947) collector will have to find the stamp spot on the page, and not go easily from space to space from the 1969 based checklist. Of course most of the time the albums are identical in presentation of the years or issues.  But there are  differences at times, especially in the earlier issues.

But the other advantage with following Blue 1969's year labels ( or other edition years really), is that this  gives a huge clue to which stamp(s) Blue was intending to go in the spaces. As we well know, Blue often times is pretty opaque about its' intentions, so any little clue helps! :-)

I looked  briefly at labeling years or issues based on Scott Specialized Catalogue 1840-1940, which is of course the "official" breakdown.  But really it is too much work- it parses too finely, for the usually broader catagories that Blue represents on its pages.

Here is how Aden's " ship depicted" stamps of 1937 in a series would look like.

That of course means Scott numbered stamps 1,2,3,4,5. They are all in a series, and all with spaces in Big Blue. Horizontal format to save space, and generally no descriptive labels, as the Scott number should be enough to identify.  The reality is to interpret the checklist in more detail, you will need your Scott catalogue handy. :-)  Labeling each stamp descriptively -example- Scott 1  1/2a green - is a LOT of work, and I would like to eventually finish this project in this century. :-)  Each Scott number is listed set off by a comma, so you can circle the entry for inventory purposes, or for want list purposes. That is why this format was not used:

What about if the stamps are listed like this?

That means you and I will have a choice of stamp to fill the space-either Scott 2 or Scott 2A. Same with Scott 11 or Scott 4, you can choose; but notice Scott 11 is listed before Scott 4? I try to put the less expensive stamp first.

I sometimes use an alternative listing for multiple choices for a stamp space - see example below.
1937
Scott 2 ( or 2a,2c,2d)

That means Scott 6 or 9  might be good less expensive choices. I always try to suggest a stamp that would fit logically in the space for that year or series. I also take into consideration, in some cases, if a stamp choice will fit if the space is horizontal (long) or vertical (tall) .

Scott prices for the stamp or stamp series are given in rough  'ball park" figures. I bin the prices as such:

If you want the exact price, consult your Scott catalogue. The prices will go out of date anyway after a few years.

Note: remember these are "retail" prices for very fine copies. Often, real world prices will less than that - a  "% of Scott".