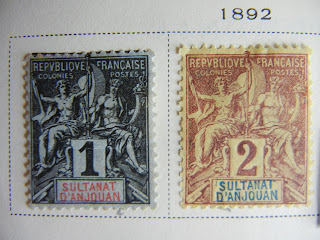 Of those, 16 are CV $1+ -$6+, or 53%. Anjouan is a bit expensive (Classic French Colony), but a representative collection should be available. 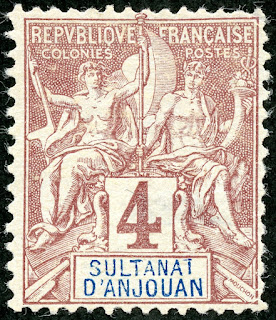 The 1892-1907 issue had 19 stamps, and has the familiar "Navigation and Commerce" motif of many French colonies.

The name of the colony is either in blue or carmine ink. 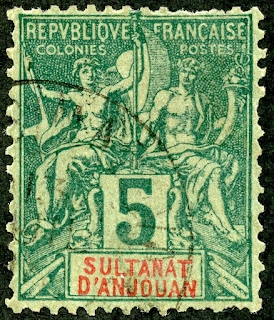 1892-1907 Issue in Deep Blue
Deep Blue (Steiner) has one page for the stamps of Anjouan. All of the Scott major numbers have a space. For the surcharged issue of 1912, the minor number stamps (11) that have the alternate spacing between the surcharge figures do not have spaces. One may need a separate quadrilled page for those.

Big Blue Picture
On two lines of one page ( located just before Ascension in my 1969 edition) are seven stamp spaces.
In the 2011 Scott Specialized 1840-1940, there are 30 major varieties listed.
Big Blue has 23% coverage. 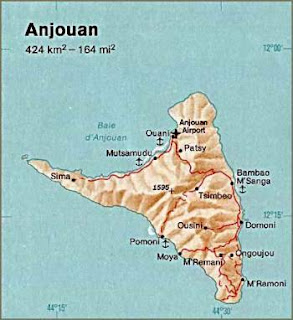 Big Blue Bottom Line
The country is not in the 1997 edition.  That is a shame as the stamps are fairly inexpensive.

Note: Anjouan is back in the '97 edition, and with increased coverage! -See Al Layton's comment.