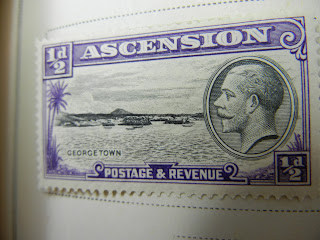 1934 Scott 23 1/2d violet & black "View of Georgetown"
Quick History
Ascension Island is a quite isolated volcanic island of lava flows and cinder cones in the South Atlantic Ocean. Lying approximately midway between South America and Africa, it is currently part of the British Overseas Territory of Saint Helena, Ascension and Tristan da Cunha. It is governed from the Capital Saint Helena, which is 800 miles to the south-east. The main economy revolves around the military bases at Wideawake Airfield, and a BBC relay station. Today's population is 900 people.

The Island was so named when in 1503 the Portuguese sighted the island on Ascension Day.
The stamps of Great Britain were used in Ascension from 1855 through 1922. The Island was then administered by the Colonial Office and annexed to the British Crown Colony of St. Helena. The stamps of St. Helena were overprinted "Ascension" in 1922, and then their own issues began in 1924. The main settlement is Georgetown, site of the only Post office. The population was listed as 188 in 1931. 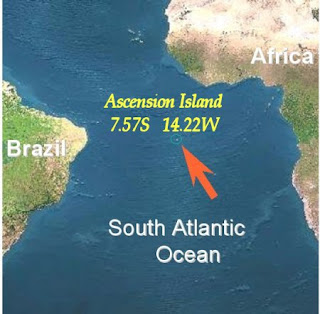 Yes, Ascension Island is not close to anywhere
Big Blue Picture
On two pages, beginning in 1922, Big Blue (1969) has 30 illustrated/descriptive stamp spaces and one blank space for a total of 31 stamp spaces.
The 2011 Scott Classic Specialized catalogue has 41 major varieties listed up to 1940.
Big Blue provides 76% coverage.

Looking for possible additional stamps to collect with a $4 catalogue limit yields basically...none!
No bargains here, nothing to see, please move along. :-(

But I would like to discuss in more detail  the 1938-53 pictorial issue which demonstrates the "sudoku" decision tree that one is required to do by Big Blue. To refresh one's memory, look under Antigua where is discussed the various shades of the series, the year(s) when the stamp(s) first appeared, and the lack of 1:1 correspondence with the shades as they are listed now compared with how the shades were listed by Big Blue and the earlier catalogues.

1) Many of the issue years are much later than 1940. We decided this really is not a problem, so no more worries there.

2) The color description continues to be a mite confusing: Big Blue says" orange and black" for instance, when now the stamp is described as "orange" Well that is easy- The modern catalogue appears to no longer mention the gray-black shades of the pictorials inside the main surrounding ( orange) color.

3) If the stamp has a illustration in Big Blue, it can provide more choices for the space than if there is a description-which always includes color- for the space. For instance, Both the 1 1/2 p red('44) and the 1 1/2p lilac rose('53) are eligible for the illustrated space. In contrast, the space for the 2p is "descriptive", and asks for the "orange" stamp. So the 2p orange('44) goes there. Therefore the 2p red('49) is" r/o"-ruled out.

a) Since the orange yellow 1p is already called for by the description under "1940", clearly one of the  green 1p's should go in the illustrated space under "1938"

c) But which one is the most likely one that Big Blue intended? I would argue it is the 1938 expensive 1p green.  It is after all listed under the "1938" series. And there is another "1940" series further down the page where the orange yellow 1p ('42) is put.  So, logically, it appears Big Blue does not actually have an intended space for the '49 cheap 1p green.

5) And I've found that Big Blue tends to favor the early- and often more expensive- types in a series because the "color descriptions" are cast in stone when the page is set up for printing. Later - and often cheaper- colors for a denomination are subsequently frozen out. I believe Big Blue rarely changes a "color description" in a  series once it has been set up for printing. 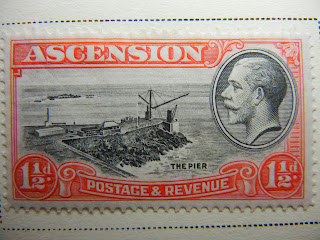 Ascension Island
Kinds of Blue
The 1997 edition and the 1969 edition are identical.
Compared to the 1969 edition, both the 1947 and 1941 editions have no significant differences.
A trivial difference is, for the '47 and '41 editions, the 1937 Coronation Issue Scott 37 1p deep green is described rather than illustrated. 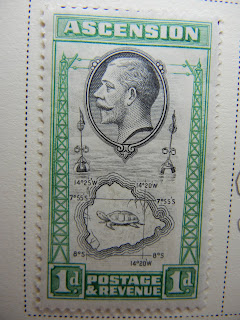 1934 Scott 1p light green & black "Map of Ascension"
Big Blue Bottom Line
Highly popular. We all dream about living on a tropical island. Only 900 lucky souls actually live there. But we can have a little piece of paradise by buying their stamps.