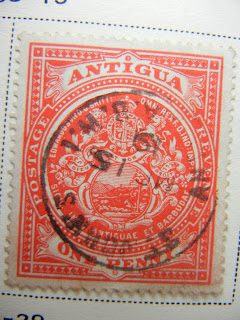 1908 Scott 32 1p carmine "Seal of the Colony"
Quick History
Antigua, now part of the country of Antigua and Barbuda , is the largest island of the Leeward Islands in the West Indies in the Caribbean. Antigua is quite prosperous today because of tourism, two medical schools, and off shore banking. In 1967, it became an associated State of the Commonwealth, but disassociated itself from Britain in 1971. Earlier, it was one of the five Presidencies of the (British) Leeward Islands Colony. The other Presidencies were St Christopher, Montserrat, Dominica (until 1940), and the British Virgin Islands. The Capital is St John's and the population in the 1930s was about 34,000. Postal markings began in 1850, with the first stamp issue in 1882. Antigua stamps were discontinued from 1890-1903, when the stamps of the Leeward Islands were used. After 1903 until 1956,, both Leeward Islands and Antigua stamps were valid.

Antigua and the Leeward Islands
Big Blue Picture
On two pages, Big Blue (1969) has, beginning with the 1873 issue, 39 stamp spaces.

The 2011 Scott Specialized 1840-1940 Catalogue has 89 major stamp descriptions beginning with the 1873 issue. Note:Stamp issues do begin with 1862, but the stamps are fairly expensive, so I am ignoring the coverage from 1862-1873 for counting purposes. Note: The specialized catalog does go up to 1952 for the British Commonwealth countries, so I eliminated post 1940 issues.

Coverage in Big Blue is 44% 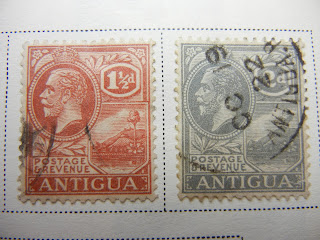 1938-51
84,85,86,87,88,89,90,91 (<$1-$2+)  Note: shades are recognized by Scott on almost all stamps. Some major Scott numbers have shades that were issued after 1940, while the pre-1940 shade  is now catalogued with a minor number. In other cases, it is difficult/impossible to determine which shade Big Blue is listing. I am ignoring shades for the purpose of the checklist, so there could be Scott numbers listed here with color varieties issued after 1940. For the full discussion, see Big Blue Bottom Line-Antigua.

1947 Scott Standard Catalogue has the same, but simplified numbers: no shades, minor varieties etc. Of course, it does not cover series stamps (1938-51) that were issued after 1947. 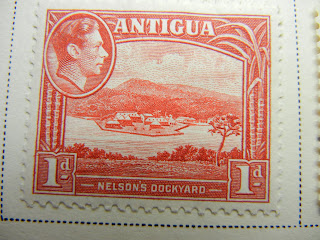 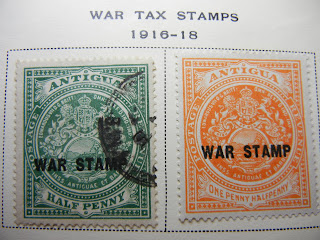 1916-18 War Tax MR1 1/2p green & MR3 1 1/2p orange
Big Blue Bottom Line
Antigua has attractive British colonial stamps; no wonder the area is popular. Of course there are no bargains to be had by the worldwide collector.

The 1908-12 Seal of the Colony issue is particularly attractive; Too bad it was dropped in the 1969 edition.

I would now like to discuss a bit of a dilemma that the British issues pose;especially those that start in the 1930s and continue even into the early 1950s,  The Antigua issue of 1938-51 is a good example. The problem is there are (often) several shades for each stamp depending on what year of issue.

Here are the descriptive colors listed for the issue in Big Blue-both 1969 and "Junior" 1941 ( The four other varieties  have pictures in Big Blue, and hence no color clues)

What can we conclude?
1) The color clues follow the 1947 Scott standard catalog version

3) Some colors described in Big Blue, and also described in the 1947 Standard catalog no longer "exist"- or the color descriptive name was changed. -Specifically 1 1/2p "brown violet" from Big Blue and the 1947 catalog. The colors are now "red brown" (43), "chocolate brown", or" lake brown" (49). Since this color -"brown violet"was already described in the 1941 "Junior" edition I have (as well as the 1969 version too), the color "red brown"(43) and "lake brown"(49) cannot be the same, as they obviously were issued in later years. But is "chocolate brown" -Scott 86a, the only color remaining- the same as "brown violet" as described in Big Blue? My first reaction is "No". But perhaps somebody with more knowledge of shades in this issue could help out?

Finally, the 2p "dark gray" found in Big blue and the 1947 catalog apparently no longer exists- at least as a description. In 2011 Scott Specialized we have Scott 87 "gray", and Scott 87a "slate" (51) I do suspect in this case that "dark gray" has morphed into "gray", but this is only a guess.

So what is a "generalist" to do? This is what I am going to do: I'm not going to worry about it. :-) If there is a space for a 1938-51 stamp from a commonwealth country, I will put it in. I'm O.K. with post 1940 "color" shades in Big Blue. If I get another color shade, I might add it on a supplementary page, and even try to determine its catalogue number. The checklist for the country will just have the major Scott number. I might mention there are shades available, and some were issued between 1940-1952, but I'm not going to ban them from Big Blue.

Note: Map, and 1933 Map image (below) appears to be in the public domain. The original for sale at pennymead.com 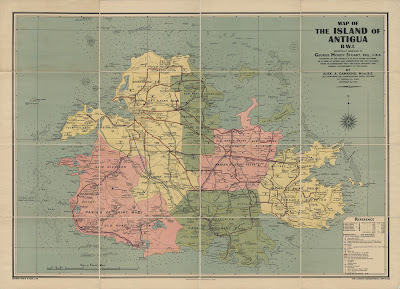