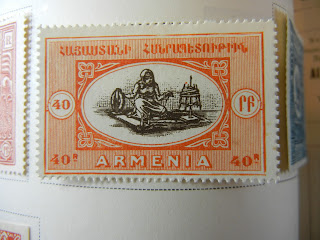 1920 "old" Scott 274 40r red brown & orange
Prepared, but not issued as the National Republic collapsed
Quick History
Armenia is bordered by Georgia, Azerbaijan, Iran and Turkey. Armenia was a National Republic in 1919-20, when the 1902-19 Russian stamps were handstamped with the Armenian letter "H" for Hayasdan (Armenia).
The Soviet Eleventh Army invaded in 1920, and the National Republic collapsed. The Armenian Soviet Socialist Republic issued stamps until 1923. These stamp issues where then replaced by those of the Transcaucasian Federation of Soviet Republics, consisting of Armenia, Azerbajian, and Georgia. Population of Armenia was about 1 million in the 1930s.

In 1991, the Soviet Union was breaking apart, and Armenia became the first non-Baltic republic to establish its independence.

Interesting Fact: Armenia has not only its own language, but its own alphabet. 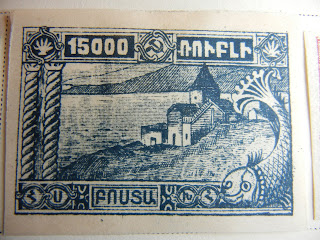 Actually the coverage appears better, because 265 varieties are during the Russian stamp "handstamp" era.

For me, the most interesting issue is the 1920 set of 10 stamps that were never used because they were overtaken by history. Let me explain. In 1920, the National Republic prepared a 10 stamp design. The printing was done in Paris, but a large quantity was lost on their way to Armenia. Before they could be used, the National Republic collapsed as the Soviet Eleventh Army entered Yerevan. The use of these stamps was prohibited, and the stamp issues of the new Soviet Republic were used.

Big Blue has illustrations for five of these stamps, but they no longer have active Scott numbers. The set was  used fiscally, but not for postage.  For myself, I'm going to be happy to fill the spaces with this issue. Stamp collecting really is more than stamp collecting; and here it gives us a  little tangible piece of significant history.

Additional stamps of the 1919-20 Russian stamp "Handstamp" Era
There are lots of additions possible, but if one would like to collect other denominations than those represented in Big Blue, here are some choices:


Big Blue Bottom Line
Really I find Armenia's stamps fascinating; perhaps because of its unique alphabet. The history as reflected in Armenia's stamps (until they were absorbed into the larger Soviet sphere) during  1919-1920 is likewise fascinating.