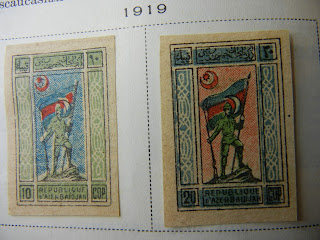 National Republic 1919 Scott 1 10k & Scott 2 20k "Standard Bearer"
The thick grayish paper is a Soviet re-issue
Quick History
Located close to the very southern part of Russia in Eastern Europe, Azerbaijan was surrounded by Georgia, Dagestan, Persia, and  Armenia, with the Caspian Sea on the eastern border.The capital is Baku, and the population was 2 million in 1923.

After the collapse of the Russian Empire during WW1, Azerbaijan declared Independence in May, 1918, as the Democratic (National) Republic. But Lenin needed Baku's oil fields, and the Bolshevik 11th Red Army put an end to Azerbaijan's short independence.  The Azerbaijan Soviet Socialist Republic was formed in 1922, lasting  through 1924, when Azerbaijan, Armenia and Georgia combined forming the Transcaucasian SSR. The National Republic issued stamps in 1919; then the Azerbaijan SSR issued stamps from 1922-1924.
Independence from the Soviet Union was declared in 1991.

Trivia: Nine out of the eleven Climate Zones exit in Azerbaijan. 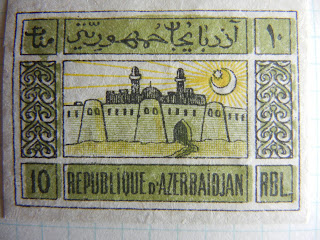 Big Blue Checklist
1919
1,2,3,4,5,6,7,8,(<$1)
9,10 ($1+)
Note: Two issues; the National Republic issue is on thin white paper, while the Soviet re-printing is on thick grayish paper. In my experience, the thick grayish Soviet re-issue is far more common in collections.There was also a design change on the 5r & 10r stamps for the Soviet issue. Illustrated above.
The early white issues are valued by Scott @ 5X usual catalogue. 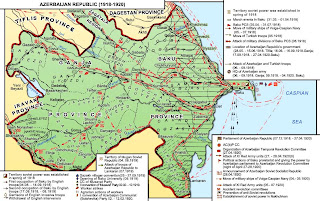 Big Blue Bottom Line
The history is what is really fascinating.
One might want to add a supplemental page for the Soviet era issues.

Note: Thanks to Keijo and his wonderful blog http://www.stampcollectingblog.com for bringing to my attention the difference in paper and design types for the 1919 National Republic issue.