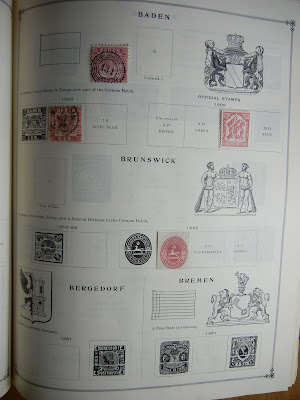 If the page area reflected cost, Bremen would occupy 80%.
Quick History
The Free City of Bremen and the associated port of Bremerhaven, both on the Weser river in northwestern Germany, had a population of 110,000 in 1880. Bremen joined the Confederation in 1868 and the German Empire in 1870. Stamps were issued from 1855 to 1868. More importantly, Beck's Beer has been issuing forth since 1837. :-) 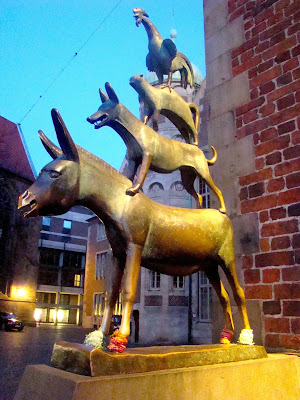 The Musicians of Bremen
Bremen town...why did it seem so familiar?...oh yes, the childhood fairy tale I read so many times...
The Brothers Grimm: "A certain man had an ass which for many years carried sacks to the mill without tiring. At last, however, its strength was worn out and it was no longer of any use for work. Accordingly, its master began to ponder as to how best to cut down its keep.  But the ass, seeing mischief in the air, ran away and started on the road to Bremen. There he thought he could become a town musician..." 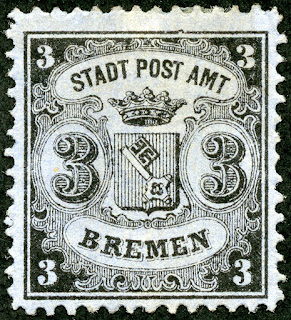 1866 Scott 10 3gr black/blue
"Coat of Arms"; A1 design
Big Blue Picture
The Free City of Bremen, like the other German States on the page, was cut out of Big Blue in 1969. Bremen MAY have been the chief reason, because if expensive stamps could be pruned, Bremen had them in spades.
The '47 and '41 Big Blue had three stamp spaces for Bremen. The 2011 Scott Classic Specialized catalogue has 15 major stamp varieties. Coverage was 20%.

Note: After the Bremen section, one will find a short discussion of other "B" countries that are not, and never have been in Big Blue. 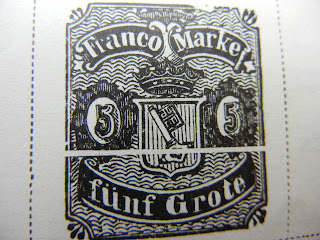 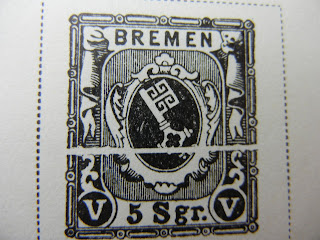 
The "B" countries that have NEVER been in Big Blue
Note: See the  Filling Spaces Blog, to get Bob Skinner's take on these countries: I think we agree. :-) 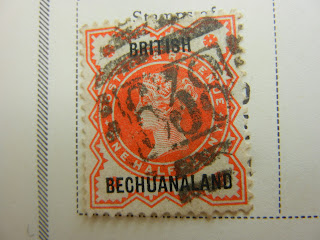 
British Bechuanaland, a Crown Colony, was located south of the Molopo River (The Protectorate was north of the River), with its Capital Vryburg and a population of about 70,000 in 1891. Becchuanaland was annexed to the Cape of Good Hope colony in 1895, and eventually became part of the Republic of South Africa.


So what's a Big Blue collector to do? Collect the Colony by all means! I have a quadrilled page adjacent to the Bechuanaland Protectorate where I can put these nice stamps.


Colonies of British Colombia & Vancouver Island
Vancouver Island, of the west coast of Canada, became a Crown Colony in 1849, and united with British Colombia (a colony since 1858), in 1866. Eighteen stamps were issued between the two from 1860-1869. In 1871 the Colony joined the Canadian Confederation.
A British Columbian 1865 Scott 7 3p blue can be picked up for $90+; the cheapest of the issues. Hardly Big Blue territory. But when one sees how much the outlay is for some of the Canadian stamps that ARE in Big Blue, the price doesn't quite seem so high. :-)


Bangkok
The Capital city of Siam ( now Thailand), stamps were issued in 1877 for use at the British post office in the city. They consisted of Straits Settlement stamps overprinted with a "B". This continued until 1885, when the stamps of Siam were the only permitted stamps allowed to be used in the country. Of the 22 stamps issued, the cheapest is the 1882-83 Scott 12 2c rose for $50+. The 1882 Scott 30c claret is $38,000+. Not going to happen.


Bushire
A port city (population ~15,000 1900) on Persia's (now Iran) Gulf coast, Bushire was under British occupation for two months in 1915. Persian stamps were overprinted BUSHIRE/ under British/ Occupation. Of the 29 occupation stamps issued, the least expensive is a 1915 Scott N5 6c green& red brown for $40+. Unless one is particularly interested in the philatelic history of the area, probably too rich for most Big Blue collectors.

Note: "Musicians of Bremen" pic appears to be in the public domain.