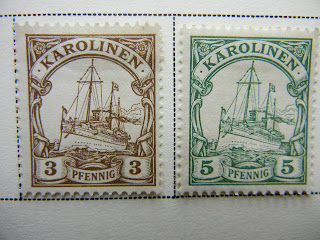 1901 3pf brown and 5pf green
Quick History
The Caroline Islands ("Karolinen" in German), is an  archipelago of over 500 small islands 1200 miles apart in the west Pacific Ocean north of New Guinea.  In 1899, Spain sold the Islands to Germany, which administered them as a German Colony along with German New Guinea. Stamps were produced for "Karolinen" from 1900-1919. The population was reported to be 40,000 in 1915.  Japan occupied the Islands in 1914, and after WWI, received a Mandate in 1920 from the League of Nations. After WWII, the Islands became Trust Territories of the United States. Finally. the Islands gained their independence. The eastern portion became part of the Federated States of Micronesia (1986), and the western portion became part of Palau (1994). 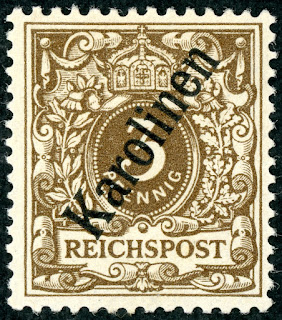 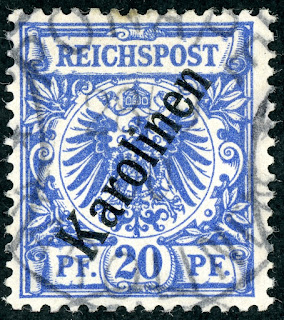 The 1900 six stamp issue (major numbers) were overprinted at a 56 degree angle. They are the more common variety, and the CV ranges from $10+ to $50+. "Used" is valued at a slightly higher CV than "unused". 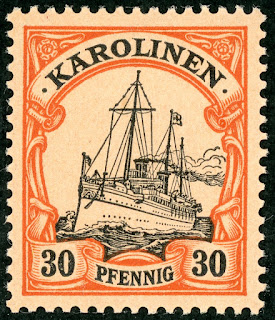 1901 Scott 12 30pf orange & black
Kaiser Yacht "Hohenzollern"
The 1901 issue consisted of thirteen stamps, and has the familiar "Kaiser Yacht" design seen with German colonies of the time. This issue is unwatermarked.   CV is relatively modest for unused, with a CV of $1+ to $10 for twelve stamps. Only the 5m denomination stamp lies outside with a CV of $160. 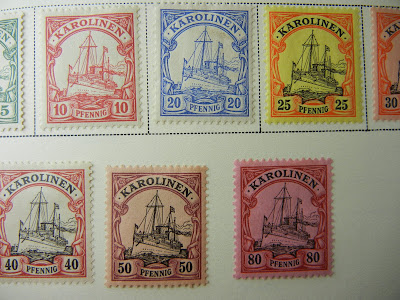 The one illustrated stamp space for the "1889" issue presents two problems.

First, the illustration cut is unclear to me if it represents the Scott 1 3pf ($10+) or Scott 2 5pf ($10+). Generally, the '97 edition stamp cut illustrations are often over-dark, so I am in the habit of checking the other editions. But that didn't help here. I chose the 3pf.


If one is interested in  Additionals....
The 1899 issue with the 48 degree angle overprint issue is expensive: $60+ at least, so not a good candidate for BB.

Big Blue Bottom Line
An interesting history/geography lesson, and a refreshing change from the British/French/Portuguese/Spanish colonies. Four additional stamps in the "Hohenzollern" series can be picked up for $1+-$2+.