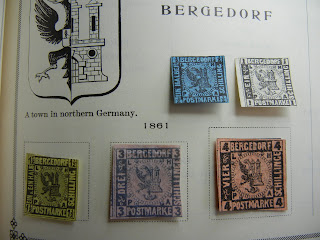 A bonanza?
Quick History
Bergedorf, a town of 3,000 in 1860, was located in north Germany. Bergedorf was owned jointly by the Free Cities of Hamburg and Lubeck until 1867, when it was bought by Hamburg. Five different denomination - and different size- stamps were issued from 1861-67. 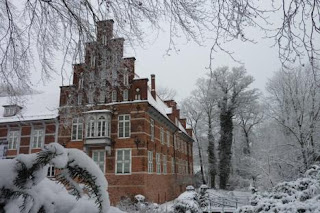 Bergedorfer Castle
Big Blue Picture
As noted, Bergedorf was one of the German entities removed from Big Blue in 1969. The '47 and '41 editions had one illustrative space for the 4 schilling denomination, and two blank spaces. The 2011 Scott Classic Specialized catalogue lists 5 denominations for 1861-67; Bergedorf's only issue. Coverage is 60%.

Now for the bad news- or good news if you just want to fill the spaces. :-)
There are plentiful reprints of all the denominations, and they are valued @ $1 each.
Scott lists the differences between the genuine article and the reprints. I happily noticed that one of my Big Blue's had all five denominations mounted in the Bergedorf section. Suffice to say that a quick examination revealed that at least 4 out of 5 were reprints. Oh well.

2018 Update on Genuines/Reprints/Forgeries
There are some good resources available now on the internet about genuine/reprints/forgeries for Bergedorf. I was planning to do an update for Bergedorf to illustrate the differences, but why should I reinvent the wheel? ;-) The Internet resources are far better then what I can do, as a general WW collector.

First great Resource:
Go to http://stampworld.ca/Website/, which is developed and maintained by "Falschung" from Canada. Find the index for "German States" and steer your way to "Bergedorf". Incredible and specific detail about the characteristics of Genuines. (Note: "Falschung" does not want direct linkages to his information, other than to his overarching website (Home page), and therefore I am respecting his wishes.)

Second great Resource:
Go to http://stampforgeries.com/forged-stamps-of-bergedorf/, which is developed and maintained by Morten Munck of Denmark.

Kinds of Blue
As noted, Bergedorf is only found in my '47 and '41 editions. 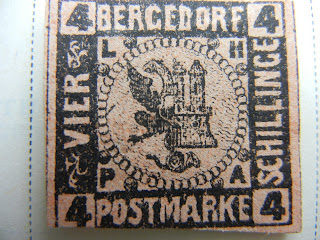 The line at the 9 o'clock position just to the inside of the "necklace" marks this 4 shilling as a reprint.
Big Blue Bottom Line
I wouldn't mind some genuine ones.  ;-)

Note: photo appears to be in the public domain.
Posted by Jim at 3:21 PM