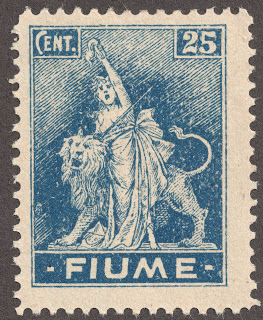 1919 Scott 33 25c dark blue "Revolution"
Fiume's first non overprinted stamp issue
Quick History
The allied troop occupation of Fiume (November,1918), the takeover by the poet Gabriele d'Annunzio and his legionnaires (1919), and the creation of The Free State of Fiume (1920-24), gave philatelists a stamp issuing entity that, during six years, issued 262 stamps!  Fiume, on the Adriatic Sea, consisted mostly of the city of Fiume.  The city became known as Rijeka after WWII, and today is in Croatia.

Who was in charge during those six years is complicated.  But the reality is the "Free State of Fiume" was recognized internationally in 1920, and lasted until Fiume was annexed by Italy in 1924.

Fiume was  for 140 years nominally part of the Kingdom of Hungary. The city was important, as Fiume was Hungary's only international seaport. And Fiume had a relationship with Hungary where it actually existed as an autonomous entity within the Kingdom.

The city consisted of Croats, Italians and Hungarians during the 19th century. German was also an official language. The population was 45,000 in 1924.

After WWI and the defeat of Austria-Hungary, Fiume was disputed between the Kingdom of Serbs,Croats and Slovenes (Yugoslavia), and the Kingdom of Italy. With the situation in flux, the ultra-nationalist  Italian Poet Gabriele d'Annunzio led the seizure of the city with 2,000 Italian nationalist irregulars on September 12, 1919.

D'Annunzio and his followers wanted Italy to annex Fiume, but Italy refused. In fact, Italy demanded that the interlopers surrender. Subsequently, the Treaty of Rapallo was signed November 12,1920 between the Kingdom of Italy and the Kingdom of Serbs,Croats and Slovenes, which, among other things, set up the Free State of Fiume. This ended the military occupation of d'Annunzio and his troops.

Control of the Free State of Fiume passed internally from group to group. Then Italy and the Kingdom of Serbs,Croats and Slovenes signed the Treaty of Rome on January 27,1923, which  annexed Fiume to Italy, while  nearby Susak was absorbed by the Kingdom of Serbs,Croats and Slovenes. This formally took place on March 16, 1924, with Italian stamps used after March 31,1924.

Subsequently, Fiume again was in play after the defeat of Italy in WWII. With the Paris Peace Treaty of 1947, Fiume (now called Rijeka) became part of Yugoslovia. Today Rijeka is part of Croatia. 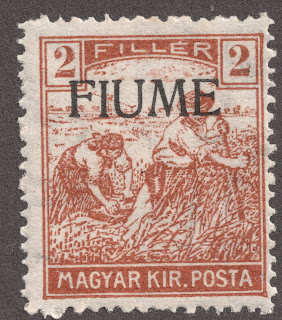 The second concern is "most" stamps of Fiume have been expertly counterfeited. If one is buying a higher priced Fiume stamp, one should have it authenticated. 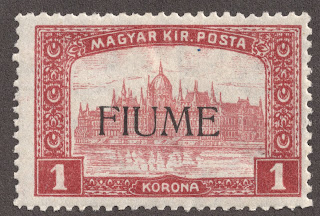 1918 Scott 16 1k red brown & claret
Hungarian 1916-18 stamps overprinted
Fiume's first stamp issue
Fiume's first issue was a 20 stamp series that overprinted 1916-18 Hungarian stamps. The basic designs are shown in the two above images. The overprint is found both typographed and handstamped.  Scott notes "the overprints have been extensively forged". For the collector, one has to assume one has a forged stamp until "authenticated" otherwise. Cold reality.

1919 Scott 27 Fiume 2c dull blue "Italy"
1919 Scott 47 Posta Fiume 10c rose "Italian Flag on Clock-Tower in Fiume"
1919-20 Scott 60 10c on 45c orange "Revolution" Handstamp Surcharged
The 2c dull blue is part of the April,1919 17 stamp issue. This was produced in 3 types of paper, which Scott acknowledges with minor numbers.
In July, an eight stamp issue was redesigned with a "Posta Fiume" inscription.
Then in later 1919, the higher values were given a lower handstamped surcharge. 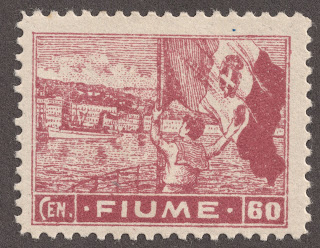 1919 60c claret "Sailor raising Italian flag at Fuime"
This design is part of the first non-overprinted April,1919 issue. All the designs are highly allegorical and nationalistic. 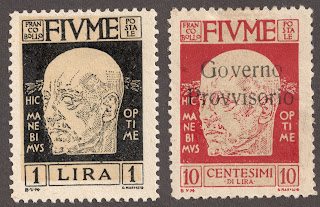 The rise and fall of Gabriele d'Annunzio
September 12, 1920 1 lira black (Note: a forgery)
February 2,1921 10c carmine "Governo Provvisorio"
The September 12,1920 fourteen stamp issue, all with a head bust of d'Annunzio, was issued by the Fiume government to honor the one year anniversary of the nationalistic poet and his legionnaires occupying Fiume.
The February 2, 1921 fourteen stamp issue was issued by the new provisional government (overprinted), after d'Annunzio and his followers were removed by Italian troops.

1919-20  60c on 60c rose "Venetian Galley"1919 semi-postal surcharged
1922 1 lira on 1cor dark slate overprinted
The 12 stamp original 1919 semi-postal issue (not illustrated) was to aid Fiume students in Italy. A 13 stamp issue was then surcharged  "Valore globale" for use as regular stamps. With the new provisional government, a 12 stamp issue (not illustrated) for the first constituent assembly of April, 1921 was overprinted "Costituente Fiumana". Finally, the issue was again overprinted with a "1922" added (illustrated) for the 1922 second constituent assembly. 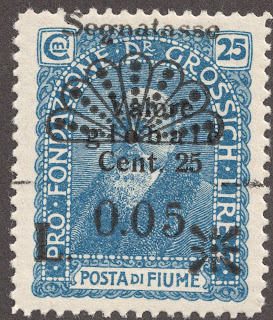 1921 postage due 5c on on 25c blue "Dr. Antonio Grossich"
1919 semi-postal with overprint "Valore Globale" surcharged
One has to admit, this is an interesting stamp for a postage due! 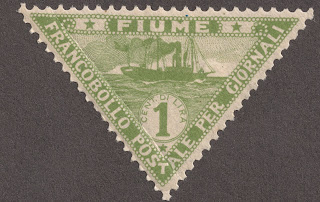 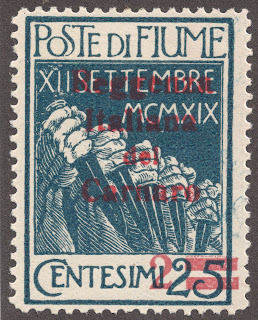 B) Big Blue leaves many Fiume stamps out of the album, often @ $1+. 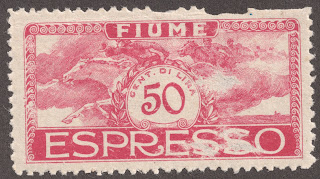 1920 Scott E3 Special  Delivery  50c rose
Out of the Blue
Very interesting philatelic and "real" history. No doubt, many of these stamps were for "propaganda" purposes as one would expect in this revolutionary environment. Perhaps selling all these issues to stamp collectors helped too. ;-)


Note: Map appears to be in the public domain.

The Free State of Fiume
Posted by Jim at 3:20 PM