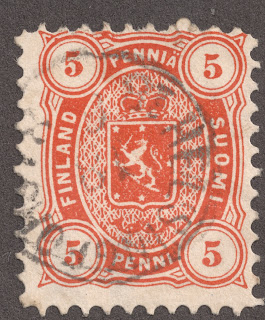 1875-81 5p orange
Coat of Arms of Finland
Quick History
Finland was an Autonomous Grand Principality in the Russian Empire beginning in 1809. Until about 1862, the Finnish authorities emphasized their loyalty to the Russian court. In turn, the Tsar pledged that laws. liberties and religion for the Finnish people would be left unchanged.

Then from 1863-1898, there developed a sentiment for independence, and an increasing nationalism. The Finnish language became co-equal to Swedish. The stamps issued from 1856-1892, and 1895-96 all illustrate the Finnish Coat of Arms. 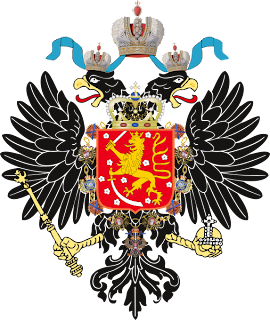 The Russians must have noticed.  ;-)

The Russian emperors then attempted russification of Finland until 1917. This is reflected in the Finnish stamp issues, which look very similar to the Russian Empire issues. 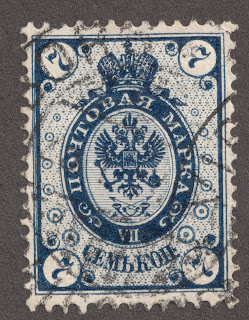 1866-74 5p red brown, 8p black/green & 40p rose "Coat of Arms"
Deep serpentine roulette perforations
The "Coat of Arms" stamp issues of 1856-59 (Imperf-5 stamps), and the 1860-74 issues (Deep serpentine roulette perforations-10 stamps) are attractive and iconic. The least expensive  are the 1866-74 20p blue on blue ($60+) and 40p rose on lilac rose ($70+). They are listed by four types, depending on the depth and shape of the serpentine roulette. Of interest, Big Blue gives these stamps a space, and they no doubt are the most expensive stamps for Finland in the album. The deep perforations can cause perforation teeth to be missing, as can be seen on the stamps illustrated above. 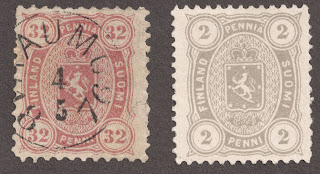 The "SUOMI" inscription is found on many/most Finnish stamps. What does it signify? Well it is Finnish for "Finland". Of uncertain origin, "SUOMI" is thought to have derived from a Proto-Baltic word meaning "land". 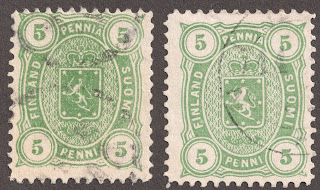 1885 5p emerald
Note the heraldic lion imprint difference?
One cannot help but notice combing through the early issues imprint differences between stamps. Scott makes no mention of major differences, and I don't have a Michel or a specialized Finnish catalogue to consult. So I suspect these are inking differences or "flaws", with the ink bleeding over the design. 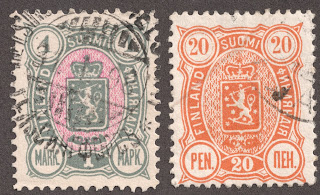 1892 1m slate & rose perf 12 1/2
1895-96 20p orange wove paper perf 14 X 13
New design: One generally needs to pay attention to stamp details for early Finland as the designs can be similar.
But here again there are different year issues with the same design and colors, but different perforations. The perforation gauge should be hot to the touch. ;-) 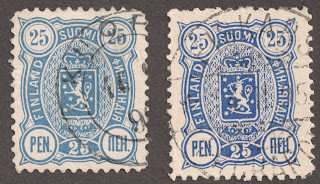 1891 25p ultramarine and 25p blue
Shades can be found among early issues (not just Finland); hence the question: Is it a changeling or a recognizable color variation? Here Scott awards the 25p ultramarine (42) and the 25p blue (42a) their own numbers. 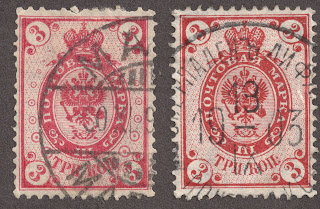 1891-92 Finland 3k carmine and 1889-92 Russia 3k carmine
Here we enter the Imperial Arms of Russia era! I found even carefully put together collections of Finland with  Russian interlopers on the album page, so clearly these designs can be an identification problem for the general classic WW collector.

Scott states: Finnish stamps have "dot in circle" devices or are inscribed "Markka", "Markkaa", "Pen", or "Pennia". A good thing to heed. ;-)

This design is also found on the 1k orange yellow, 2k green and 7k dark blue (The 7k is illustrated in the "Quick History" section). 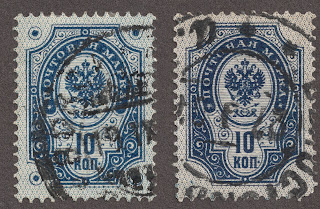 1891-92 Finnish 10k dark blue and 1889 Russian 10k dark blue
The Finnish design here has the "dot in circle" added in each corner compared to the Russian stamp. This design is also found on the 4k rose, the 20k blue & carmine, and the 50k violet & green stamps. 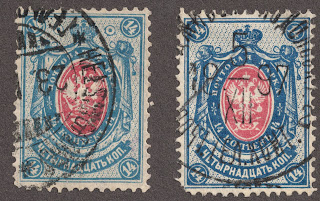 1891-92 Finnish 14k blue & rose and 1889-92 Russian 14k blue & rose
Again, the two "dot in circle" impressions on the upper stamp distinguishes the Finnish from the Russian issue.
This design is also found in the 35k violet & green stamp.

I don't have an example in my collection, but also the larger 1r brown & orange, the 3 1/2r black & gray, and the 7r black & yellow have "dot in circle" changes in design compared to their Russian counterparts. But these stamps catalogue for a minimum of $90+, so perhaps we will not to need to worry about it. ;-) 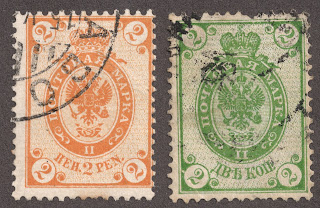 1901 Finnish 2p yellow and 1889-92 Russian 2k green
Recall I said to not always rely on the "dot in circle" to distinguish Finnish stamps? The new "1901 type" issue ( 1901 and 1901-14 redrawn) does NOT have this distinguishing feature. They look remarkably like the Russian variety EXCEPT they will have a change in wording. Note the "Pen" inscription on the lower right portion of the stamp compared to a different inscription wording for the Russian stamp?
Also, as far as I can tell, for the "1901 type" issue, they fortunately always have a different color for the same denomination compared to the Russian stamp. Note the yellow color for the Finnish stamp above compared to the Russian green color. ;-)

Now the 1901 issue (six stamps) was redrawn during 1901-14 (six stamps).  There were also different perforations found. There are plenty of minor numbers found in Scott based on perforation measurements. So definitely measure all these stamps, but I will not say more about that, as I would like to concentrate on the engraving differences found between the 1901 issue and the redrawn 1901-14 issue. 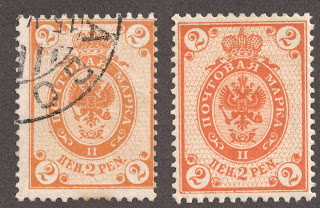 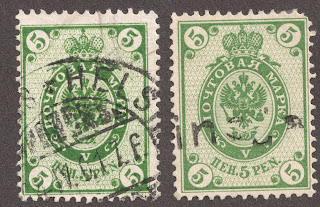 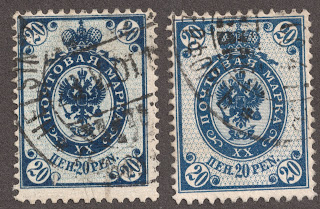 The second difference is found inside the vignette around the Imperial Russian Eagle. There are horizontal central background thin lines noted especially with the 1901-14 issue, while these lines are faint and broken on the 1901 issue. You may have to enlarge the image to see the difference.
This distinguishing difference is more important for the 10p carmine stamp, as that is the only difference between the 1901 and redrawn 1901-14 issue. ;-)
Let's take a look... 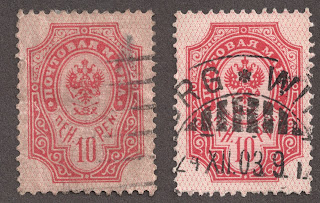 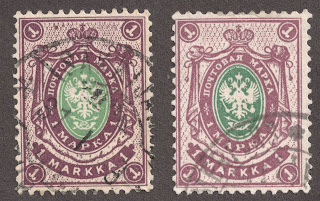 Two examples: 1901-14 1m lilac & green
Different color shades for the central vignette
I don't have an example of the 1901 issue, but note the "1" on either side of "Markka" on the lower stamp? This "1" has a serif at the base of the "1". This makes these stamps a 1901-14 variety. A 1901 variety will not have a serif at the base of the "1"
Note also the color shade differences between the stamps in the central vignette. One can measure the perforations to determine if this could be a violet & blue green Scott recognized minor number variation.

1911-16 40p violet & blue, 5p green, and Russian 1909-12 5k claret
New issue: 1911-16 (5 stamps)
These Finnish stamps are distinguished by the "pennia", "penni" or"pen" inscription wording compared to their Russian brethren. Note also the Russian stamp is in a different color? I believe that is always the case here between the Finnish and Russian varieties.

This issue marks the end of the "Russian" stamp design era. Finland declared its independence in 1917, and the Finnish "Coat of Arms" made an emphatic comeback. 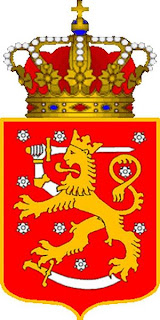 Kingdom of Finland Coat of Arms 1918-19
Out of the Blue
Hope you enjoyed this primer on earlier Finnish stamps during the Grand Principality of Finland era. I learned quite a bit. :-) 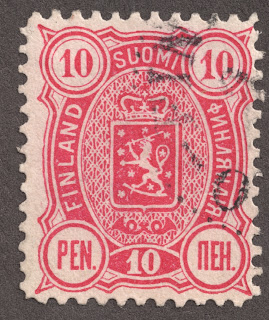 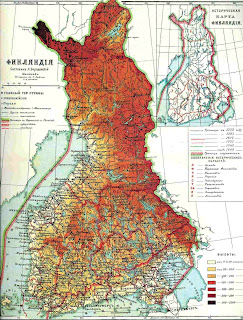 Map and Coat of Arms images appear to be in the public domain.