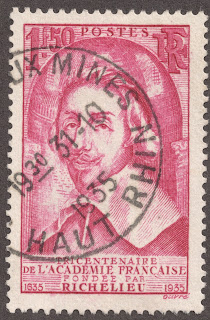 1935 1.50fr deep rose "Cardinal Richelieu"
Tercentenary of founding of the French Academy
Quick History
The end of the 19th century and the beginning of the 20th century was marked by the 1889 Exposition Universelle in Paris and the construction of the Eiffel tower, which, although not intended to remain, has become France's iconic landmark. 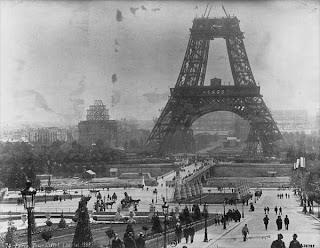 Construction of the Eiffel tower in Paris 1888
This Belle Époque was a  period  known for the cabaret, the cinema, Impressionism and Art Nouveau.

Beginning in 1900,  French stamps expressed universal human egalitarian ideals, represented by the Blanc issue (Liberty, Equality, Fraternity), the Mouchon issue (The Rights of Man), and the Merson issue (Liberty and Peace). These designs on 24 stamps persisted until 1929.

The Sower (La Semeuse), throwing the seeds at sunrise over the land, representing liberty, became the iconic philatelic symbol of the third French Republic for much of the early 20th century. The issue, some 50 stamps, began in 1903 and lasted until 1938.

During this stamp period, of course, WWI was fought with the Western Front largely in France. The fatalities for the French were 1.4 million.

After WWI, the Treaty of Versailles had the French occupy the German industrial Saar region. The German African colonies were divided between France and Britain. Alsace-Lorraine ( lost following defeat in the Franco-Prussian War in 1870) was returned. All of these historical changes of territory should be familiar to world wide stamp collectors.

During the 1930's with Hitler's rise to power in Germany, France had little appetite for confrontation. France tried to guarantee the peace, following the policy (along with Britain), of appeasement. Liaisons were strengthened. If one pays particular attention, one will note stamp issues in the late 1930's that hail the bond between France and the United States, and France and Britain.

But finally, war was declared by France and Britain after Germany's invasion of Poland. But the Blitzkreig conquered Poland after a few weeks, and the attention fell on France. With ten million civilians fleeing south and west, France was surrendered to Nazi Germany on June 24, 1940. Then, Nazi Germany occupied three fifths of France with the Vichy government in charge of the rest.

We will end the story there. 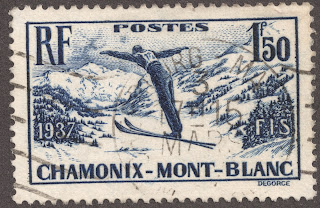 1937 1.50fr dark blue "Skiing"
International Ski Meet at Chamonix-Mont Blanc
Into the Deep Blue
This blog will review the regular French stamp issues between 1900-1940. The next blog will discuss the Semi-Postals, Air Post, Postage Due, and French Offices Overseas issues.

Naturally, since we are only looking at the 20th century, and France has a lot of inexpensive definitive stamps, the affordability values look quite good.

I was struck, though, by how relatively expensive ($1+-$5) the 1930+ commemorative stamps were, even in used condition. Compare that to the minimum value ( 20 cents) many 1930 U.S. commemorative have in the catalogue.

As I alluded, France has many definitive stamps, which generally are not very expensive. France was also late in the game issuing commemorative stamps: the 1924 issue for the Olympic Games in Paris being the first. 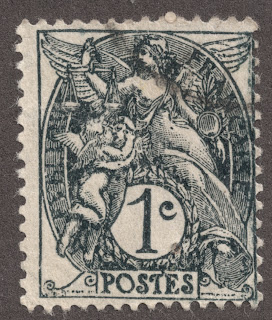 1900-29 1c gray "Liberty, Equality, Fraternity"
Blanc issue
Allegory....an image that contains a symbolic meaning. The French definitives are rich with ideas and meaning in an allegorical sense. No portraits of Kings or Queens for them.

The Blanc issue, as it is known, is a seven stamp production during the years 1900-29. 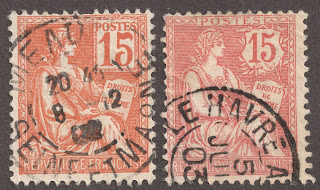 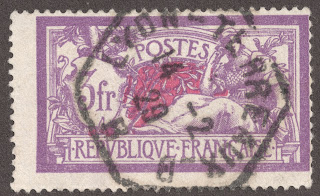 1927 3fr bright violet & rose "Liberty and peace"
Merson issue
The Merson issue, a 12 stamp production from 1900-29, and representing the higher denominations, was printed in two colors as illustrated above.

The three proceeding issues ( Blanc, Mouchon, Merson) are presented in straightforward fashion by Scott. But Maury, over nine pages, breaks them down into many subtypes and variations. A specialists delight. 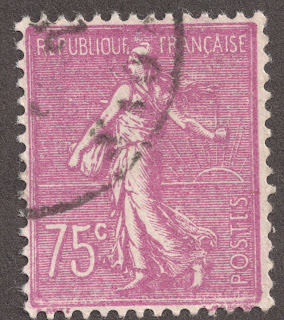 1926 75c rose lilac "Sower"
The "lined sowers" were produced  between 1903-1938
In 1903, a new seventeen stamp definitive series was initiated. These became known as the 'lined sowers", and were produced over a period of 35 years. Notice the early sunrise as the seeds of liberty are sown. What an absolutely captivating image. 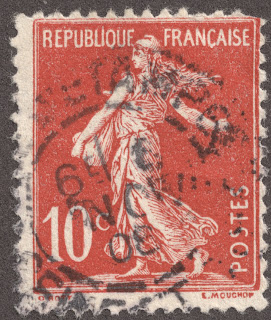 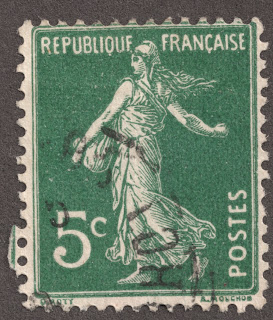 1907 5c green "Sower"
This design is known as the "cameo sowers", issued 1906-37
The "cameo sowers" became the other major design. Thirty two stamps were issued in this series. 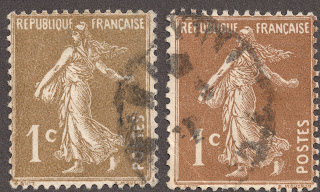 1933  Scott 156 1c olive bistre & 1936 Scott 156a 1c bistre brown
Scott recognizes some color shades, and this is one of them. As one would expect, Maury has many more. This might be a good time to face a truth: Scott only scratches the surface with the Sower definitives. Maury has eleven pages for the sowers, and there are many engraving subtleties to be found. 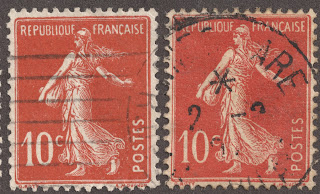 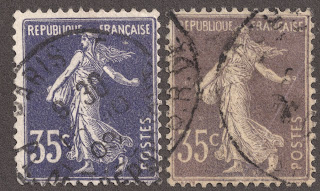 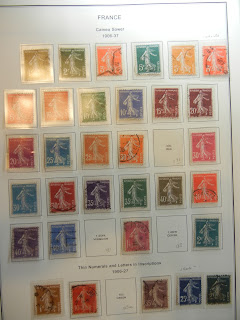 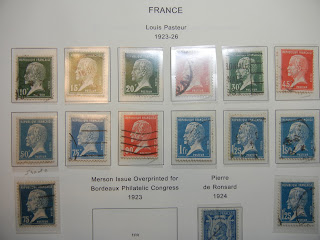 1923-26 "Louis Pasteur"
The Sower series continued to 1937, but there was also a 12 stamp definitive series featuring the great French biologist  Louis Pasteur. So some reason, I'm not as taken with this series.  Perhaps because I like the allegorical designs of the other definitives better. 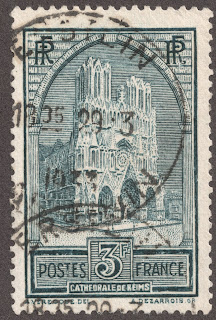 1931 Scott 248 3fr bluish slate "Reims Cathedral"
Die IV
The 1929-32 issue consisting of the 3fr "Reims Cathedral" (4 dies), 5fr "Mont Saint Michel" (2 dies), 10fr "Port of La Rochelle" (3 dies), and 20fr "Pont du Gard, Nimes" (3 dies) all were issued with multiple Die variations. Scott details the differences. The"second story" leftmost turret (facing the front) has a "window" with three vertical lines-two heavy longer lines on other side of a thinner shorter line. Enlarge the stamp and find the area. That defines Die IV. The other three dies all only have two lines for the window, missing the thinner shorter line. 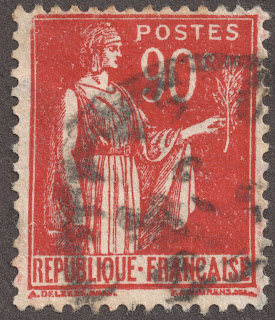 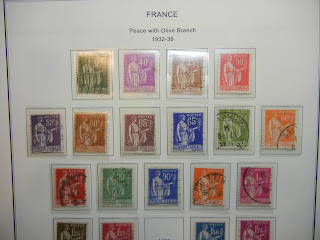 1932-39 "Peace with Olive branch" issue
This really is a lovely and poignant series. Clearly, though, the sentiment and offer was not not heeded, as France soon was plunged into war. 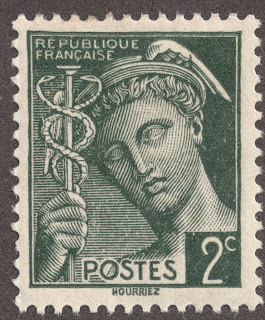 1939 2c slate green "Mercury"
1938-42 definitives
Then, on the eve of WWII, France produced the "Mercury" definitives, an image from roman mythology. Outstanding. 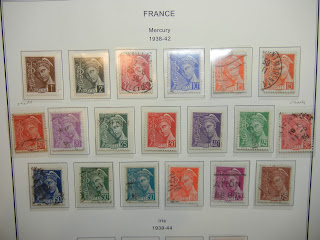 1938-42 "Mercury"
This seventeen stamp issue, produced on the cusp of WWII, demonstrates that the French engravers were still at a superb level. Wow! :-) 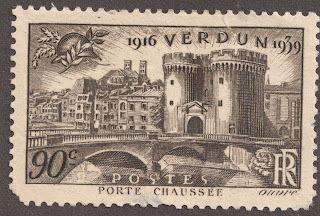 1939 90c black brown "Porte Chaussee, Verdun"
I mentioned earlier that the French commemoratives did not really begin until the 1924 Paris Olympic games. But the French made up for the late start with well designed and themed commemorative issues through the rest of this time period. Take a close look at the above issue, as well as the other commemorative illustrations in this blog, and see if you don't agree. :-)

Deep Blue
Naturally, Deep Blue provides a space for all the major Scott stamp numbers. Essentially, Deep Blue follows the Scott format almost exactly, so quite easy to put the stamps into the album.

Deep Blue does break out the minor number thin numerals variety ( 10c and 35c ) Cameo Sower stamps.
Also, Deep Blue has the option of adding pages (stamp spaces) for the gray poor quality paper varieties issued from 1916-20 during WWI.  These are known as G.C. (Grande Consommation) varieties, and given minor numbers in Scott.

Since Scott now has the Parcel Post issues listed, Deep Blue has the option of adding those pages.

Clearly, if one was following carefully the French Maury catalogue  for the Sower issues, Deep Blue (as it follows Scott) would have a truncated layout. The difference in engraving details of this long lived issue as presented by Maury is stunning.  ;-) 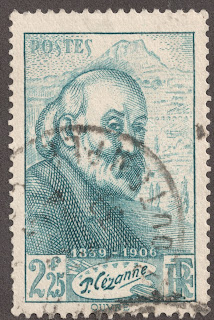 More specifically, reviewing the lined and cameo sower definitive stamps of 1903-38, there are 47 spaces.
The issue consists of 50 stamp descriptions. Coverage is 94%. Essentially Scott 162b,163a, and 175b, the thin numeral varieties of the 10 red, 10c green and the 35c violet are not included.

The good news is Big Blue has nice coverage. But not including a space for the thin numerals also demonstrates Big Blue's limits.

Comments
A) Expensive stamps ($10 Threshold) include: 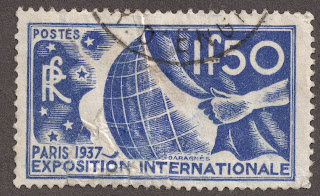 1936 1.50 ultramarine "Allegory of Exposition"
1937 Paris Exposition
Out of the Blue
The French- their stamp production is done...


Image appear to be in the public domain.

If you enjoyed this blog, I would like to hear from you!