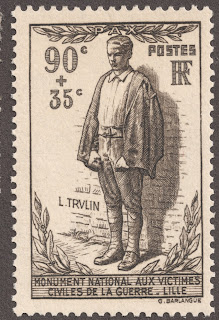 1939 semi-postal 90c + 35c black brown
"Civilian facing Firing Squad"
Quick History
The Third French Republic existed from 1870 until 1940 and the conquest by Germany. France is the largest western European country, and in 1936 the population was 42,000,000. Paris is the capital.

The State is governed under the fundamental document of the French Revolution, The Declaration of the Rights of Man and of the Citizen. This Declaration derives from the philosophical thinking of the Age of Enlightenment, and shares the principles of human rights with the U.S. Declaration of Independence. The rights of man are considered universal, valid in all situations, places and times.

It is helpful to be aware of the Age of Enlightenment human rights declarations and beliefs, as much of the allegorical imagery found on the French definitives, and French stamps in general, refer back to these principles. 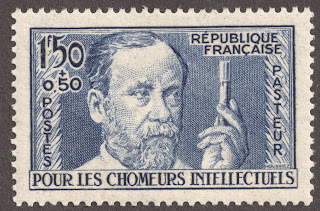 1936-37 semi-postal 1.50fr + 50c deep blue "Louis Pasteur"
Surtax used for relief of unemployed intellectuals
Into the Deep Blue
This is the third blog on French Stamps, and I will review the non regular, or "Back of the Book" issues. I  don't have some of the categories (Occupation stamps, Parcel Post stamps), so will say little about those. Also, there are a lot of "Offices Abroad" stamps in both the Scott catalogue and in albums. It is my experience that, unless one specializes in this area, not a lot of stamps are actually found in general classic era albums in this category.  :-)

Affordable collectability
These are the categories, and the total number of major stamp descriptions in the Scott catalogue...

Parcel Post 1892-1939: 159 stamps; of those 64 are  <$5. Affordability Index = 40%
Comment:  Deep Blue does not include the PP category in the main classical download, but does have the option of downloading separate pages for PP. I have no PP stamps in my collection. I wonder if the PP category was a recent addition to the Classic Scott catalogue? Clearly, these French Parcel Post stamps are not found as commonly as the Belgium Railroad/Parcel Post stamps. I hate to be critical, but these PP stamps are not very attractive to me, and they are not inexpensive. I'm not sure I will collect them.

Offices in China
A large number of issues are represented in Scott. As I noted above, not many of these stamps are found in general WW collections in my experience

Total China: 713 stamps; of those 277 are <$5. Affordability Index = 39%.
Comment: A very large group of stamps; a representative collection might suffice. 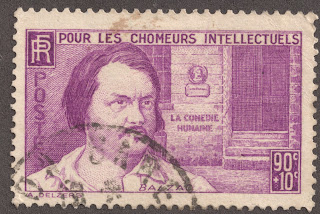 1939 semi-postal 90c + 10c bright red violet
Honoré de Balzac
Although France was late with the commemoratives, since 1914, they have had a reasonable output of semi-postal stamps to raise funds for various causes. One of the more interesting causes, with three issues, is a surtax for unemployed intellectuals. One of the stamps is illustrated above, and the Pasteur semi-postal illustrated elsewhere in the blog is from another issue. I can't imagine the U.S. having a stamp issue for a cause like that. ;-) The French take their intellectuals, artists, and scientists seriously. 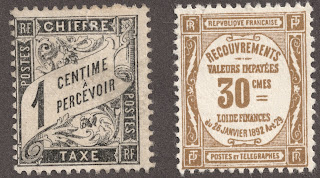 1882-92 1c black postage due & 1909 30c bister "recouvrements" stamp
The left stamp is a postage due, not too out of the ordinary. But the right stamp is a "recouvrements" stamp. This stamp was intended to recover funds from the sender if the letter or parcel was returned to the sender if it couldn't be delivered or was refused. Perhaps other countries do this, but France is the first for the classic countries and this blog. 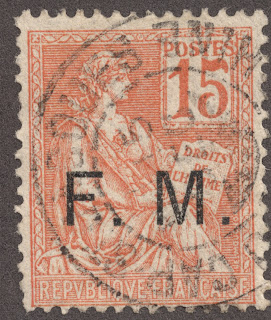 1901 15c orange overprinted "F.M."
Military stamp: Franchise Militare
I haven't seen this category before, but France has issued overprinted stamps to be used by the French military from 1901-39. Interesting.

Offices in China
Kwangchowan: 1923 1/5c blue & black with red overprint
Kwangchowan: 1927 1/2c yellow with black overprint
Yunnan Fou: 1908 4c blue & black with red overprint
The Offices in China issues (713! stamps) were produced between 1894-1922 by France for seven locations in China to receive and send overseas mail. The stamps of Indo-China were generally overprinted or surcharged for this use. Not found in abundance in most general collections, one will need to pursue and acquire these fascinating stamps. 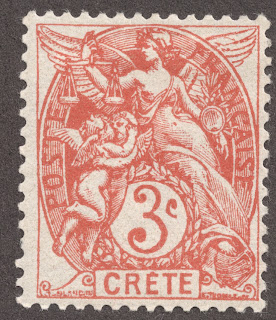 Offices in Crete
1902-03 3c red orange "Liberty, Equality and Fraternity"
During the period (1902-03) when Crete was autonomous, France, Austria, Italy, and Britain maintained their own post offices. France issued 20 stamps. 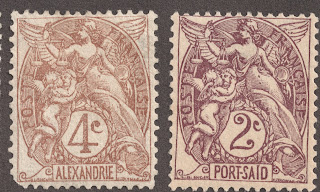 
Deep Blue
Deep Blue of course has all the major number Scott spaces-1540 for BOB! No surprises, although the parcel post stamps need to be separately downloaded. In contrast, Big Blue provides 453 spaces for the BOB stamps. 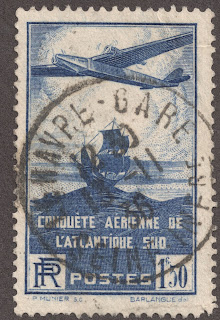 Offices in the Turkish Empire: one page and 38 stamp spaces.
Includes coverage of Levant, Cavalle, Dedeagh, Port Lagos , and Vathy.

Note: Big Blue has spaces for "Offices in Morocco", but I will cover those stamps in a separate blog for two reasons.
1) True, there are "French offices in Morocco" stamp issues from 1891-1917, but then Morocco became a French Protectorate 1914-1942 with many stamp issues.
2) Scott has Morocco listed under its own title as "French Morocco".

Also I noted a quite different layout for the earlier issues in the '41/'47 editions compared to the '69 edition. However, I didn't do further investigation.


B) Caution on "Offices in Zanzibar" section: possible confusion... 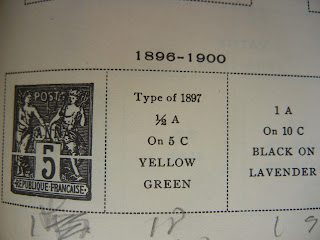 Offices in Zanzibar Scott 1, 18, 19
The overprint is different for the descriptive spaces
Watch out for the Scott 1,18,19 spaces.  The Scott 1 (with illustration cut) shows an overprint "1/2 ANNA". The Scott 18 and 19 actually have an overprint that adds "ZANZIBAR". 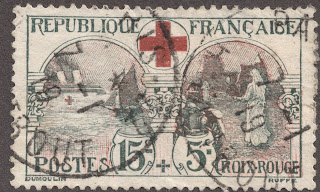 1918 semi-postal  B11 15c + 5c slate & red
"Hospital Ship and Field Hospital"
Out of the Blue
It has been a bit of a marathon putting these three blogs together to cover France. But I now have a better understanding of these well designed issues.