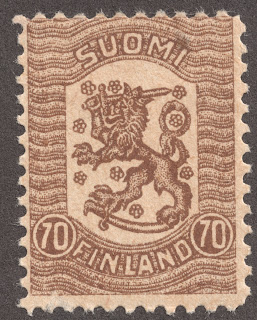 1918 70p gray brown
"Arms of the Republic"
Quick History
When the October Revolution occurred in Russia, Finland declared independence on December 6, 1917. But a civil war broke out in Finland between the Whites, who had the support of Imperial Germany, and the Reds, with the Whites prevailing. The enmity between the Whites and Reds strained the social and political fabric of Finland for many years: well until the Winter War with the Soviet Union (1939-40) and beyond.

In 1917 the population was 3 million, and of course Helsinki was the capital.

But Finland after 1917 was now independent. After a short monarchy, Finland became a presidential republic. The relationship with the Soviet Union continued to be tense.

During WWII, Finland fought the Soviet Union in the Winter War (1939-40) and the Continuation War (1941-44). As a result, Finland was forced to cede Karelia, Salla, and Petsamo to the Soviet Union. 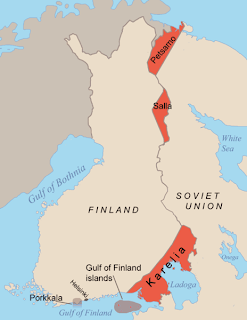 Areas ceded to the Soviet Union 1944

But Finland was never occupied by the Soviet Union and maintained its independence, but at a cost of 93,000 soldiers killed.  Finland also forced the Germans out of northern Finland in the Lapland War (1944-45). 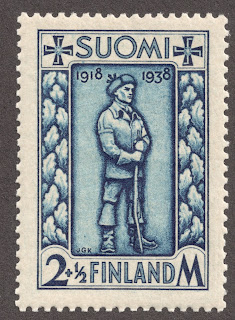 In addition, Finland has issued from 1922-1940 some lovely 43 semi-postal stamps; many for the benefit of the Red Cross. 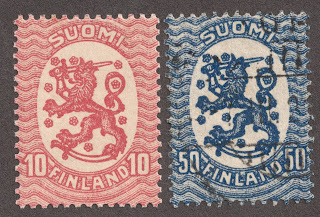 1917 10p rose & 1919 50p deep blue
Arms of the Republic
The iconic designed 1917-29 Helsinki issue was the first for this newly independent republic. It features the heraldic Finnish lion without the crown seen in earlier issues. This 26 stamp issue was unwatermarked, and generally is perforation 14. Some stamps also come in perforation 14 1/4 X 14 3/4, and are given minor numbers in Scott. 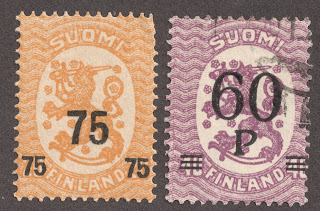 1919 75p on 20p orange & 1921 60p on 40p red violet
There are eight stamps of the "Arms of the Republic" design that can be found surcharged in 1919 and 1921. Presumably, this reflects the inflation occurring in central Europe during this time?

Insignia used by the Finnish Air Force 1918-45 as a good luck symbol.
Nothing sinister about it.

Of interest,  the 1927-29 issue reverts to a more familiar  "post horn" watermark.
The (Stamps)  image above also illustrates two types of 40p inscriptions: the type I -a thin figure of value; and type II- a thick figure of value. 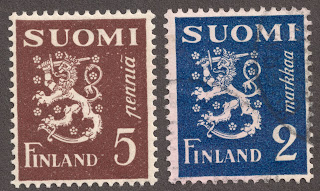 1930-46 5p chocolate & 2m indigo "Arms"
The second major definitive series was first issued in 1930, and repeats the heraldic Finnish lion design. This issue had 38 stamps! BTW, I read an amusing anecdote that at one time a bear rather than a lion was suggested as the Finnish symbol. After all, there are plenty of bears in Finland, and no lions. ;-) But the bear was too closely associated as the Russian symbol, so the idea was dropped. 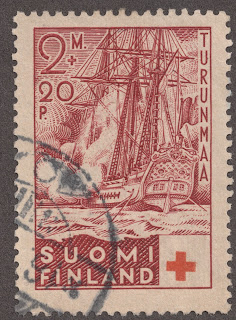 1937 2m +20p brown lake "Turunmaa"
Finally, as an example of the beautifully designed semi-postals of 1922-40, here is the 1937 "Turunmaa" stamp. Most of the semi-postals issued by Finland were for the benefit of the Red Cross. Wow! Gorgeous!

Deep Blue
The Deep Blue album, on 22 pages, provides space for all the major Scott numbers. Particularly appreciated is the separate 1941-46 "Arms" page, which gives spaces for the "Arms" definitives issued during those years. 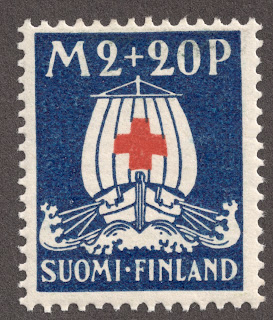 E) ( ) around a number signifies a blank space choice 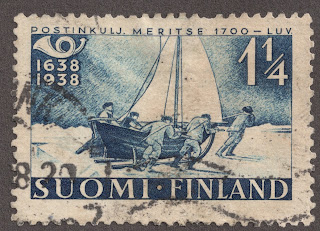 1938 1 1/4m dark blue
"Mail delivery in 1700"
Out of the Blue
Iconic designs, inspirational history, and generally inexpensive. The earlier issues require an attention to detail, and an awareness of the Russian "look alikes". A great and rewarding philatelic country.

Note: Maps and image appear to be in the Public domain. 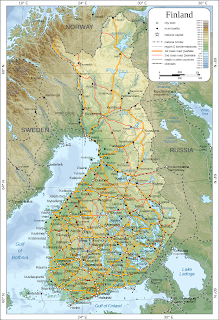