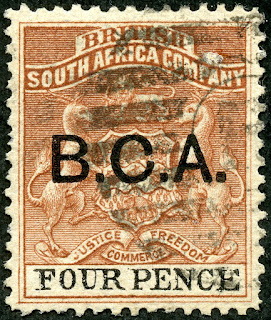 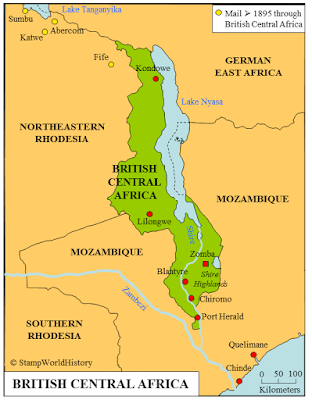 In 1907, the territory was renamed the Nyasaland Protectorate. It is now present day Malawi (1964). 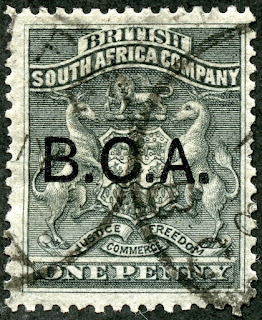 CV ranges from $5 to north of $4000. But the higher denominations with fiscal cancellations are found more commonly, and sell for a fraction of the CV of those with postal markings. 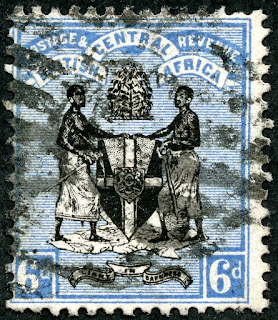 1895 Scott 24 6p ultramarine & black , Unwatermarked
"Coat of Arms of the Protectorate"
A new lithographic issue proper for British Central Africa of eleven stamps featuring the "Coat of Arms" for the protectorate was released on unwatermarked paper in 1895. (Scott says the issue is typographic, but is clearly wrong.)

One needs to check for a lack of watermark for this stamp issue, as the next similar issue (1896) is watermarked (Wmk2, Wmk 1 sideways).

Again, one should note that the higher Shilling and Pound denominations were used for fiscal purposes, for the most part, and fiscal cancellations (undated double circle cancel with the words "British Central Africa" between the circles, and a town name in the center) sell for much less than the CV in the Scott catalogue for postally used stamps. 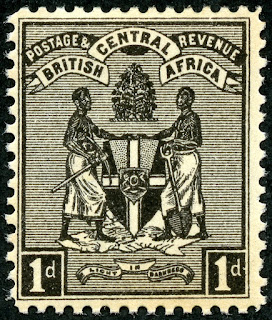 What about the "Coat of Arms" design?

"A motto “Light in darkness” (irony noted) is inscribed beneath a coat of arms on the 1895-96 stamps, although dropped from those that follow. Two Bantu men stand on tiger pelts holding European-style mining tools but, as it turned out, prospecting was bleak." 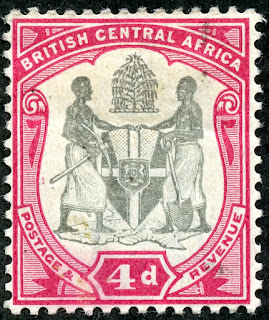 1897 Scott 46 4p carmine rose & black, Wmk 2
"Coat of Arms of the Protectorate"
Between 1897-1901, a fourteen stamp typographic bi-color issue, still showing the "coat of arms", but changing the frame design, was released. 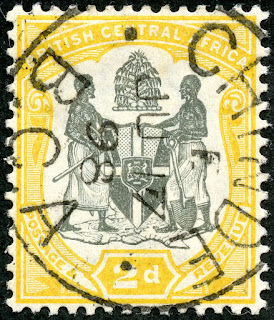 Chinde was a port for British Central Africa  on the Chinde channel in the Zambezi delta, and was located  40 miles south of Quelimane in Mozambique (Portuguese East Africa).

So why is there a BCA stamp and postmark for Chinde deep into Portuguese Mozambique territory?

Because, as part of the Anglo-Portuguese Treaty of 1891, the British obtained a 99 year concession to establish a port (Chinde) where the ships could transfer their cargoes to river steamers.

By 1922, however, the rail link between the port of Beira and Nyasaland made the Chinde concession moot, and the lease was cancelled, and the port reverted to Portuguese control. 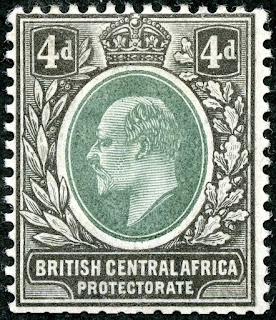 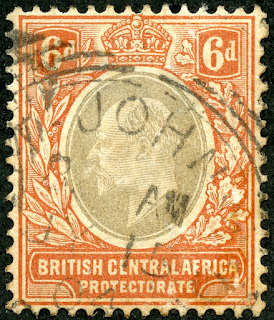 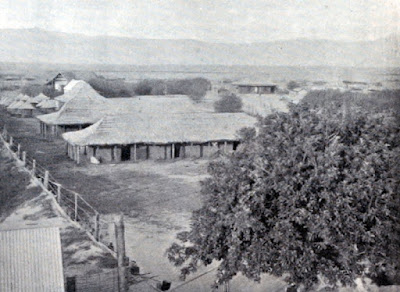 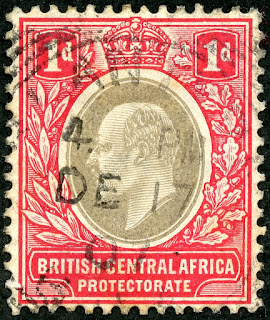 British Central Africa stamps were replaced by those of Nyasaland Protectorate in 1908.

1903-04 Issue in Deep Blue
Five pages are offered by Deep Blue (Steiner) for the 1891-1907 stamps of British Central Africa. All of the (Scott) major numbers have a space. Because of the cost of BCA stamps, the WW collector may find a surfeit of empty spaces. ;-) 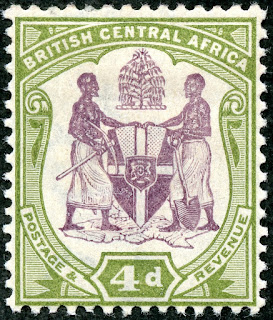 1901 Scott 47 4p olive green & violet  Wmk 2
"Coat of Arms of the Protectorate"
Out of the Blue
This little dead country could offer a lot of interesting history/postal history.

Note: Pic and map appear to be in the public domain.