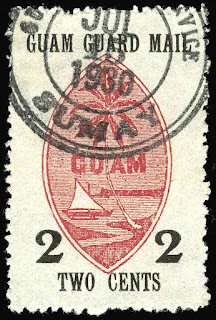 When I look at Guam stamps I get an earworm; sticky music, some people call it, or Involuntary Musical Imagery (INMI). I always hear Tevye’s Yiddish lament “If I were a rich man” from Fiddler on the Roof (in Zero Mostel’s voice). Can’t help it. Can’t get rid of it.

Worse, since I, too, am not a rich man, I never buy the Guam stamps I’d like to have. What might those be?

If I were a rich man,
Daidle daidle deedle daidle duam
On eBay I'd biddy-biddy-Guam.
If I were a wealthy man… .
Lord who made the lion and the lamb,
You decreed I should be what I am,
Would it spoil some vast, eternal plan
If I had a few more Guam?

Jim's Observations
The 1898 Spanish-American War resulted when the United States, after the unexplained sinking of the American battleship "Maine" in Havana Harbor, demanded that Spain immediately surrender control of Cuba, and Spain refused.
The result of the war was that Spain lost sovereignty over Cuba, and ceded the Philippine islands, Puerto Rico, and Guam to the United States for $20 million dollars.
The capture of Guam during the war is almost comical.
On June 20, 1898, Captain Henry Glass, with the armored cruiser USS Charleston, entered Apra Harbor. The Cruiser then fired a few cannon rounds at Fort Santa Cruz but nothing happened.
Two local officials, believing the cannon fire was a salute, and unaware that war had been declared, came out to the Charleston to apologize for not being able to return the salute.
Captain Glass informed them that Spain and the U.S. were at war.
The next day, the surrender of the island was arranged with the Spanish Governor, and the 54 Spanish infantrymen were sent to the Philippines as prisoners of war.
No U.S. military were left on the island. The only U.S. citizen on the island promised to keep an eye on things until the U.S. forces returned. 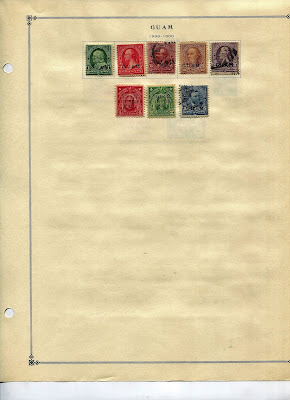 Comments appreciated!
Posted by Jim at 7:00 AM No comments: Links to this post 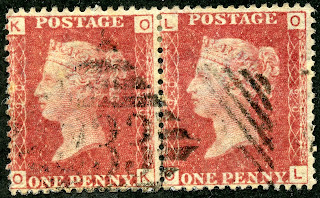 Altogether, there are 240 stamps in the sheet that can be identified by position with these letters. 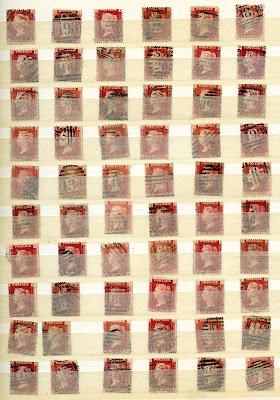 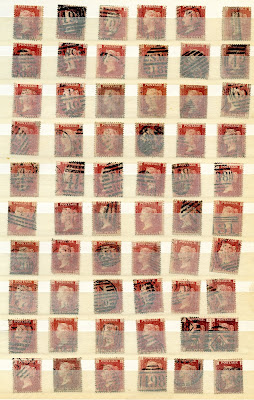 AG-AL...JG-JL Sheet portion
Certainly, price wise, it could still be done today by the WW collector, as the basic CV for a Penny Red is only $2+. What a challenge! 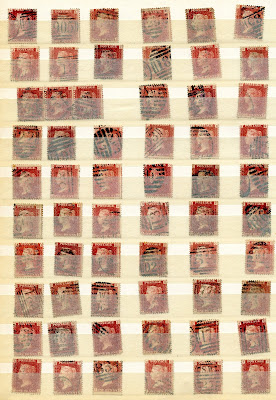 KA-KF...TA-TF Sheet portion
Well, is that what I have done? After all, I'm showing here a reconstructed 1864-1879 Penny Red sheet! 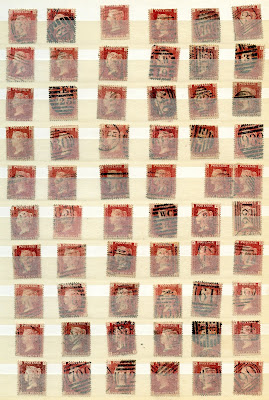 KG-KL...TA-TL Sheet portion
Alas, I cannot take credit for it. Perhaps five years ago, I bought the reconstructed sheet for a nominal bid price (I don't even remember how much) at our local stamp club auction.

Thank you to the previous collector who spent many hours necessarily putting this together!

Perfins on Penny Reds
Well, what further study can be done on the 1864 Penny Red?

Obviously shades. Scott lists rose red (major number) and brick red and lake red. As we present the many examples following of the Penny Red for this post, it appears that there may be even more shades.

One could identify the numeral cancel postmarks by town or post office station. I could, but I won't at this time. However, if the reader wishes to identify the towns, please post them in the comments section, - that would be great!

It turns out that all of the 1864-1879 Penny Reds have embedded in the scroll work on each side of the stamp, the plate number!

Plate 77 was also rejected, but some got out. One specimen is in the Tapling Collection, and there are eight or nine others that are known. In 1944, a copy (Stamp MI) was found in a box among a million stamps sold. So, they are out there waiting to be discovered. !!

(For a heated discussion about the validity of a recent "plate 77" find, see this thread on the Stampboards.com forum. More here.)

Expert: Plate 77 is extremely rare. You have a snowball's chance in hell of finding one.

So, since I have a chance, let's examine all the plate numbers for the Penny Red Reconstruction Sheet. 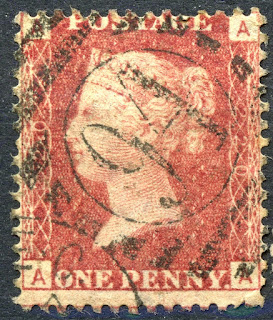 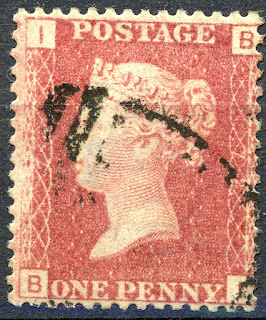 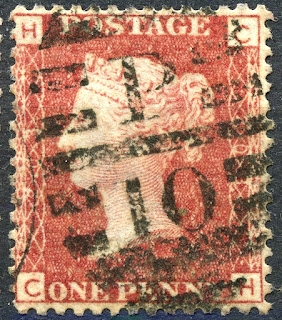 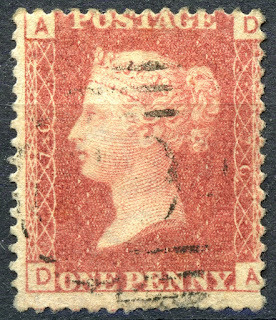 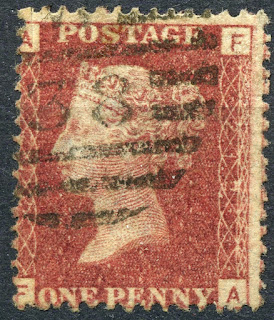 FA - Plate 212
The lake red color is seen on this late plate. Recall that the numbered 200+ plates often have a higher CV. 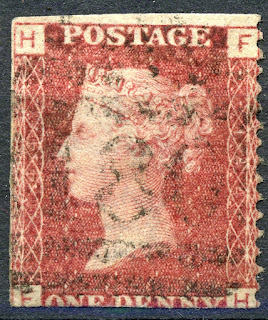 FH - Plate 144 CV $26
This plate is one of the higher valued found in the reconstructed sheet. This particular example may have been cut on three sides. I should mention, as an aside, that there are imperforated specimens known for 48 plates - see SG (very high CV). 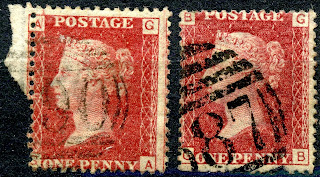 All are nominal $3. But among these, are a forger's dream. 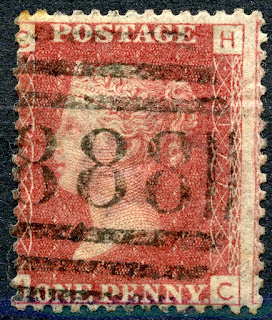 A lot of value here. 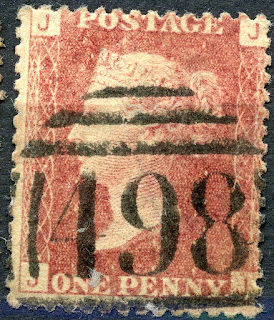 One can check the numeral cancellations for towns and post office stations.

And see "JJ"? Those are my initials!  Did you find a stamp embedded within the constructed sheet that represents yours? 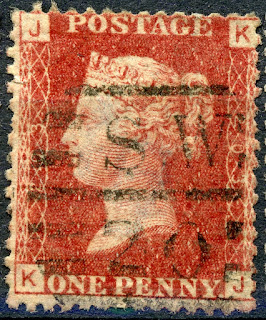 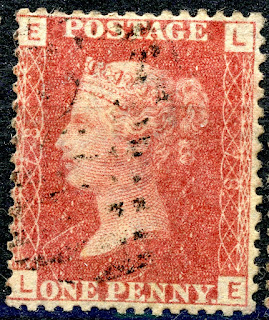 I suppose the problem with higher CV plates is, if you were going to sell them, most customers would want certainty and not a "?" specimen. ;-)

Attached MA-MB-MC (164?)
For plating other early issues, having attached strips is invaluable. For the 1864-1879 Penny Red, that luxury is not so much needed, as all stamps can be placed within a plated sheet by using the corner letters. 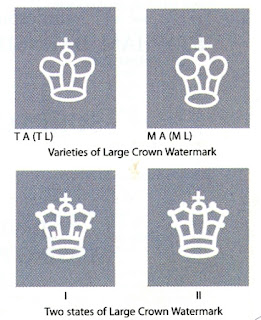 Large Crown Wmk Varieties
A variety of watermark can be found on MA (ML) up to plate 96. Unfortunately, I don't have any examples. (The TA (TL) variety doesn't show up on the 1864-79 Penny Red issue.) 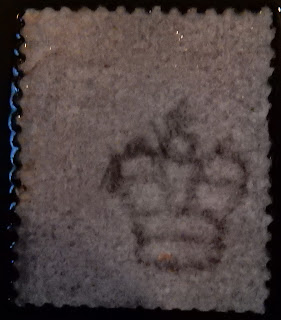 Inverted watermarks exist for most of the plates - worthwhile checking one's collection.

What are the problems with identifying the plate numbers? For one, the engraver may have done a poor job with engraving the plate numbers. And the numbers are difficult to discern not infrequently. A "0" can be a "8" or a "6" or a "3", or vice-versa. A "1" can sometimes be mistaken for a "7" or a '4" or vice versa. In my experience, only the "2" is usually without confusion. 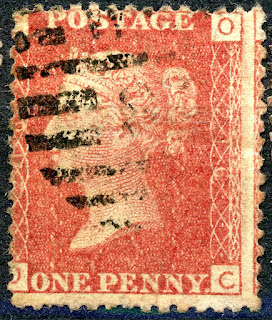 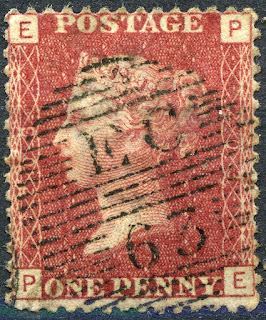 I should mention that all the Victoria Head portraits for the 1864-79 Penny Reds are  the re-engraved type.

The only error the previous collector made with the sheet reconstruction: He placed an FG stamp where a PG stamp should go.

PJ (174) -PK (140) -PL (--)
Clear Cancels
This is beyond the plate identification topic I'm covering here, but be aware that attractive town cancellations and circular datestamps also command a premium.

Changing the topic, are you getting bored with the relative simplicity of the 1864-79 Penny Red issue? 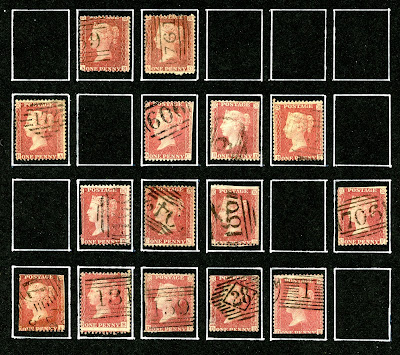 1841-1858 Penny Reds
One-tenth of a sheet (Upper left hand corner)
Perhaps you would like something more challenging, such as the 1841-58 Penny Reds? 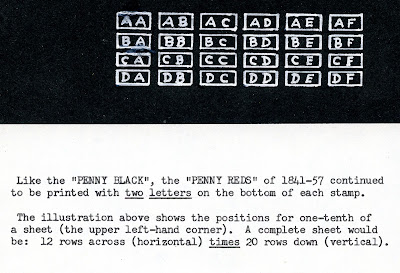 Although reconstructing a sheet for the 1841-58 Penny Reds is no more difficult than for the 1864-79 Penny Reds, the expense would be more. CV ranges in the $10 category on up for each stamp.

The real challenge comes with plating. 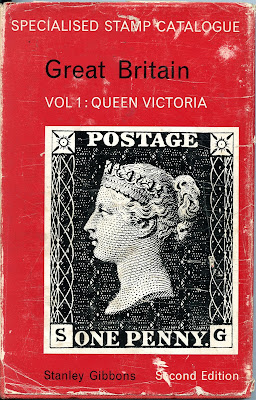 SG Volume I Queen Victoria Catalogue
Each stamp is usually identified plate wise by the position and shape of the bottom corner letters. One will need a good reference source, such as the catalogue above. Of interest, some of the plates used for the Penny Black (Plate 1b, 2,5,8,9,10,11) were also used for the Penny Red. 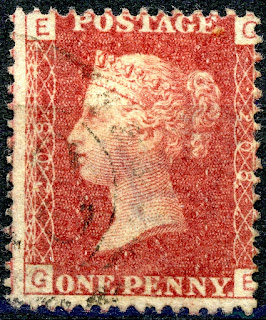 And there were plenty of higher valued Penny Red plates found.

Hope this little excursion will whet your appetite for your own exploration of the Penny Reds.

Note: All the stamp scans are mine, except the watermark "Large Crown" diagram is from the SG 1840-1970 British Commonwealth catalogue, and is used here for educational purposes.

Comments appreciated!
Posted by Jim at 7:00 AM 2 comments: Links to this post