Commemorating the split
Bud's Big Blue
Bud's Observations
When European nations began colonizing, a political scheme that followed their “discovery” of much of the world, they divided up the map with frontiers -- boundaries that made commercial, administrative and military sense to them. Not so to indigenous people. Earlier inhabitants organized in blood-bound spheres, dynastic clans, or chiefdoms that centered around traditional leaders. Frontiers were, if existing at all, fuzzy and changeable.

Years later, when colonies declared independence, the democratically elected leaders normally kept the colonial boundaries, a decision that repeatedly gave rise to grisly ethnic strife among ethnically loyal peoples. The leader’s tribe got to eat; other tribes might not.

Gilbert and Ellice Islands provide an exception. Upon obtaining independence from Britain (1976), they split. Not enough gum on all the crowned head stamps in BB to hold them together, I suppose.

Classic era stamps follow the normal colonial pattern -- overprints on British royal portraits for the first issue (1911; on Fiji stamps in this case) followed by a pandanus palm properly inscribed for the colony (also 1911). The pandanus stamps shortly were replaced by new royal portraits and eventually by royals peering at local scenery, sometimes at another pandanus. Pandanus is a tropical staple. The leaves, fruit and flowers are eaten and the leaves used for fragrance, basket weaving, roofing, etc.

BB’s editors omit the 1935 common design for the Silver Jubilee. I wonder why.

Census: 28 in BB spaces, five on the supplement page (four being Silver Jubilee stamps). Since the scans were made I’ve added five more, including three Fiji overprints.

Jim's Observations
The Micronesian Gilbert Islands and the Polynesian Ellice Islands, located in the Pacific Ocean between Hawaii and Australia, began as a protectorate in 1892, and then a British colony from 1916 until 1976. Thereafter the Gilbert Islands became the majority of the island nation of Kiribati (pronounced "Kirr-i-bas") in 1979, while the Ellice Islands were renamed Tuvalu in 1978. Both are currently members of the Commonwealth of Nations. 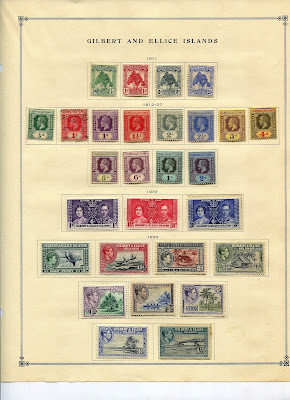 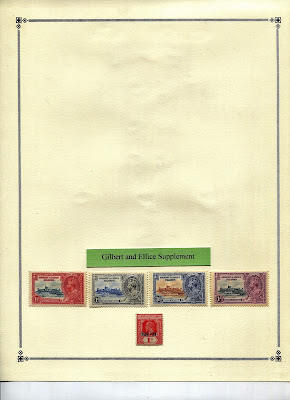