How did my collection grow this past 2016 year? 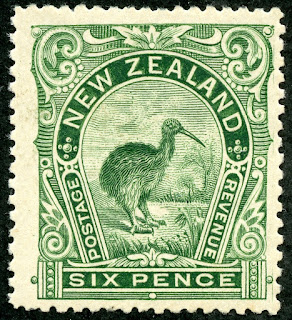 New Zealand 1898 Scott 78 6p green "Kiwi"
Into the Deep Blue
Part of the fun of collecting, at least for us obsessive-compulsive types, is checking on the growth of the collection.
The time era limit of my WW collection is 1840-1940, with an extension for British Commonwealth through 1952. The ultimate collection, 100% filled, would have 83,507 (Scott major number) stamps. Needless to say, that, as a goal, will never be reached. And that is not where the gratification is anyway, the "Journey" is. !!! 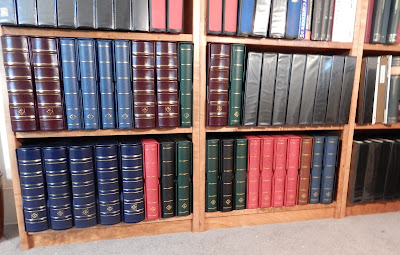 "Deep Blue" in Vario F, G and Avery Binders
The stamps are kept in "Deep Blue", the name for my 6,500 Steiner album pages, presently in 10 Vario G, 19 Vario F, and 21 Avery binders. (I'm converting gradually to an all Vario G and F binder collection.)

But additionally, I keep track of (and actively collect as a realistic goal) all the stamps that will fit into Big Blue, the Scott International Part I 1840-1940 album - some 34,876 spaces. My "virtual" Big Blue collection, housed within Deep Blue, is based on the checklist  I have developed for the stamp spaces in BB.
Well, how did I do?
To recall, the 2015 year started with 39,632 major Scott number stamps, and ended with 42,734 - a 3,102 stamp increase.

My Deep Blue currently has 56% of the spaces filled with stamps.

My general objective is ~100 stamps/month (~1200/year) addition into the virtual Big Blue.  I met the objective, although note the increase was about ~500 stamps less than in 2015.

The difference may be because my stamps came from a different mix this year. For 2016, I was breaking down a lot of feeder collections.  In contrast, in 2015, I was accumulating more from virtual Big Blue want lists.

The others on the list (Turkey, Uruguay, New Zealand, Italy) were likewise from feeder collections for those countries.

For a closer look, I will present some of the countries on the 100+ stamp list, as well as selected other countries that have an interesting story to tell.
For an overview of all the countries in Big Blue/ Deep Blue, see the ......
Status of my Deep Blue & Big Blue Collections post. (Updated monthly.) 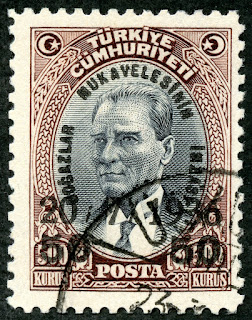 Turkey 1936 Scott 780 50k on 500k chocolate & black
"Mustafa Kemel Pasha"
Turkey
I bought from a dealer a large KA-BE Album 1863-1980 Turkey collection. This was a quality collection, and had recently been sold in January, 1915 at a Regency-Superior auction.

It yielded 249 stamps, the largest amount for any country for 2016.

I think a fine way for the intrepid WW collector to obtain stamps is by buying country collections. Besides the holes I filled, I upgraded many more spaces. 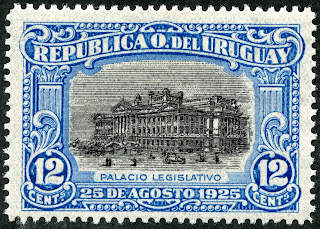 In fact, this year was "the year of dealer acquired collections". I bought very little from the APS stamp store or from e-Bay. 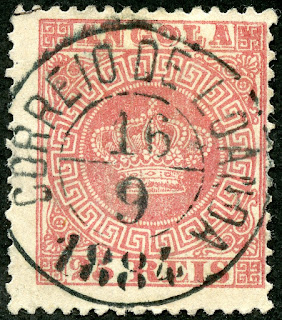 I was relatively weak in Portuguese colonies, so this collection helped a lot. 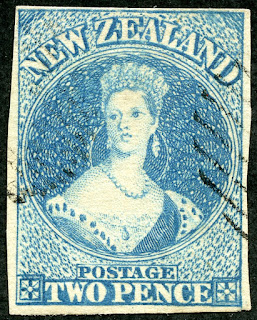 New Zealand 1858 Scott 8 2p blue "Victoria"
New Zealand
Do not forget other collectors as a source for stamps!

Our local stamp club has a club auction several times a year, and we have many collectors getting on in years who are quite willing to off-load parts of their collections.

Not uncommonly, the stamp accumulations are auctioned off for virtual give-away prices. !!

And, as a WW collector, one is positioned to find worth with many of the lots.

Long story short, I obtained an accumulation in a bankers box of Australian and New Zealand stamps. In this case, there was spirited bidding (There was clearly a number of New Zealand Chalon-head "Victorias" in the accumulation), but it was still a bargain.

The accumulation yielded 147 stamps for New Zealand, and 45 stamps for Australia that were new for me. 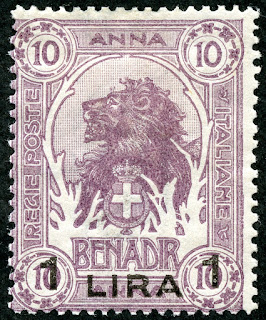 Somalia 1906-07 Scott 16 1 l on 10a lilac "Lion"
Surcharged
Somalia
A  general collection of Italy and Italian Colonies in a Scott Specialty album was obtained. This collection was not as impressive as the similar Portuguese colony collection, but, since my Italian sphere is fairly weak, still yielded many stamps. 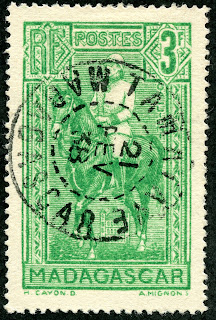 1931 Scott 176 3fr emerald
"General Joseph Simon Gallieni"
Madagascar
The French stamp world always has interesting designs, and. although I had no major increase in this area, I found 38 stamps for Madagascar, 21 stamps for Cameroun, 27 stamps for Guadeloupe, and 25 stamps for the Ivory Coast.

Many of these stamps were obtained via my virtual Big Blue want list. 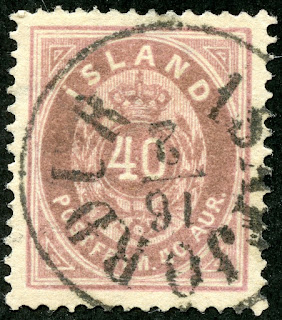 Iceland 1882 Scott 18 40a red violet
Iceland
The WW collector will want to take advantage of an unexpected buying opportunity.

A local well respected Scandinavian dealer decided this year to quit. I was sorry for this, but, since he was selling his stock @ 50% off, I took advantage to buy stamps from Iceland, Norway, Sweden, and Finland that I still needed for the virtual Big Blue album.

.I added 34 stamps for Iceland, and only lack 2 for BB completeness. 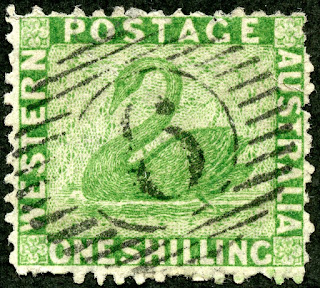 Western Australia 1865 Scott 34 1sh bright green "Swan"
Western Australia
When traveling, it sometimes pays to see if there are stamp stores, or, more likely, stamp shows in the area.

We spent the month of March of this past year enjoying the Netherlands; specifically The Hague, where my daughter is stationed for her work.

Not far from a tram stop in town was a real brick and mortar stamp store!

They did most of their business through the internet, but had hundreds of country albums and collections for sale there.

The owner welcomed me with perfect English (as do most of the Dutch), sat me down at a sorting table, and gave me a cup of coffee.

Well, how could I resist? I walked out with a nice Western Australia collection that yielded 31 stamps. 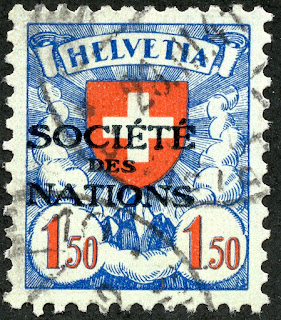 Switzerland 1935 Scott 2O33 1.50fr blue & red/blue
For the League of Nations
Switzerland
I have a decent collection of "usual" Switzerland, but do not have many of the peripheral category stamps. Sure enough, a "Central Europe" album yielded some 31 stamps. 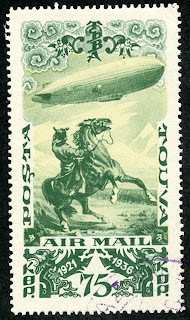 Tannu Tuva 1936 Scott C15 75k emerald green & pale yellow
"Horseman and Zeppelin"
Tannu Tuva
Who doesn't have a soft spot for Tannu Tuva, even if the stamps were blatantly intended for the stamp market?

I picked up 22 stamps from a fellow local WW collector. 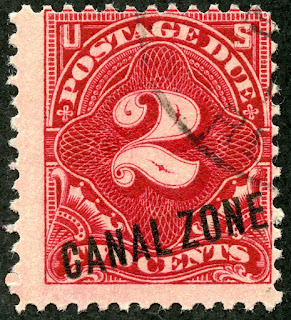 Except I noticed a cache of Canal Zone stamps.

I was the only one who bid on it.

I picked up 14 Canal Zone stamps for my collection. 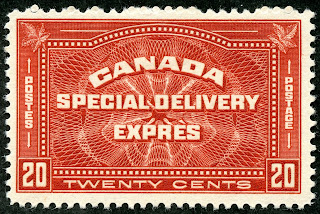 Canada 1930 Scott E4 20c henna brown
Canada
Sometimes one has the odd stamp, that for no apparent reason, is missing from the collection.

The Scott E4 20c henna brown was that stamp for me.

It was on my want list for several years.

Eventually, the only stamp from Canada missing in my virtual Big Blue was the Scott E4 20c henna brown.

Then, in September, at a local Saturday stamp bourse, a dealer specializing in the U.S., with very little Canada, had displayed on his table...yes!, the 20c henna brown! 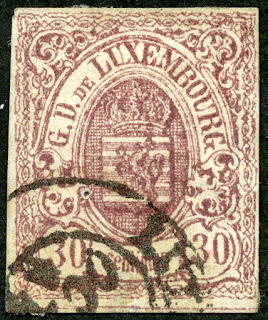 Luxembourg 1859 Scott 10 30c rose lilac
"Coat of Arms"
Luxembourg
Remember that feeder Uruguay collection I had earlier? I have a stamp buddy in town, where we attempt to trade our extra stamps based on a fixed percentage Scott CV. He was interested in my extra Uruguay, and I obtained two very nice Luxembourg stamps from him. 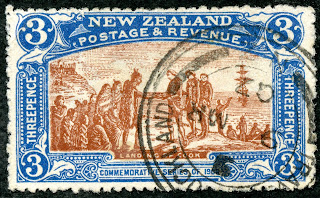 New Zealand 1906 Scott 124 3p blue & brown
"Landing of Captain Cook"
Out of the Blue
I fully expect not to do as well this coming year with my classical era collection. I think another 4000 stamp increase is unrealistic.  The "low hanging fruit" from feeder collections will not be as available, because I am no longer significantly weak in any major regional category, except perhaps for the Spanish colonies.

But part of the reason I expect not to do as "well" this year is my goal for 2017 is a bit different.

I have, left over, from pillaging the 1840-1940 era, many feeder albums/collections that have a significant amount of stamps from 1940-1967. They are perfectly wonderful specimens of " Les Semi-Modernes" era, as the Yvert catalogue like to put it, and I would like to place them into my new thick paper Minkus Global Supreme pages I've acquired from Amos Advantage/Scott this past year.