Benin is one of the French Colonial West African nations whose boundaries were determined more by French “Navigation and Commerce” interests (see the image on all of BB’s Benin selection) than by precolonial tribal territories. As the result, these countries went through many boundary and name changes during the late 19th and early 20th Centuries. The story is continued in BB’s Dahomey section. Cancels of these stamps in neighboring nations are fairly common.

Census: seven in BB spaces, four tip-ins, 23 on supplement page, some duplicates for the sake of cancels.

Jim's Observations
Historical Fact: The Kingdom of Dahomey from the 17th to the 19th century sold their war captives into slavery; otherwise the captives would have been killed in a ceremony known as the Annual Custom. 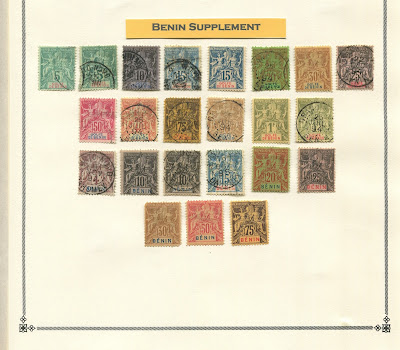