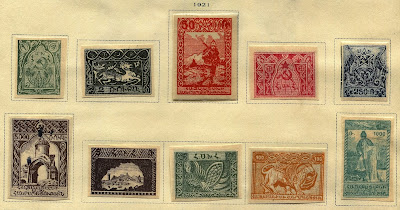 Stamps often celebrate a nation’s history or promote its current affairs. Armenia’s stamps do neither. They were issued during the time 600,000 Armenians were being killed, some say as many as 1.5 million, for political and religious reasons. Some were offered the choice of converting to Islam or death. Most chose martyrdom. Many fled to Russia and a few to the United Stated. It was the 20th century’s first mass refugee migration and genocide.

Of course, none of this is reflected in Armenia’s stamps. At a time when Russian stamps were celebrating the new triumphant motherland, Armenian designs featured Hayasdan devices, mythic monsters, ruins, and peasants. Safe subject matter, I suppose, given the times. They do seem passively concerned about preserving something of Armenia’s heritage but with, of course, a heavy Russian gloss.

Last year (2015) marked the 100th anniversary of this genocide. Sadly, no stamps commemorated the event, although in 2014 Lebanon issued a stamp showing a memorial statue to the Armenian martyrs.

Jim's Observations
For me, the most interesting issue is the 1920 set of ten stamps that were never used because they were overtaken by history. Let me explain. In 1920, the National Republic prepared a ten stamp design. The printing was done in Paris, but a large quantity was lost on their way to Armenia. Before they could be used, the National Republic collapsed as the Soviet Eleventh Army entered Yerevan. The use of these stamps was prohibited, and the stamp issues of the new Soviet Republic were used.
Big Blue has illustrations for five of these stamps, but they no longer have active Scott numbers. The set was used fiscally, but not for postage.  For myself, I'm going to be happy to fill the spaces with this issue. Stamp collecting really is more than stamp collecting; and here it gives us a little tangible piece of significant history. 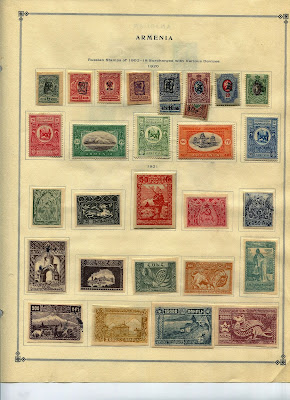 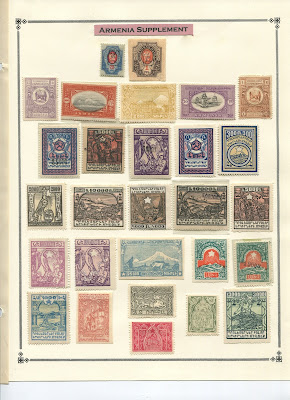