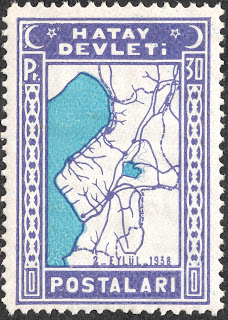 1929 Scott 13 30p light violet & aquamarine
"Map of Hatay"
Quick History
Hatay State (Turkish: Hatay Devleti), northwest of Syria, bordering on the Mediterranean Sea, was a transitional state that existed between September 7, 1938 to June 29, 1939.  The Capital was Antakya (Antioch), and the population was 234,000.

Originally part of the Ottoman Empire, the area, known as the Sanjak of Alexandretta, was occupied by France after WWI as part of the French Mandate of Syria.

Turkey, under Mustafa Kemal Ataturk, refused to accept that the Sanjak of Alexandretta was part of the Mandate, and argued that it was a "Turkish homeland for forty centuries". 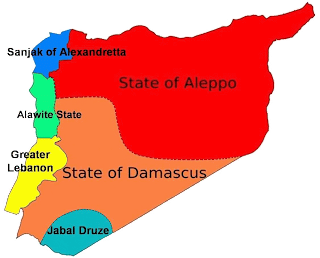 Sanjak of Alexandretta/ Hatay State (blue)
French Mandate of Syria
In 1936, communal riots between Turks and Arabs broke out, and there was impassioned articles in the rival Turkish and Syrian press. Ataturk demanded that Alexandretta become part of Turkey, who claimed  the majority of residents were Turks.

Based on the 1938 census held by the French, Turks were given 22 out of 40 seats in the Sanjak Assembly. But Turkish forces (See image)  had removed many of the Arab and Armenian inhabitants just before the census.

On September 2, 1938, the assembly proclaimed the new Hatay State. The name "Hatay" had been proposed by Ataturk himself, and the government was under Turkish control.

On September 6, the constitution was adopted by the assembly. Then  a flag was adopted (sketched by Ataturk), and Turkish was declared the state language, with French as a secondary language.  All Turkish laws were adopted, and the Turkish lira became the official currency on March 13, 1939.

On June 29, 1939, the Hatay legislature voted to dissolve the Hatay State and join Turkey.

The Hatay province was approved by Turkey, and by July 23, 1939, all remaining French Mandate authorities left Antakya.

Does this history whet your appetite for the stamps of Hatay? It does mine. ;-)

Overprinted Turkish stamps for both regular and postage due issues were produced in 1939, followed by Hatay's own stamps.

Hatay Province of Turkey after annexation
Into the Deep Blue
The 2011 Scott Classic Specialized catalogue has, for 1939, 50 major stamp descriptions for regular and postage due issues. Forty- four stamps (88%) have a CV between <$1-$4. Clearly affordable. 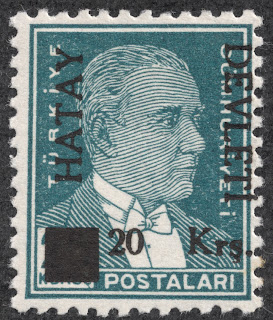 1939 Scott 11 20ku on 25ku Prussian  Blue
Stamps of Turkey, 1931-38, surcharged
The first issue for Hatay was surcharged on 1931-38 stamps of Turkey.  Appropriately enough, since he was largely responsible for the creation of the State, is a portrait of Ataturk.

The issue consisted of eleven stamps, with a CV ranging from <$1-$4+; although mostly on the low side. 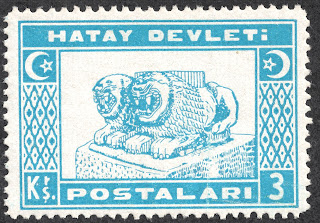 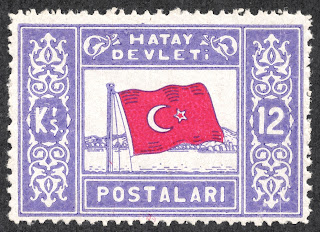 1939 Scott 20 12ku violet & carmine "Flag of Hatay"
The third design, featuring the "Flag of Hatay" (sketched and proposed by Ataturk), is found on the middle values. The issue, altogether, had thirteen stamps with a CV of <$1-$3+ for twelve stamps. 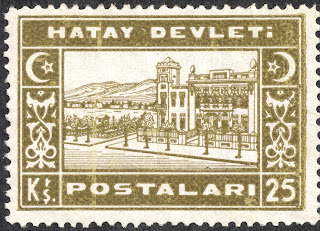 This issue, along with the regular 1939 postage due issue, were then overprinted with "Date of annexation to the Turkish Republic, June 30, 1939". These stamps (seventeen total) have a CV of <$1-$4+ for fifteen of them. I have no examples to show. ;-) 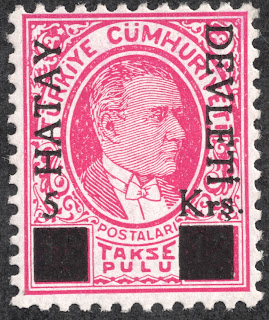 Finally, a four stamp postage due issue featuring the "Castle of Antioch" was produced. These stamps were also overprinted for the annexation date to Turkey, as mentioned previously

The "Castle of Antioch" postage due stamps (illustrated later in the post) have a CV of $1-$2..

Deep Blue
Deep Blue (Steiner), on four pages, has all the major spaces listed in Scott. My collection consists of stamps which are in Big Blue, as well as some that are not, such as those illustrated on the left here.

Deep Blue provides spacious room for my virtual "Big Blue", which is still my main focus and goal. I use the checklist for Big Blue as a want list to help populate the Deep Blue album. 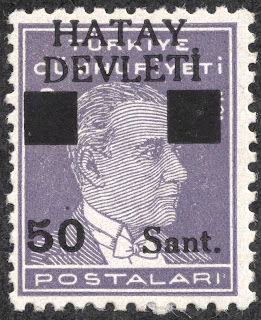 The '69 BB, on two lines of one page, has spaces for thirteen stamps. Coverage is 26%. (Other countries on the page includes Hejaz and Horta.)

Seriously, what a poor decision for recent edition BB collectors.

So, I will present a checklist for the '69, followed with a supplemental checklist of the additional stamp spaces found in the '41/'47 editions.

And just for kicks, I've removed the appropriate stamps from my virtual Big Blue housed in Deep Blue, and put them on the '47 edition BB Hatay page for a group picture.

I think this is one of the few countries in BB that I have managed (so far) to completely fill all the spaces: the goal of every BB collector. But I have a long way to go. ;-)

Readers, how many countries have you filled in Big Blue?

The '47/'41 page looks good, but are there additional (cheap) stamps that could be collected?

I did comb the CV's for Hatay that are not in the '47/'41 BB, and found, for CV <$1-$2, 18 additional stamps that could be considered by the frugal classical collector.

Comments
A) Expensive stamps (Threshold $10): None
B) (   ) around a space is for a blank space choice
C) Note I include the inventory for the '69 edition, and then a supplemental listing of stamps in the '41/'47 editions. 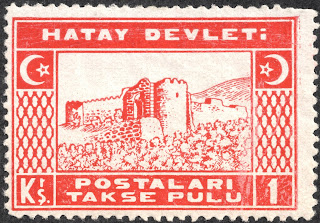 1939 postage due Scott J6 1ku red orange "Castle at Antioch"
Out of the Blue
I love it when interesting history and stamps intersect.  ;-)

Note: Maps, pics appear to be in the public domain. 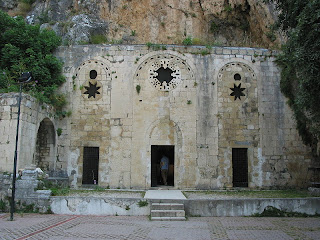 Church of St. Peter in Antakya (Antioch)
The  facade built by the Crusaders in 1100
Posted by Jim at 1:00 PM