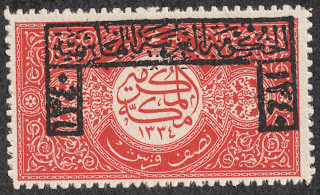 Kingdom of the Hejaz 1922 Scott L27 1/2 Piaster red
Taken from Page of Quran in Mosque of El Sultan Barquq, Cairo
Stamps of 1916 "Sherifate of Mecca" overprinted in black
Quick History
al-Hejaz (Hijaz) is part of present day western Saudi Arabia. Bordering on the Red Sea, Hejaz incorporates the Islamic holy cities of Mecca and Medina, as well as the main city of Jeddah. The Hejaz Railway, finished in 1906, had a line running between Medina and Damascus.

The Grand Sherif of Mecca declared the Sanjak of Hejaz independent of the Ottoman Empire in 1916, and he became King of Hejaz. The Capital was Mecca, and the population was approximately 1,500,000. 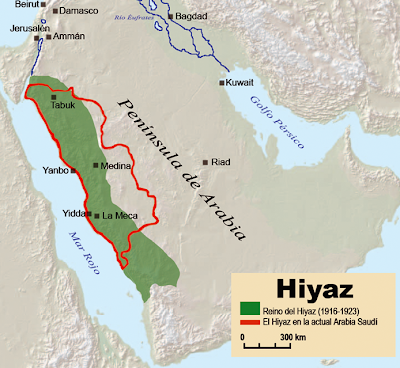 The Kingdom was annexed by Ibn Saud, the Sultan of the Nejd in 1925, after a siege of Jeddah.  Nejdi administration of Hejaz stamps were issued in 1925.

The Kingdom was renamed Saudi Arabia in 1932, and the first stamp issue was in 1934. 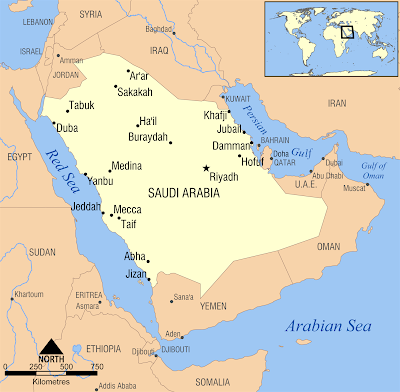 Saudi Arabia after 1932
Saudi Arabia covers most of the Arabian Peninsula. The Capital is Riyadh, and the population was approximately 3,000,000 in 1950. The official language naturally is Arabic, and the government is an Islamic absolute monarchy. The Quran is the official constitution of the country. 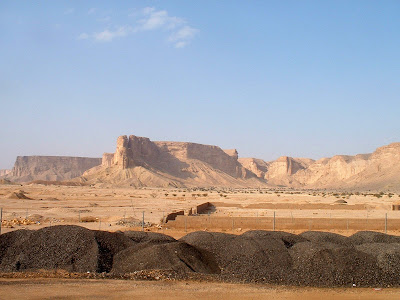 The Nejd landscape and desert near Riyadh
Into the Deep Blue
Of interest, even the 1947 Scott catalogue maintained separate Hejaz and Nejd sections, because of the dual character of the Kingdoms. The '41/'47 Big Blues also have dual entries for Hejaz and Nejd. By 1969, Big Blue had shrunk the Hejaz section from one page to two lines (more about that later), and renamed the Nejd section "Saudi Arabia".

The 2011 Scott Classic Specialized catalogue has all the iterations of the Kingdoms under "Saudi Arabia", and so this blog will cover the stamps issues beginning in 1916.

Saudi Arabian stamps are generally rather expensive. For a CV of $2 or less, I found 57 stamps (13%).
So unless one wishes to emphasize these admittedly fascinatingly stamps, a modest representative collection is all one can probably afford.

The second concern for the WW classical generalist is simply understanding enough Arabic number script to decipher the denomination. 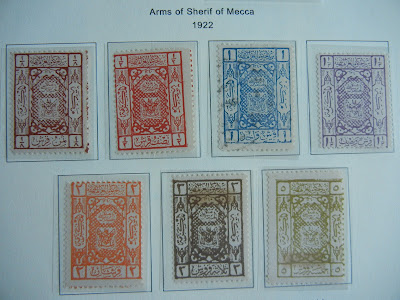 1922 "Arms of Sherif of Mecca"
Reading left to right, top to bottom, the Arabic denomination script (in the corners of the stamp) are (in Piasters):

(Western) number script is not found on stamps until 1930. 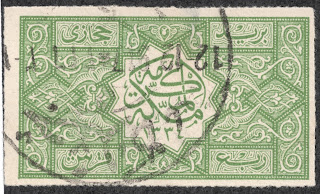 1916-17 Scott L5 1/2pi green Roulette 20
"Adapted from the Carved Door Panels of
Mosque El Salih Talay, Cairo"
The first four stamp designs for the Hejaz Sherifate of Mecca where taken from the Quran, or from Mosques.

The origin of these stamps is interesting indeed, and none other than T E Lawrence "Lawrence of Arabia" is involved.

Lawrence was a junior intelligence officer at British Military Headquarters in Cairo at the time.

After the Arab revolution, its success was being denied by much of the world's press. Lawrence thought what greater proof of the change than an issue of Hejaz postage stamps, which would be sent to all corners of the world? But not just any stamps, but some that would reflect the Arab world.

In the words of Sir Ronald Storrs, Oriental Secretary of the Arab Bureau who accompanied Lawrence to the Cairo Arab Museum: "Lawrence wandered around the Arab Museum in Cairo collecting suitable motifs in order that the design in wording, spirit and ornament, might be as far as possible representative and reminiscent of a purely Arab source of inspiration." 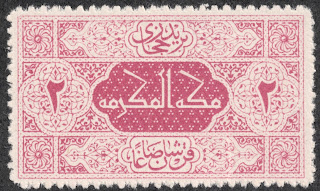 1917 Scott L13 2pi magenta Serrate Roulette 13
"Adapted from the First Page of the
Quran of Sultan Farag"
Of the thirteen stamps issued 1916-17 by the Sherifate of Mecca, nine of them are only CV $1+. Note the Arabic number "2" on either side of the central design. 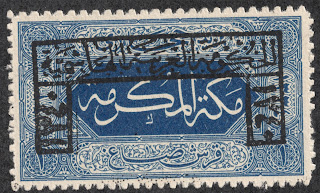 Kingdom of the Hejaz 1922 Scott L28 1pi blue
Overprint reads "Government of the Land of the Prophet 1340"
"Taken from Details of an Ancient Prayer Niche in the
Mosque of El Amri at Qus in Upper Egypt"
The first sixteen stamps issued by the Kingdom of Hejaz from 1921-22 were from the 1916-18 issues of the Sherifate of Mecca. We get to enjoy some more the T E Lawrence chosen motifs, this time with overprints. 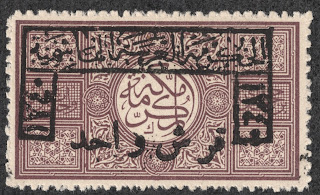 1922 Scott L31 1pi on 1pa lilac brown with additional overprint
"Adapted from Stucco Work above
Entrance to Cairo R.R. Station"
Of the sixteen stamps issued by the Kingdom of Hejaz from 1921-22, five are CV <$1-$2+. These stamp designs are as classic for the Arab Islamic world as the Greek Hermes Heads or French Ceres stamps. 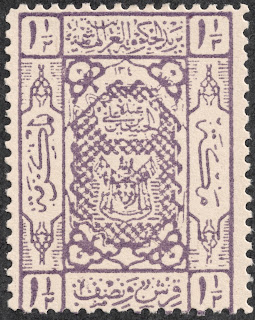 1922 Scott L36 1 1/2pi violet "Arms of the Sherif of Mecca"
1922 saw the first non overprinted issue proper for the Kingdom of Hejaz. This seven stamp issue (the entire set is pictured elsewhere on the blog) is quite inexpensive, all for <$1. 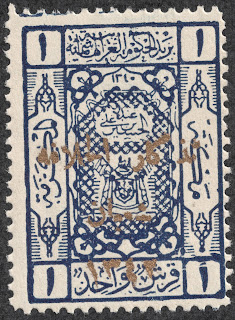 1924 Scott L44 1pi dark blue
Overprint reads "In commemoration of the
Caliphate, Shaaban, 1342"
The black overprint was dusted with gold when wet. This seven stamp overprinted set was issued on the Assumption of the Caliphate by King Hussein in March, 1924. CV for stamps in the set are $4-$7. 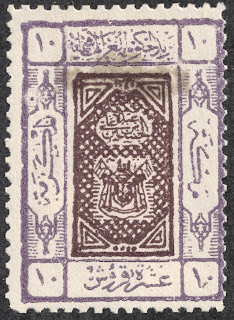 Note the unattractive hinge stain on this stamp.  ;-( 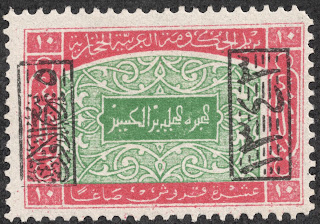 1925 Scott L168 10pi red & green
Overprint reads
"5 Rabi  al'awwal 1343" for the date of accession of King Ali
In 1925, a new ( and last) issue for the Kingdom of Hejaz was produced on the occasion of the accession of King Ali, the eldest son of Hussein. When the Saudi forces swept into Hejaz in December, 1925, King Ali and his family fled to Iraq. The issue was overprinted in black, red, and blue, and consists of twenty-five stamps total. CV is a modest $1+-$2+ for twenty stamps. 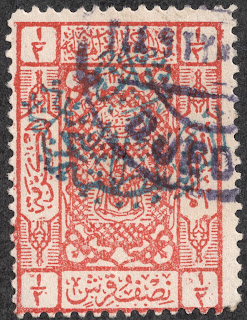 Neiji Administration of Hejaz
1925 Scott 39 1/2pi red with blue overprint
" Barid al Sultanat an Nejdia"
During 1925, some 68 overprinted issues were produced with the House of Saud overrunning Hejaz. Most are in the CV $10-$70 range. Of interest, besides overprinting the Kingdom of Hejaz postage stamps, overprinted Notarial and Railway Tax stamps of Hejaz were used, along with stamps of Turkey. 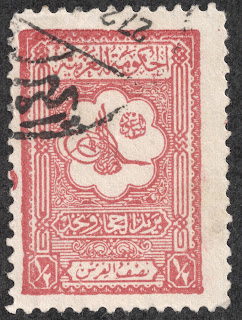 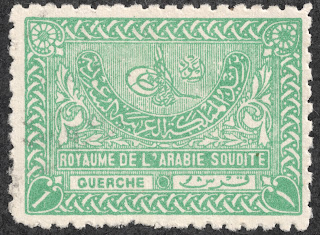 Kingdom of Saudi Arabia
1934 Scott 163 1g blue green
"Tughra of King Abdul Aziz"
Finally, we arrive into the era of the Kingdom of Saudi Arabia. And, as the issues began in 1934, there are only 26 regular stamps in the Scott classical catalogue. The design series shown above was issued between  1934-1957, and had fourteen stamps. CV is an inexpensive <$1-$2 for twelve stamps. 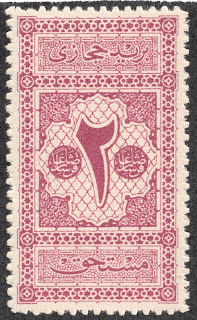 Hejaz Postage Due 1917 Scott LJ3 2pi magenta
"From an old Door at El Ashraf Barsbai in Shari el Ashrafiya, Cairo"
A relatively abundant eighty-two postage due stamps were issued by the Kingdoms. The stamp shown above was part of the first three stamp postage due issue in 1917. The CV for the stamps in this issue is $2. Thirty two of the postage dues are no more than CV $3+.

Deep Blue
Deep Blue (Steiner), on 37 pages, has all the major Scott numbers with spaces. Since many Saudi stamps are fairly expensive, the pages are overly generous for most WW classical collectors: certainly for me, ;-) 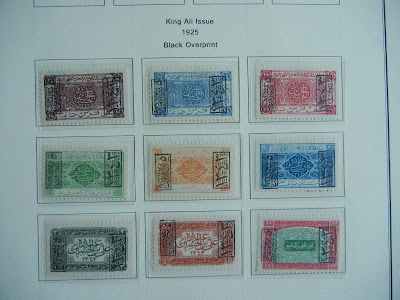 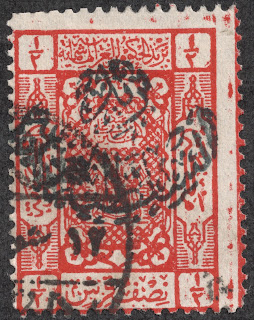 Nejdi Administration of  Hejaz
1925 Scott 39B 1/2pi red with black overprint
Big Blue
The '41/'47 Big Blue  provided almost one full page for Hejaz ( one line is devoted to Horta) and 22 spaces.
Unfortunately, the '69 edition reduced the section to two lines and 9 spaces. 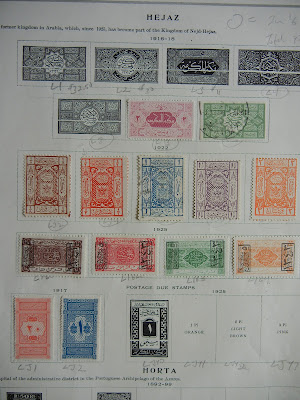 The '47 coverage for Hejaz
The '41/'47 has seven spaces for the T E Lawrence inspired stamps. The '69 has four spaces. All editions have five spaces for the 1922 "Arms of Sherif of Mecca" issue. The '69 edition removed the four stamp space for the 1925 "King Ali" issue, and six postage due spaces. 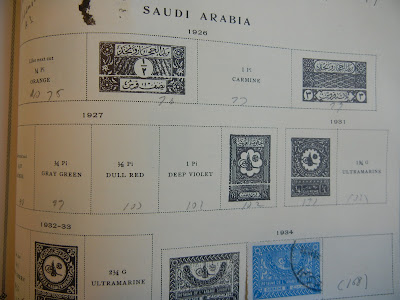 As mentioned earlier, 57 stamps are CV $2 or less, so BB could conceivably double the number of spaces without causing economic hardship for the collector.

Note: For the checklist, after the coverage of the '69 Hejaz, I supplement with the '41/'47 Hejaz coverage.

B) (  ) around a space indicates a blank space choice. 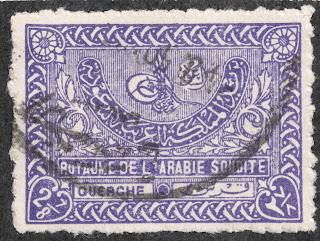 1957 Scott 165 2 7/8g violet
"Tungra of King Abdul Aziz"
Out of the Blue
I really enjoyed learning about the history, the stamps, their design, almost everything about Hejaz/Nejd/Saudi Arabia. But the expense will hold me back from acquiring much more.

Note: Maps and photo appear to be in the public domain.