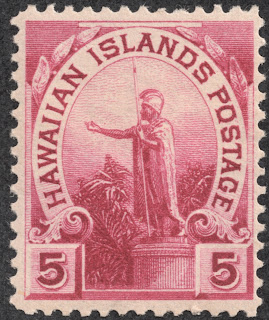 Honolulu is the Capital, and the population was 150,000 in 1899. The eight major islands are Niihau, Kauai, Oahu, Molokai, Lanai, Kahoolawe, Maui, and the island of Hawaii.

Of Polynesian settlement, Hawaii were first called the "Sandwich Islands" after the British explorer James Cook named them as such in 1778.

The inhabited islands all became under the ruler King Kamehameha in 1810, and the House of Kamehameha ruled the kingdom until 1872.

But the death of King Kamehameha V, who did not have an heir, lead to the passing of governance to the House of Kalakaua in 1874.

However, King David Kalakaua was forced to sign the "Bayonet Constitution" in 1887, so called because of the threat of violence, which eliminated much of the King's authority.

After his death in 1891, his sister, Queen Liluokalani, ascended the throne.  But a group of pro-American business leaders and residents overthrew the Kingdom in 1893, and proposed annexation to the United States. As one can imagine, this is still a sore point with many Hawaiians.

A Provisional Government was set up in 1893, and applied for annexation. But President Grover Cleveland and others were reluctant, as many held the belief that the overthrow was illegal.

The Republic of Hawaii was formed on July 4, 1894 , a not coincidental date. ;-)  After McKinley became president in 1896, annexation was again proposed. In 1898, the islands became the Territory of Hawaii. 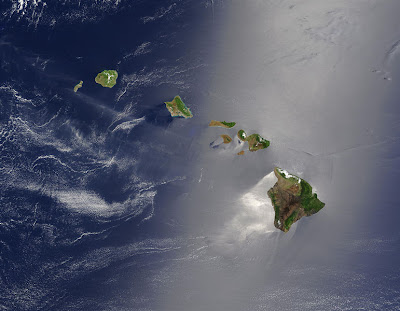 Satellite view of Hawaii archipellago
Into the Deep Blue
The 2011 Scott Classic Specialized catalogue has, for 1851-1899, 91 major descriptions for regular and official stamps.


Hawaii has one of the all time great rarities in philately with the 1851-52 Scott 1-4 "Missionaries", so called as they were used by the American protestant missionary writers for their letters.

In fact, all of the earlier twenty-eight Hawaiian stamps (1851-1863) are expensive (hundreds) to very expensive (thousands). You and I will have to content ourselves with catalogue pictures. ;-)  But reviewing the remaining 1869-1899 issues ( 63 stamps), 39 are CV $20 or less. Therefore a "representative" collection may be put together for a 'mid-level" outlay.

Many of the interesting "mid-level" priced Hawaiian stamps feature portraits of the rulers and family during the days of the Hawaiian kingdom. Let's take a closer look, and, as a benefit,  become more familiar with the Hawaiian monarchy. 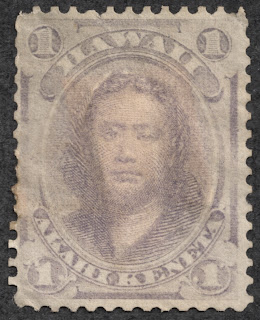 1886 Scott 30 1c purple
Princess Victoria Kamamalu
The 1864-86 issue had five stamps, all with portraits of royalty. The 1c purple, here rather faded, shows Victoria Kamamalu, granddaughter of King Kamehameha, and sister of the King's Kamehameha IV and V. She was the "Kuhina Nui of the Hawaiian Islands" from 1855-63, a type of Prime Minister/ Regent position to the Kings. She died at a young age of 27 without marriage or children, and the House of Kamehameha still had no obvious heirs. 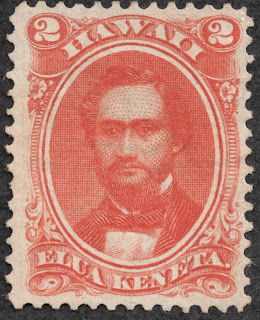 1864-66 Scott 31 2c rose vermilion
"King Kamehameha IV"
This stamp has a portrait of Kamehameha IV, Victoria's brother, and King from 1855-63. In 1862, he translated the Book of Common Prayer into the native Hawaiian language. The King and Queen Emma built a hospital, The Queen's Medical Center, to help combat leprosy and influenza. He also died young, at age 29, without any living children. 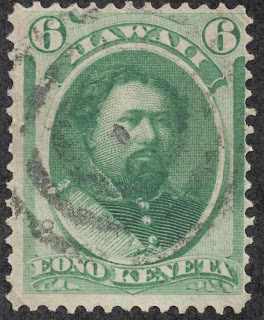 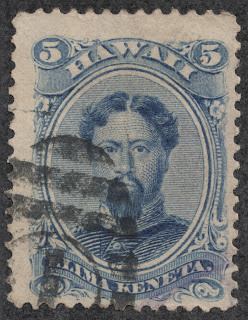 1882 Scott 39 5c ultramarine
"Kamehameha V"
King Kamehameha V was the last in the line of the House of Kamehameha, as he too died without children.

This particular stamp design was first issued in 1866 in a blue color. It can be distinguished from the later 1882 issue (shown above), as the 1866 stamp has traces of the rectangular frame lines surrounding the design.

For a review of this, as well as all the Hawaiian stamps, check out this GREAT site. 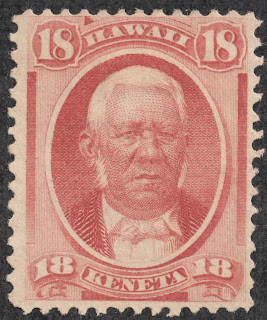 1871 Scott 34 18c dull rose
"Mataio Kekuanaoa"
Mataio Kekuanaoa was the father of King Kamehameha IV and V, and served as  Kuhina Nui from 1863-64. He is somewhat underrated in philatelic history literature, "often referred to only as the King's chamberlain, responsible for emptying the spittoon". 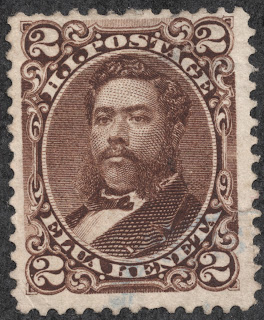 2c1875 Scott 35 2c brown
"King David Kalakaua"
When King Kamehameha V died without heirs in 1872, a popular vote was held, and William Lunalilo, a cousin, was elected.  But Lunalilo died in 1874, and Kalahaua was elected to replace him. Kalahaua  promised to put native Hawaiians back into the Kingdom's government, which was dominated by non natives.

Known as "The Merrie Monarch", he had a fondness for the joyful part of life. He revived the hula dance, which had been banned previously.

But he was to be the last reigning King.

The "Missionary Party" wanted to reform the monarchy after the constitutional monarchy model of the United Kingdom, where the monarch had very little real power over the government.

And by 1877,  members of the Hawaiian League, who favored annexation, had the King sign, at gun point,  the apply named "Bayonet Constitution". This deprived the King of much of his former monarchic powers, and disenfranchised many ethnic Hawaiians from voting rights. 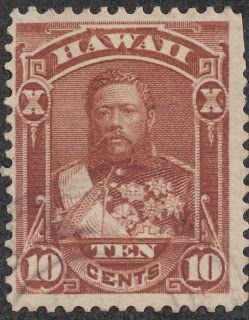 1884 Scott 44 10c red brown
"King David Kalakaua"
The King's health deteriorated, and with the advice of his physician, he traveled to San Francisco. He died in 1891 at the Palace Hotel there. 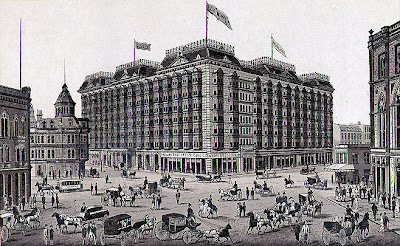 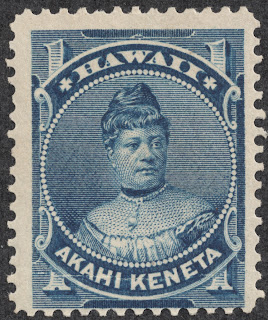 1882 Scott 37 1c blue "Princess Likelike"
Princess Likelike was the sister of King David Kalakaua and Queen Liliuokalani. Her image is part of a five stamp issue of 1882. She married a Scottish Victorian gentleman twice her age, who naturally wished to rule the household as "lord of his castle". She, being of Hawaiian nobility, was used to ruling others. The marriage did not go well. 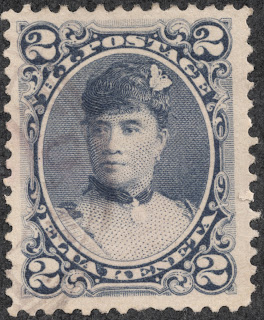 In 1893,  a group of Americans and Europeans formed a Committee of Safety, seeking to overthrow the Hawaiian Kingdom. As the coup d'état was occurring, the Committee expressed concern about the safety of American citizens. 162 Marines came ashore from the USS Boston. The Queen was deposed, yielding to "the superior military forces of the United States". Subsequently, the Queen was arrested in 1895, after a failed counter-revolution, and sentenced to five years imprisonment by a military tribunal. She then agreed to abdicate her throne in return for commutation of death sentences of her supporters, and she was released. 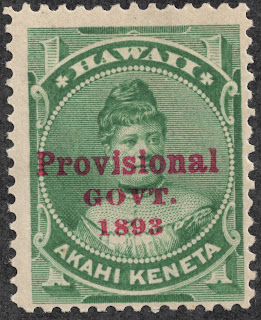 1893 Scott 55 1c green
Overprinted  in red "Provisional Govt. 1893"
The new Provisional Government overprinted the Kingdom stamps in 1893 as shown. Thirteen stamps were overprinted in red. They didn't particularly care to use the old monarchy stamps, but what could they do? 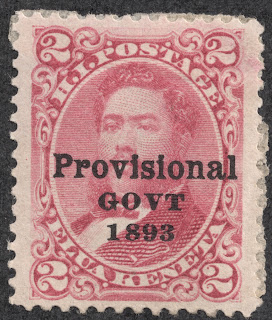 The Provisional Government expected quick annexation by the United States, but opinions had changed. Grover Cleveland delayed annexation, and demanded the restoration of the Queen. In fact, there were rumors that there might be a US intervention to bring back the Kingdom. 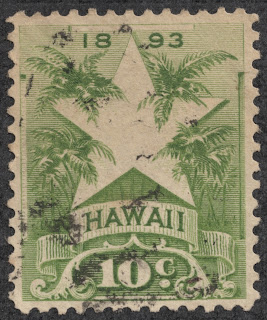 1894 Scott 77 10c yellow green "Stars and Palms"
Quickly, a Constitutional Convention was called, and on July 4, 1894, the Republic of Hawaii was declared.

A six stamp set was issued in 1894, including this very American themed "Stars and Palms".

As it turned out, the Republic had to wait four years before the US was again interested in annexation. 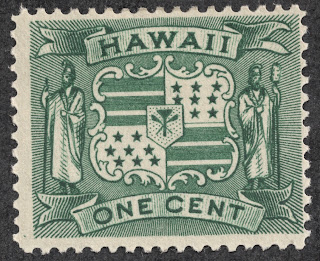 1899 Scott 80 1c "Coat of Arms"
In 1898, the US annexed the Territory of Hawaii. A three stamp set was released in celebration (relief?) of this milestone. The designs, although in different colors, were similar to the preceding issue.

On June 13, 1900 all Hawaiian stamps became invalid for postage, and stamps of the United States were in the Hawaiian post offices on June 14, 1900.

Deep Blue
Deep Blue (Steiner) has all the major Scott numbers having spaces on six pages. Included are four spaces for the "Missionaries".  ;-) 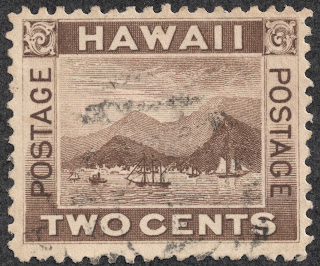 1894 Scott 75 2c brown "View of Honolulu"
Big Blue
Big Blue '69, on one page, has 33 spaces for the stamp issues of 1864-1899. Ignoring the earlier very expensive stamps (28), Scott has 63 major descriptions left for the time frame above. Coverage, therefore, is 52%, a healthy percentage for these mid-expensive stamps. 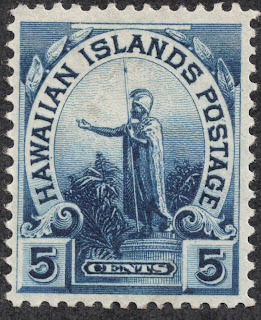 1899 Scott 5c blue "Statue of Kamehameha"
Out of the Blue
Stamps bring History to Life.

Note; Map satellite photo, and Palace Hotel photo, and pic of Dawson cover appear to be in the public domain.