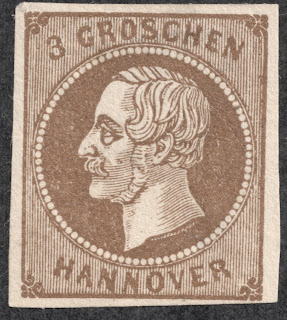 "1861 Scott 23 3g brown "King George V"
Reprint
Quick History
Through 1837, Hanover (or Hannover) was the family seat of the Hanoverian Kings of Great Britain. The last British monarch who ruled in Hanover was William IV (1830-37). But on his death, he had no legitimate children. Victoria, his niece, than ruled in the United Kingdom, while his brother, Ernest Augustus I, succeeded for the Kingdom of Hanover. This occurred, as according to Salic Law, Hanover could only be inherited by males. So, although Victoria herself was a descendant of the House of Hanover, she could not rule there. 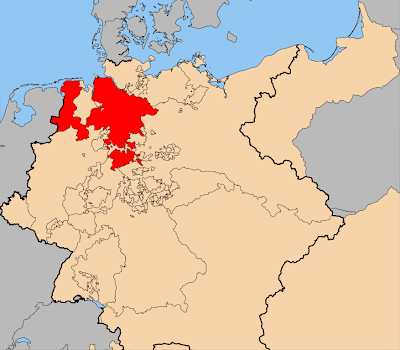 Kingdom of Hanover, 1815-1866
The population of Hanover was 3,200,000. Stamps were issued for Hanover from 1850-1864. The stamps of Prussia superseded the stamps of Hanover on October 1, 1866. Why? Because Hanover was on the losing end of the Austro-Prussian War of 1866. The Kingdom was dissolved, was annexed by Prussia, and became the Province of Hanover. 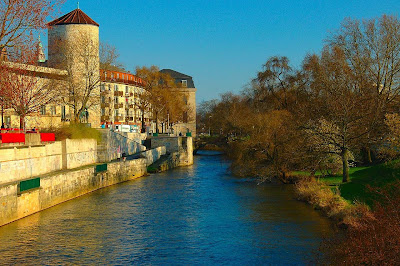 The Leine River at Hanover City
Into the Deep Blue
The 2011 Scott Classic specialized catalogue has, from 1850-1864, 25 major descriptive numbers for Hanover. Eight stamps are CV $2+-$25+. A choice group can be collected without a large outlay. 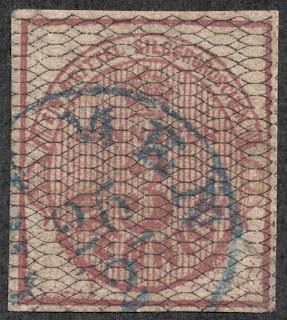 "1856-57 Scott 9 3pf rose & black"
Large network
A five stamp issue was produced in 1856-57 with CV ranging from $5+-$200+. Scott states "The reprints have white gum, and the network does not cover the outer margin" I'm afraid this is probably a reprint. Actually, finding an original Hanover in my collection does not look promising. 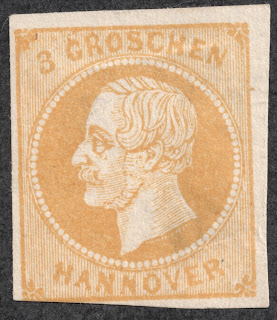 Scott states "reprints of...3g yellow have white or pinkish gum, while originals have rose or orange gum". This is a reprint until proven otherwise. 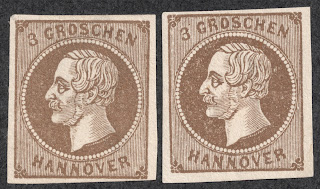 "1861 Scott 23 3g brown "King George V"
Two copies: Reprint
The above 3g brown is a CV $20+ stamp, and I found two in my casual collection of Hanover? Doesn't appear to have rose or orange gum as the originals- or any gum, for that matter. 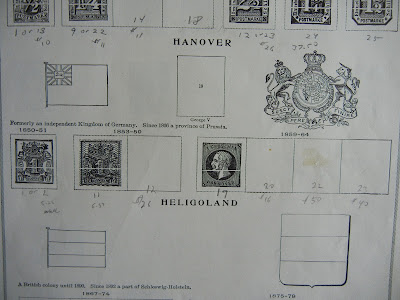 Big Blue "47 and Hanover
Big Blue
Hanover was part of the 1969 BB housecleaning, so Hanover is a missing "H" country. 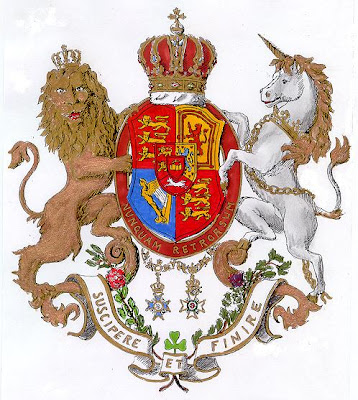 Coat of Arms Hanover 1837
Out of the Blue
I wonder what an original Hanover stamp looks like? ;-)

Note: Map, Coat of Arms, and Hanover pic appear to be in the public domain.