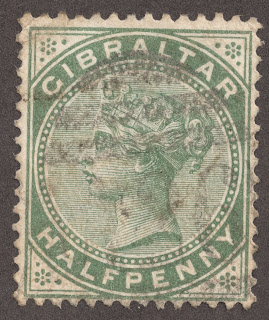 1898 Scott 9 1/2p gray green "Victoria"
First dedicated issue for Gibraltar
Quick History
The British have claimed the Rock of Gibraltar (1,400 feet) on the southern coast of Spain, about 2 square miles in area, since 1713. The promontory juts out at the entrance to the Mediterranean Sea. A very strategic location, this has been a key location for the British Royal Navy for many years. The capital is Gibraltar, and the population was about 20,000 in 1940. 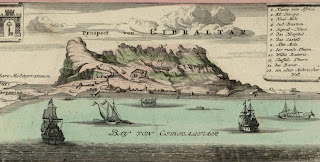 In the 1950's, Franco and Spain renewed their claim on Gibraltar, but Gibraltarians voted to reject Spanish governance.  In 1981, residents of Gibraltar were granted full U.K. citizenship, and today Gibraltar remains a British overseas territory. 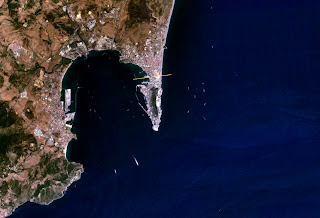 Satellite Map of Gibraltar
There have been stamps of Great Britain used in Gibraltar since 1857. Some 75 stamps are recognized in the Scott catalogue ( a barred "G" or oval "A26" postmark), and they are valued for the specialist from $20-many hundreds. They are outside the realm of the general WW classic era collector, so I will say no more about them here.

The first issue (seven stamps) was produced in 1886, and actually were Bermuda stamps that were overprinted "Gibraltar". Three of them are valued @ <$10.
Since I don't have any, no more will be said. ;-) 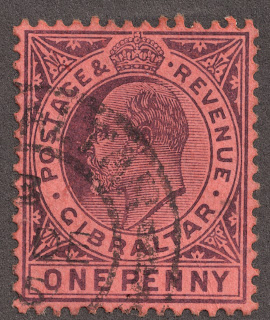 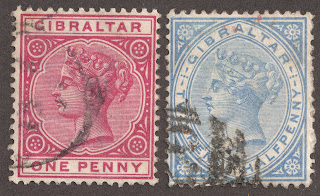 1898 Scott 11 1p carmine rose "Victoria"
1898 Scott 14 2 1/2p bright ultramarine "Victoria"
Part of first dedicated issues of Gibraltar
The first issue intended for Gibraltar was a thirteen stamps series with the classic "Victoria" design. Six stamps can be found for <$1-$7+.  Illustrated above are two of the different frame designs, with a third heading this blog. Nice. 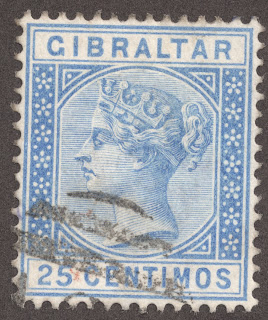 1889-95 Scott 32  25c ultramarine "Victoria"
A change in denomination to Centimos and Pesetas
In 1889, a change in denomination was introduced- influenced by Spain?- to Centimos and Pesetas. I was unable, in the short time I spent on research, to find why this occurred. Perhaps a reader knows? At any rate, it was short lived, as the next series (1903) was again in Pence/Shilling.

The twelve stamps in the issue have six stamps with a CV ranging from <$1-$6. It has the same design as the preceding issue.

All of the Queen Victoria's for Gibraltar have wmk 2- the Crown and CA, No need to worry about different watermarks.

That certainly is not true for the forthcoming issues, however, so it might be good to "refresh" the memory on the colonial watermarks. 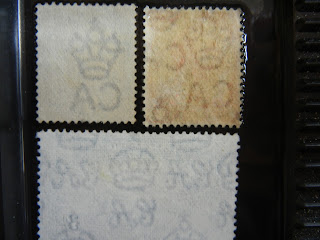 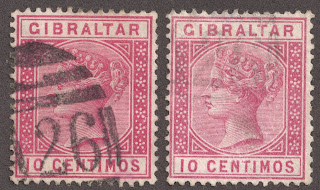 Two examples, with different shades, of 1889-95 Scott 30 10c "Victoria"
The "A26" cancellation was for Gibraltar
I never quite know what to do with "shades". Sometimes the catalogue, either Scott or Stanley Gibbons, will have a matching shade description. Then I will happily assign the minor number to the shade, and try to add it to the page with the same major number if possible. But more often, I am left in limbo. Is it a changeling, or a "real" shade? I hate becoming a "hoarder", keeping every very minor variation. So I try to resist the urge. What do you do with your minor variations? 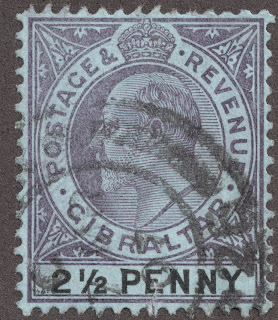 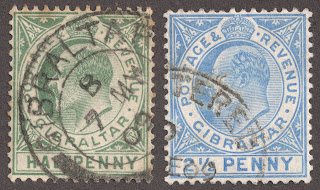 1904-12 Scott 49A 1/2p dull green & bright green "Edward VII"
1907 Scott 55 2 1/2p ultramarine -wmk 3
The seventeen stamp 1904-12 series -wmk 3 - was also issued as "chalky paper" varieties with their own (bolded) Scott numbers. (So look for the "chalky" to add a shiny pate to the head of the "Baldy". ;-) ) This adds six more stamp catalogue numbers. Altogether 23 stamp types- so it is a little complcated. And, one needs to differentiate this present series (wmk 3) from the preceding 1903 wmk 2 issues. The denomination varieties where the stamp exists in both ordinary and chalky paper are:
1/2p dull green & bright green
1p violet/red
2p green & carmine rose
6p violet & purple
1sh black & carmine rose
2sh green & ultramarine

As said, a bit complicated. 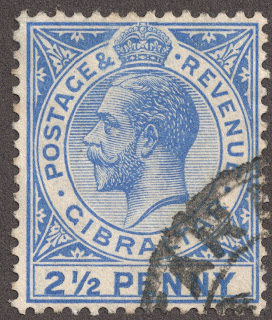 1912 Sott 69 2 1/2p ultramarine "George V"
Part of a 10 stamps series: wmk 3
Notice the frame is the same as the preceding "Baldies" issues?
King George V was introduced on Gibraltar stamps in 1912 with a ten stamp series. To give the impression to their British subjects that Monarchs may change, but everything else is the same, the stamp frame is identical in design to the "Baldies". (In fact, the next issue will push the sameness to 1932.)

Five of the issue ranges in CV from <$1-$4+. There are chalky stamps ( 6p and higher denominations), but no duplication's with the ordinary paper variety. 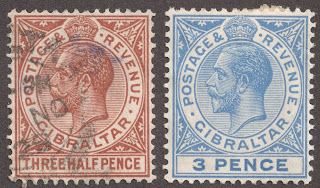 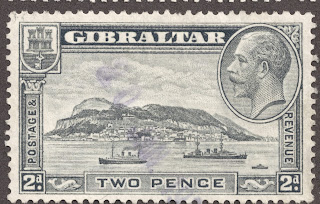 1932 Scott 98 2p gray "Rock of Gibraltar"
Four stamp set
Breaking out of the Monarch stamp mold, the 1931-33 set was a pictorial with the above illustration. I especially like the ships in front of the Rock. The CV ranges from $2-$4. 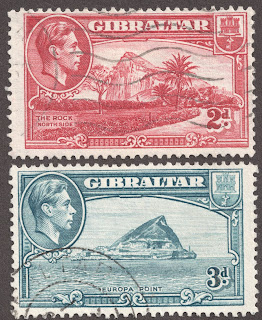 1938-49 George VI  2p carmine rose "The Rock North Side"
3p blue "Europa Point": part of a 14 stamp series
The 1938-49 George VI series continues the pictorials with seven scenes in a fourteen stamp production. Ten of the stamps range from <$1-$4. 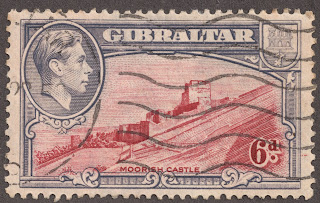 Most of this series stamps were produced after 1940 (Nine of them), so clearly the "1940" usual cutoff for Big Blue would not work well here. Of interest, BB  does include 5 stamps issued after 1940 as choices!  Deep Blue classic pages, of course, goes to 1952 for the British Commonwealth.

I also reviewed the SG 1840-1970 catalogue for Gibraltar, and this issue had a number of reported flaws. What is amusing, though, is how SG reports the flaw. There is an "Ape on Rock" or "Bird on Memorial", rather than "smudge" or "fly-speck".  I give credit to SG for imagination! 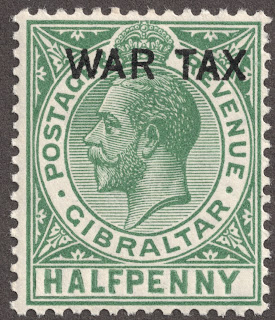 1918 Scott MR1 "George V"
War Tax stamp
Finally, we end the Gibraltar close-up with the war tax stamp. Many of the British Colonies, in order to raise funds for WWI, had a war tax stamp which needed to be added to a letter along with the regular postage.

By the way, the United States had a war tax also, it was just "hidden". The first class letter rate was raised from 2c to 3c to pay the tax.

Deep Blue
Deep Blue (Steiner) has eleven pages with stamp entries from 1866-1950, and I have stamps on nine of the pages.. Naturally, Deep Blue has a space for the different watermark stamps of the Edward VII and George V era. And, thankfully, Deep Blue has all the spaces for the George VI 1938-49 pictorials.

I noticed the descriptions for Gibraltar in Deep Blue follow the Scott catalogue. However, other colonies (such as Dominica) use the SG descriptive vocabulary.

What Deep Blue doesn't provide spaces for are the duplicate "chalky paper" varieties of the Edward VII 1904-12 set (six stamps). Scott gives these bolded minor numbers, and they are listed along with the major numbers, and given the same prominence and space.

I was ready to give Deep Blue a "tongue-lashing" about this, but noticed that SG only gives these variations minor numbers. So actually Scott might be a little too generous with the bolded numbers; perhaps they only deserve italic minor numbers. 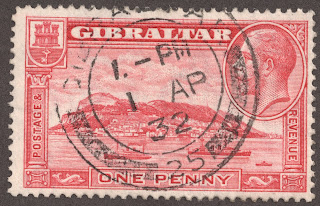 Naturally, not very generous coverage, but BB is true to it's philosophy by not offering spaces for different watermarks, which is characteristic of the "Baldy" and "George V" issues.

Some comments...
A) BB, for the 1886-98 "Pence" Victorias, only offers one space for the 1/2p and 1p denominations, although there are two different color choices for these spaces, and the most expensive is $5. Also no room is offered for the Scott 13 2p ($2).

C) Naturally all the 1903-11 "Baldies" issues are only given one space for the two watermarks.
But the 1/2p comes in three major numbers, one bolded minor number,and three colors, and is given just one space. The CV range from $2-$11.

Comments
A) Expensive stamps ($10 threshold): none
B) *67a 1p scarlet "George V" is now a minor number, so 67 carmine is now included. The 77 1p rose red is excluded (color).
C) Most of the discussion about the BB included stamps is elsewhere in this blog. 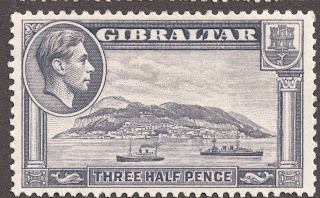 1943 Scott 109A 1 1/2p gray violet "Rock of Gibraltar"
Out of the Blue
After all the French and German colonies, and the German area proper blogs, it is nice to get back to a British colony. One knows what to expect, but there are surprises too. Here the Pence/Centimos Victorias and the long run of "Baldies" adds spice to the Gibraltar holdings for the classical era collector.