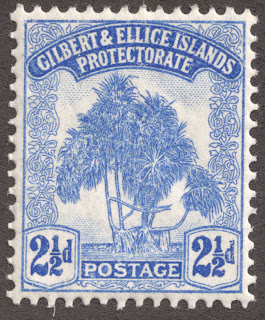 1911 Scott 11 2 1/2p ultramarine "Pandanus"
Quick History
The Micronesian Gilbert Islands and the Polynesian Ellice Islands, located in the Pacific Ocean between Hawaii and Australia, began as a protectorate in 1892, and then a British colony from 1916 until 1976. Thereafter the Gilbert Islands became the majority of the island nation of Kiribati (pronounced "Kirr-i-bas") in 1979, while the Ellice Islands were renamed Tuvalu in 1978. Both are currently members of the Commonwealth of Nations. 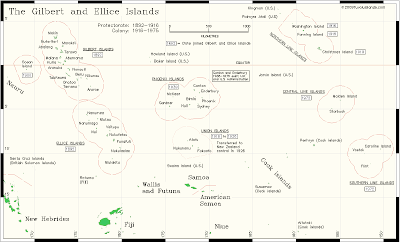 Gilbert & Ellice Islands
Copyright: brcstamps.com
The Gilbert group has Butariti, Tarawa, and Tamana as the more important islands. Besides the Ellice Islands, the Phoenix Islands, the Line Islands (Fanning, Washington, and Christmas (aka Kiritimati, not the Indian Ocean Christmas Island that puts out stamps)), and Ocean Island are part of the colony. By the way, notice the U.S. Howland Island? That is the last place Amelia Earhart's radio transmission was heard*. 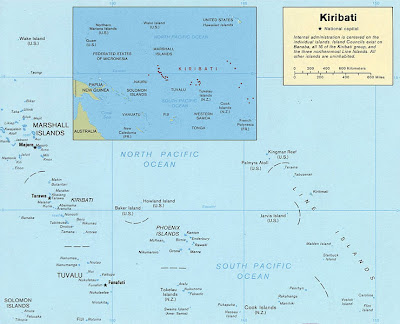 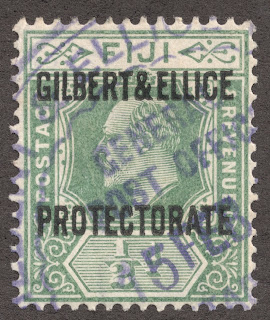 A closer look at the stamps and issues
12 Pence = 1 Shilling
20 Shillings = 1 Pound
The "Funafuti Provisionals" of 1916 caused quite an uproar in the philatelic press at the time. These values, surcharged by the Post Office in Funafuti because of a shortage of stamps, have never been listed in Scott.  SG withdrew their listing in 1923. For a fascinating read about this episode, click on:
http://brcstamps.com/catalog/countries/Gilbert_and_Ellice_Islands/geic_funafuti_provisionals_1.html 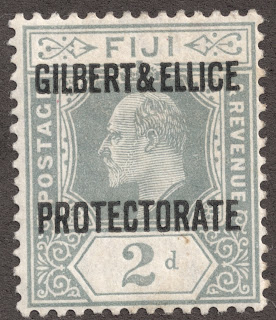 1911 Scott 3 2p gray "Gilbert & Ellice Protectorate"
Stamps of Fiji overprinted
A regular ship service for picking up mail began January 1, 1911, and hence seven Fiji "King Edward VII" stamps were overprinted as illustrated for the first stamp issue. The least expensive are two mint stamps for $7+, with the rest $15-$45 CV. Perhaps the reason the used CV is high for these stamps ($10+-$90), is because they were only out a couple of months before the next  issue was produced. 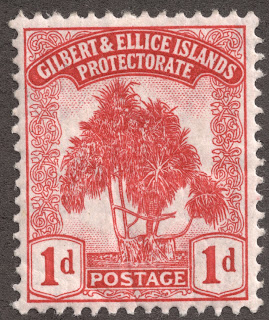 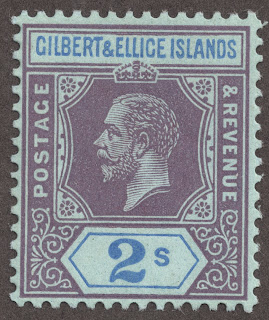 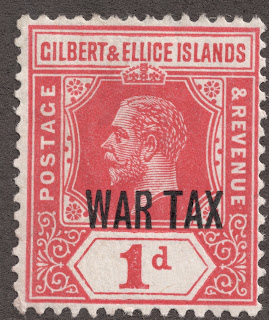 I will also revisit the Die I/Die II variations with the "Gold Coast" blog; next to be published. 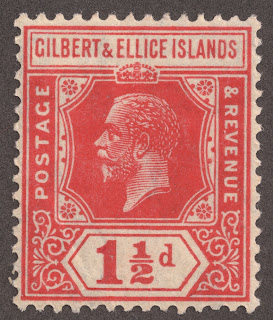 Note the crown is not dropped down as far into the solid color vignette area as in Die I. For watermarking illustrations, see the prior Gibraltar blog . 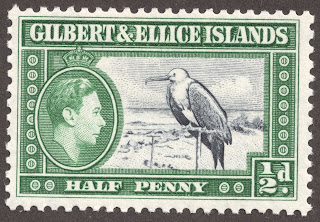 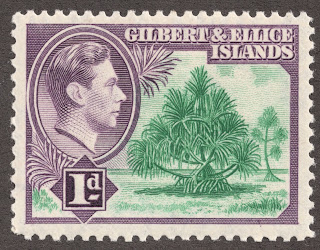 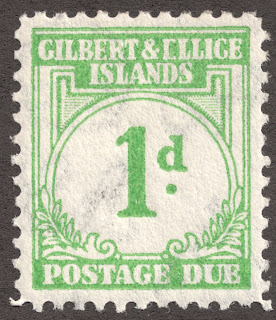 1940 Postage Due Scott J1 1p emerald
Note the printing error in "Ellice"?
In 1940, a eight stamp Postage Due set was issued with various colors for different denominations. The CV is rather high; $5-$30+.

Of interest, this particular 1p emerald does not show the full "E" in "Ellice". Stanley Gibbons makes no mention of a consistent error, so this must be an idiosyncratic plate printing flaw?

Deep Blue
Deep Blue (Steiner) has five pages for the Gilbert & Ellice Islands, and I have stamps on four pages. The layout follows Scott.  But, of interest, Steiner includes two additional spaces for perforation varieties (minor numbers) for the 1939 issue George VI pictorials. 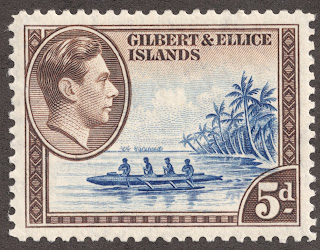 There are no stamps included with CV over $10.

The George V stamp spaces, per usual, combines the wmk3/wmk4 and Die I/Die II varieties; although in this case there is not a lot of overlap, except for the 2p gray. The 1p "scarlet" George V listed by BB, is now a minor number (15a). The major number, Scott 15, is "carmine". I include both as choices as a nod to pragmatism.

The Silver Jubilee issue (CV $1+-$5) is not included in BB's space choice.

Comments
A) Expensive stamps ($10 threshold): none
B) ( ) around a number indicates a blank space choice
C) Additional comments above in blog 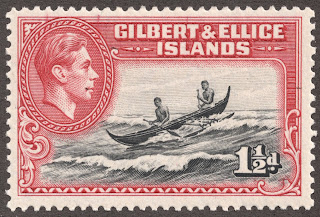 Note: The Gilbert & Ellice Islands Map is copyright, but is used with the kind permission of Brian of brcstamps.com.  The Kiribati Map appears to be in the public domain.

*Amelia Earhart search scheduled for this summer (2012) is focusing on Kiribati's Phoenix Island chain and Gardner Island (Now called Nikumaroro), where the landing gear of her plane on a reef may have been spotted from an old 1937 photograph.