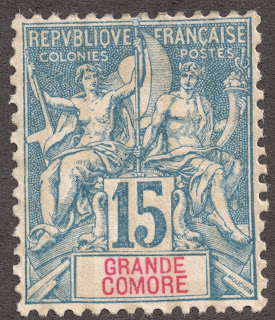 1897-1907  Scott 7 15c blue "Navigation & Commerce"
Quick History
Grand Comoro (Grande Comore-now Ngazidja) is an island off the coast of Africa in the Mozambique Channel between Madagascar and Mozambique. It is the largest (443 sq mi) of the Comoro islands: others being Anjouan and Mayotte, also French colonies.

Grand Comoro and the other Comoro Islands


In 1886, Sultan Said Ali united the sultanates of Grand Comoro, the same year France established a protectorate. In 1893 the Sultan was exiled to Réunion.

The familiar French colony "Navigation and Commerce" stamps for "Grande Comore" were issued in 1897, and continued until 1907.

France took full control of the island in 1908, and the sultanates were abolished.

A surcharged issue was produced over Grand Comoro stamps in 1912, but accepted throughout the newly expanded colony until the stamp issue was exhausted.

That is because in 1912 the Comoro archipelago was administratively united with the French Madagascar colony, and thereafter the stamps of Madagascar were used.

Independence was declared in 1975 as the Nation of Comoros (Grand Comore, Anjouan, and Mohéli were members).

In 1997, the union fell apart, and Anjouan and Mohéli seceded.

But a new constitution was developed, and the parts were re-united in 2002. 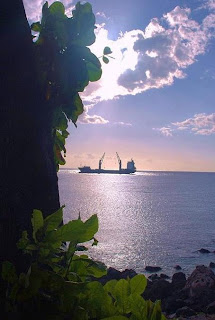 Harbor Bay in Grand Comoro
Into the Deep Blue
The 2011 Scott Classic Specialized catalogue has 29 major stamp descriptions for the years 1897-1912.
Twelve stamps are CV $1+-$4+. "Affordability" index is 41%. 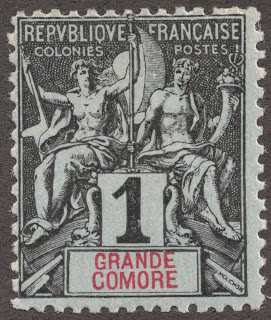 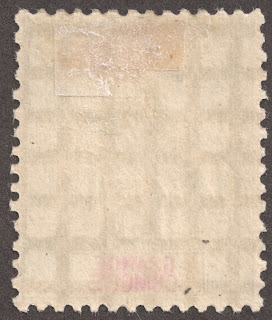 Why would the 15c blue have this feature?  Readers?

The second (and final) stamp issue are the issues of 1897-1907 surcharged with large numbers in black or carmine in 1912. I don't have an example here, but this surcharged design was issued by many other French colonies, and can be seen in the Gabon and  French Guinea blogs.

This surcharged issue was available for use throughout the Comoro archipelago and Madagascar. In fact, Madagascar then assumed stamp production duties.

Deep Blue
The Deep Blue (Steiner) album has all the major numbers included in spaces on one page. I've complained about this before, but I would have preferred spaces also for the 1912 bolded minor number stamps as well. 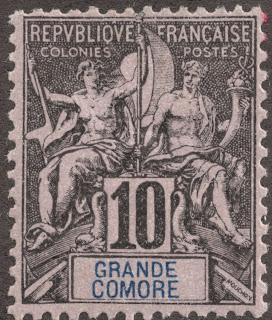 Big Blue has a great selection here, as all ten surcharges are given a space for the 1912 issue.  And the rapidly more expensive 1897-1907 "Navigation and commerce" issue is given a generous seven spaces.

If BB did this for every country, there would be no need to look elsewhere by the "frugal" classic era collector. ;-)

BTW, the Grand Comoro entry is found in the '69 BB just before German East Africa.

B) (  ) around a number is a blank space suggested choice. The most expensive stamps for Grand Comoro fall into this category. 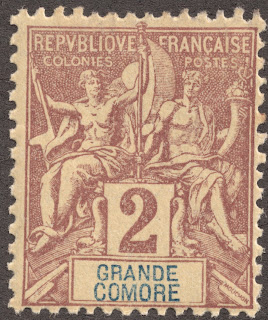 1897-1917 Scott 2 2c brown/buff
Out of the Blue
What I like particularly is knowing nothing about a country in Big Blue or Deep Blue, and then finding out something. More often, like Grand Comoro, there are then linkages with other countries (Anjouan) that have been reviewed.

Note: Map and Photo appear to be in the public domain.