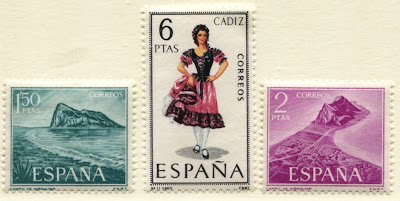 Gibraltar from the Spanish Province of Cadiz
Bud's Big Blue
Bud's Observations
Currency kerfuffles bedeviled 19th century Gibraltar.  Actually, onward from 1704 when Anglo-Dutch forces captured Gibraltar from Spain, the coins of Spain and Britain circulated concurrently with Gibraltar’s. Exchange rate chaos ensued. In 1872, Spanish currency became the exclusive legal tender. Then, as a result of the Spanish-American War (1898), the Spanish peseta collapsed and the British pound replaced it.

Meanwhile in 1886, Gibraltar’s first postage stamps, the Bermuda overprinted varieties as well as those inscribed Gibraltar, were issued in British (not Spanish) currency denominations. Three years later, stamps in Spanish currency were release, first with overprints on the 1886 stamps and then with Spanish currency inscribed. Spanish money was, after all, legal tender at the time. The British and Spanish denominated stamps apparently coexisted until 1898.

BB’s top row for Gibraltar sorts out these developments as best as it can. The first three spaces, headed “1886-98”, can be used for the early stamps or the later reissues. Then follows five spaces for the 1889 stamps with Spanish coinage inscribed. The overprints get no spaces, but a few examples appear on the supplement page.

The larger complicating issue, of course, is that Spain has never gotten over having a British colonial thorn in its Mediterranean butt. Throughout the 20th century Spain made several attempts to regain some level of sovereignty, but Gibraltar had to accept. The courtship always failed, spectacularly so. Gibraltareños would have none of it. Even a huffy border closing didn’t work. The two 1969 stamps (above) showing Gibraltar from the Spanish Province of Cadiz seem, in light of these rebuffs, sadly forlorn.

Jim's Observations
The British have claimed the Rock of Gibraltar (1,400 feet) on the southern coast of Spain, about 2 square miles in area, since 1713. The promontory juts out at the entrance to the Mediterranean Sea. A very strategic location, this has been a key location for the British Royal Navy for many years.

As Bud says, Spain has not been happy with this reality, a legacy from when the British Empire ruled the seas. 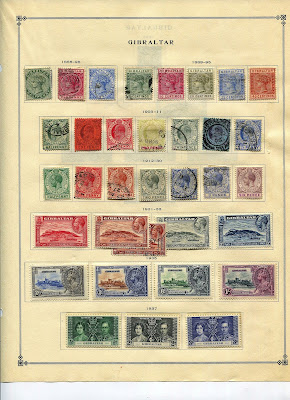 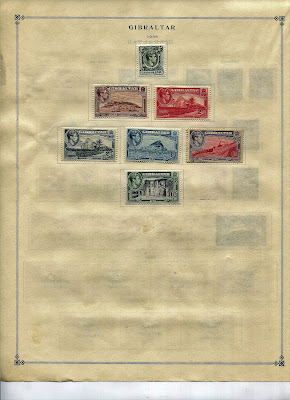 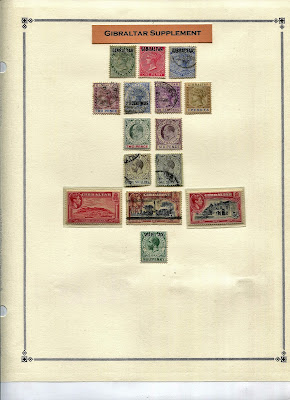