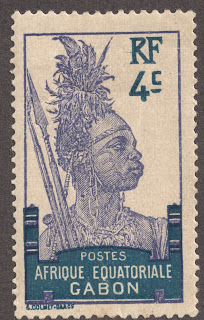 1910-22 Scott 51 4c violet & deep blue "Fang Warrior"
A Bantu tribe in Gabon, Cameroon, and Equatorial Guinea
Quick History
On the west coast of Africa, Gabon became a French Colony in 1885. The Capital was Libreville, and the population was 400,000 in 1934. The name "Gabon" comes from the Portuguese "Gabao", meaning "cloak", the shape of the Komo River estuary by Libreville. Bantu tribes inhabited the area.  Pierre Savorgnan de Brazza explored the territory, and later became colonial governor.

Gabon had handstamped surcharged French Colonies stamp issues beginning in 1886. Then, from 1891 to 1904, Gabon was part of the French Congo. Gabon again issued their own stamps in 1904 with the "Navigation and Commerce" French colonial design. Although Gabon entered the Federation of French Equatorial Africa (along with three other colonies) in 1910, Gabon had their own stamp issues until 1936. Some of the later Gabon issues were overprinted "French Equatorial Africa".

After 1936, only French Equatorial Africa stamps were issued. 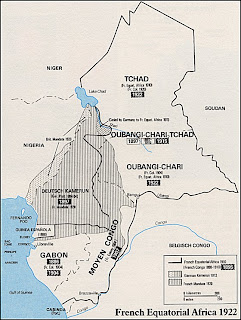 Gabon, as the Gabonese Republic, became independent from France in 1960.

Modern day Gabon, about the same territory as the French colony


French Equatorial Africa stamps were issued exclusively after 1936, but the name has existed since 1910. Initially, Gabon and Middle Congo with its military dependencies were politically united as French Equatorial Africa, although each colony had administrative autonomy and had their own stamp issues. Ubangi-Chari-Chad was made an autonomous colony in 1915, and then in 1920 Chad was made an autonomous colony. The four colonies listed above were administratively united as one colony in 1934, and consequently the separate colonies stopped their own stamp issues in 1936. So to summarize: French Equatorial Africa consisted of four dependencies; namely Middle Congo, Ubangi-Shari, Chad and Gabon. 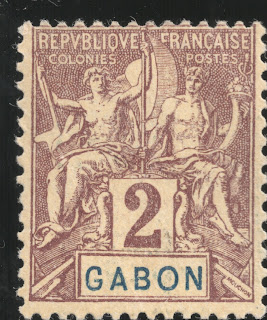 Not very affordable are the handstamped ( "GAB" or "GABON") surcharged French Colonies issues of 1886-1889. They consist of 15 stamps, with the least expensive @ $65, but usually much more. They would interest the specialist, but probably not the world wide collector. 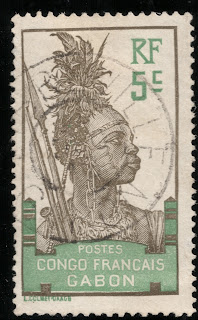 1910 Scott 36 5c olive gray & green "Fang Warrior"
Note the "French Congo" inscription
The 1910 series, consisting of 16 stamps, had local images, including "Fang Warrior", "Fang Woman", and "Libreville". This series, with the "French Congo" inscription, only lasted a short time. Consequently, the CV are more expensive than the subsequent series, ranging from $1+ for the 1c up to $300+ for the 5fr denomination. Seven are valued @ <$10. 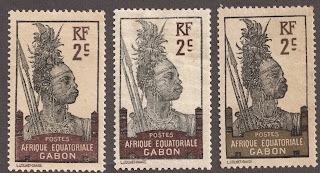 1910-22 Scott 50 2c black & chocolate "Fang Warrior"
Scott 50a "White paper"
Scott 50b 2c gray black & deep olive
The next series, consisting of 23 stamps, and issued almost immediately after the first series, had the same three designs. Note the "Equatorial Africa" inscription. Seventeen of these stamps can be had for <$2.

Generally the stamps are on dull cream paper. But some are issued on white paper (illustrated), are valued higher, and are given minor numbers by Scott. I only became aware of this when I noticed some paper color differences in my collection.

Same with the 2c gray black & deep olive color variation illustrated above. I happened to notice a bit of subtle color changes in some stamps I had in my feeder collections. Only then did I realize these are minor Scott numbers. It might be wise to check your own collection for these "hidden" minor numbers. :-) 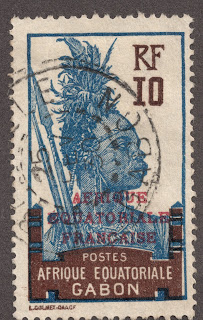 1926 Scott 90 10c dark blue & brown "Fang Warrior"
This series is overprinted "French Equatorial Africa"
The next issue (27 stamps), based on the previous designs, was produced between 1924-31, and was overprinted "French Equatorial Africa".  In addition, eight stamps were surcharged with new values between 1925-28. Twenty-five of these stamps can be had for <$2. 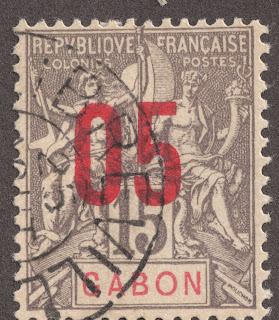 1912 Scott 74 5c on 15c gray surcharged in black or carmine
Check the spacing between the numerals: Here 1.5mm
Note: One can make out the Capital "Libreville" on the cancellation
As in other French colonies we have reviewed, the "Commerce and Navigation" design was surcharged in 1912. The surcharged issue had 13 stamps, and twelve of them are <$2. But the spacing between the numerals can vary. The wider spacing (2.25mm vs 1.5mm for the 5c) is given minor numbers in Scott , and are worth at least 5X as much. Worth checking out. :-) 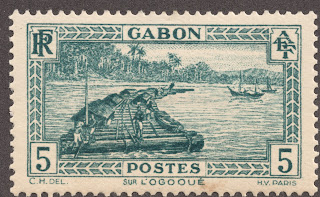 1932-33 Scott 127 5c greenish blue
"Timber Raft on Ogowe River"
This 24 stamp issue was short lived
The next major issue with a change in design occurred in 1932, but only lasted a few years, as Gabon's stamps were subsumed under the "French Equatorial Africa" designation after 1936. The  illustrations consisted of three designs: the one shown above, "Count Savorgnan de Brazza" ( the colonial governor), and "Village of Setta Kemma". The 24 stamps issue has fourteen valued at <$2.

So what do you think of this next stamp? 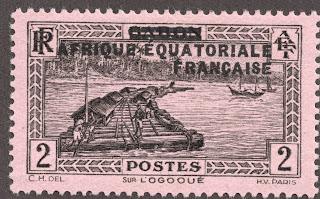 Deep Blue
Deep Blue, on fourteen pages, has a space for all the Scott major numbers. The minor numbers that I've discussed ( "white paper" variations, subtle stamp color changes, spacing between surcharged numerals) do not of course have spaces. These additional stamps can go on the same page as the major numbers (if room), or be put on a quadrilled page. 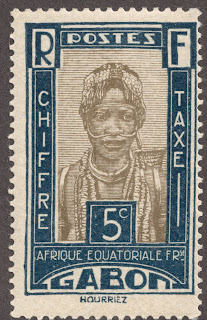 1930 postage due Scott J12 5c dark blue & olive
"Chief Makoko, de Brazza's Aide"
Many of the Postage Due issue designs are highly attractive
Big Blue
Big Blue,'69, on four pages, has 111 spaces for regular, semi-postal, and postage due stamps. Coverage is 61%. BB begins with the 1904-07 "Commerce and Navigation" issue (four spaces), and continues with better than average coverage, including 30 of the 33 possible postage dues. Kudos! :-)

I did notice a goof for the 1932-33 issue. The Scott 143 2fr brown red "Village of Setta Kemma", a $35 stamp!, is given two consecutive spaces: an illustrated space and a descriptive space. See image below. 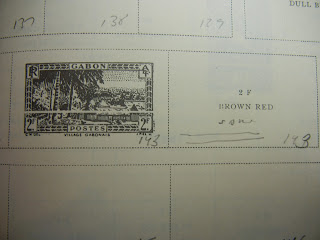 Comments
*error in BB; 143 ($35) given two spaces.
( ) around a number is a suggested blank space choice.
The '47/'41 editions definitely are arranged differently, but I did not do a formal evaluation 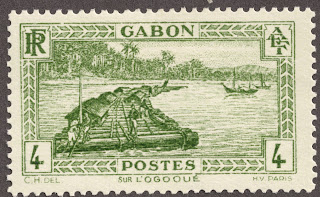 I am equally impressed with the very nice coverage of Big Blue, save for the printing goof.

Would like to hear from you - I need some comments!
Posted by Jim at 2:06 PM