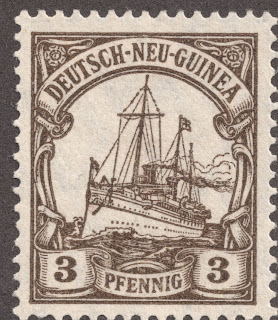 1919 Scott 20 3pf brown "Kaiser's Yacht" wmk "Lonzenges"
This stamp was never placed in use because of WWI
Quick History
German New Guinea (Deutsch Neu-Guinea) was a German colonial protectorate from 1894-1914. German New Guinea consisted mainly of the area called Kaiser-Wilhelmsland in north-east New Guinea, and the nearby Bismarck Archipelago.  The Capital was Herbertshohe (Kokopo), and the population was 600,000 in 1913.

In 1884, Chancellor Bismarck and the German Empire decided to embark on a colonial policy, but annexations would occur through grants of charters to private companies. On November 3, 1884, under the New Guinea Company, the German Flag was raised over the territory. German New Guinea eventually also served as the administrative center for the Caroline and Mariana islands ( bought from Spain 1899), and the Marshall Islands (1906).

After the Treaty of Versailles in 1919, German New Guinea (and all of the German colonies) ceased to exist. It then became the Territory of New Guinea under Australian administration until 1949. (The Japanese  occupied the territory during WWII.) 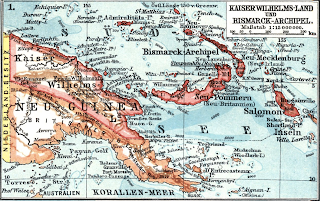 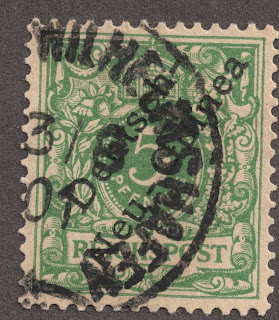 1897-99 Scott 2 5pf green
Overprinted "Deutsch/Neu-Guinea"
The 1897-99 issue, six German stamps overprinted "Deutsch-/Neu-Guinea", range in CV from $4 to $30+. Four are less than $10 CV. Of interest, Big Blue provides four spaces, just scraping the underside of the CV $10 mark. The postmark on the 5 Pfenning above is from Friedrich-Wilhelmshafen. 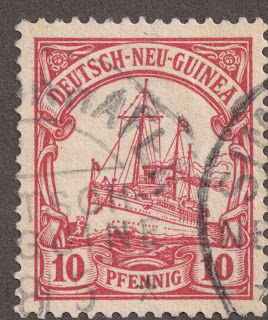 These stamps, no doubt because of WWI and the Australian occupation, were never placed in use. Naturally, they are only catalogued mint in Scott. Three stamps are $1+ or less.

Big Blue does not really provide a space for the 1914-19 issues unless one wants to admit them into the spaces intended for the 1900 (actually 1901) issue.

Deep Blue
The Steiner has one page for the issues of German New Guinea, and naturally provides a space for all. 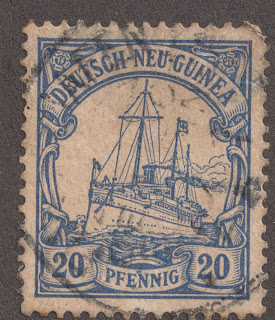 BTW, the German New Guinea section is found just before French New Guinea in the '47/'41 editions.

Out of the Blue
Many of the stamps are easier found in mint condition, as evidenced by the perusal of feeder albums and the Scott prices. And the 1914-19 issue stamps can only be found in mint, as they were never placed in use.