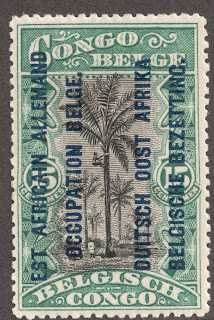 1916 Scott N19 15c blue green & black
Issued under Belgian Occupation
Stamps of the Belgian Congo, 1915, overprinted
Quick History
The German colony of German East Africa, opposite Zanzibar, and bordering on the Indian Ocean, was established as a protectorate by the German government on March 3, 1885. When the Sultan of Zanzibar objected, five warships were sent by Otto von Bismark to the area. The British and the Germans divided the mainland among  themselves, and the Sultan had to agree.

In 1890, the Heligoland-Zanzibar Treaty was instituted between Germany and the British. Germany gained the islands of Heligoland in the North Sea ( A British possession since 1814), while the British were allowed to build a railway through parts of East Africa to Lake Victoria.  And Germany agreed not to interfere with the British sphere of influence with the Zanzibar sultanate. 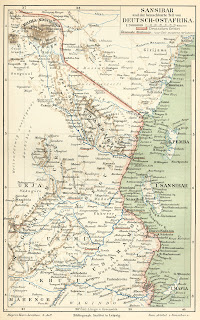 Germany, of course, lost it's colonies after WWI; with German East Africa divided between Belgium (Ruanda and Urundi), Portugal (Kionga triangle), and the British (Tanganyika).

German East Africa stamps are quite interesting and varied because of changes in denominations, watermark differences, and the occupation issues. 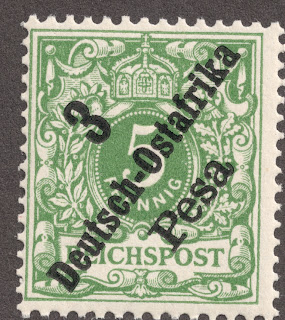 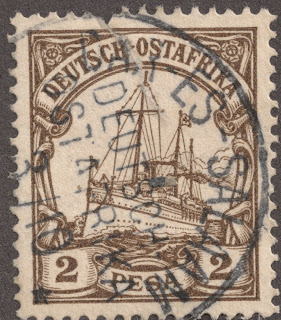 1900 Scott 11 2p brown "Hohenzollern"
SON: Dar-es-Salaam
The 1890 issue ( value in Pesa and Rupee) is the "Hohenzollern" yacht design for German colonies. Of the eleven stamps, four are <$5. The 2 Pesa is shown above. 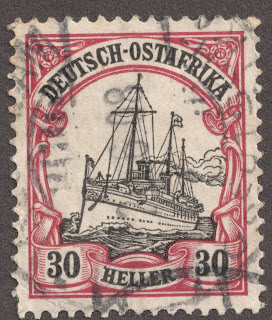 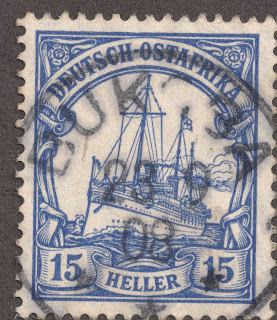 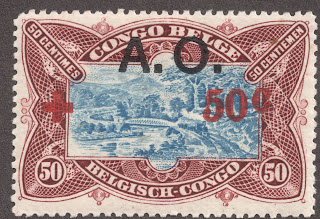 1918 Scott NB6 50c + 50c brown lake & blue
Issued under Belgian Occupation
Semi-postal stamps of the Belgian Congo, 1918, Overprinted "A.O."
Beginning in 1916, the Belgium occupation issues are found. These consist of various overprinted regular or semi-postal Belgium Congo stamps. Seventeen are listed for less than $1+. An example of the overprinted regular issue is shown heading this blog. And above, is an overprinted semi-postal Belgium occupation issue. The "A.O." overprint are the initials of "Afrique Orientale".

Finally, the British occupation of 1916-17 has Nyasaland Protectorate or East Africa and Uganda stamps overprinted with "N.F." or "G.E.A." respectively. Nine stamps can be found for <$5 CV. (Unfortunately, I have no examples to show at this time.) 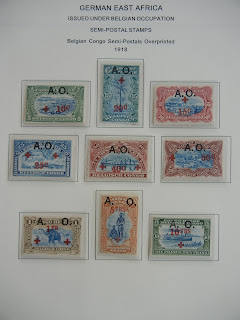 Deep Blue page for the Belgian Congo semi-postal occupation stamps
The Steiner has six pages providing spaces for all the major Scott numbers. As shown above, Deep Blue reveals it's value particularly when one is deep in an issue. Nice. :-) 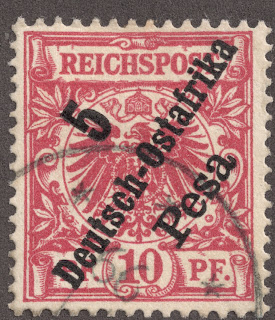 1896 Scott 8 5 pesa on 10pf carmine
Overprinted "Deutsch-Ostafrika"
Big Blue
Big Blue '69, on one page, has 33 stamp spaces for the German colony, and Belgium and British occupation. A nice selection, with no stamp crossing the $10 threshold.

Big Blue appears to exclude most of the 1905 "Hohenzollern"  non-wmk issue because of date specifications. See comment note under checklist. 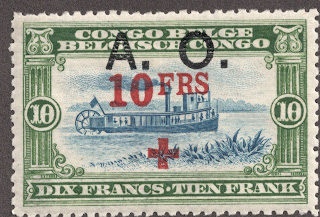 1918 Semi-postal Belgian Congo 10fr + 10fr green & blue Overprinted
Issued under Belgian Occupation
Out of the Blue
The occupation stamps from Belgium and Great Britain are quite interesting, reflecting the demise of the German colonies after WWI. Thirty by my count are also reasonably inexpensive. Unfortunately, my feeder albums do not have any British occupation stamps. I need to change that. ;-)

Note: Maps and photo appear to be in the public domain. One map is attributed to worldatlas.com.

British Troops in German East Africa
Posted by Jim at 11:52 AM