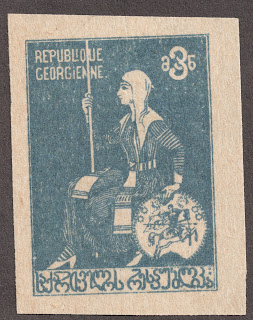 1920 Scott 17 3r gray blue "Queen Thamar"
Queen of Georgia from 1184 to 1213
Part of the "Golden age" of Georgian monarchy
Quick History
Update Note: The catalogue numbers for the 1919 and 1920 issue were changed for the 2014 Scott catalogue. The numbers here refer to the current catalogue, but the "old" 2011 Catalogue numbers are included in the BB checklist.

Georgia is located in the south Caucasus region of Eurasia. Georgians, an ethnic group, have their own language. But at the beginning of the 19th century, Georgia was annexed within the Russian Empire. Following the Russian Bolshevik Revolution of 1917, Georgia declared independence on May 26, 1918. A National Republic was formed, and Georgia issued stamps in 1919 and 1920. Georgia was under British protection from 1918-1920.

But the Red Army attacked and occupied Georgia in February, 1921, and the Georgian government fled the country. A Moscow directed communist government was installed. 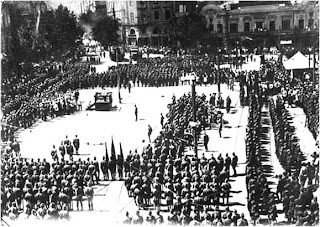 Red Army in Tbilsi February 25, 1921
The new Socialist Republic issued stamps in 1922 and 1923. But in 1923, Georgia became a member of the Transcaucasion Federation of Soviet Republics along with Armenia and Azerbaijan. So ceased "Georgia" stamp issues.

The Transcaucasion SFSR has stamp issues in 1923, when then the stamps were replaced by those of Russia. In 1936, Georgia became the Georgian SSR and part of the Soviet Union. 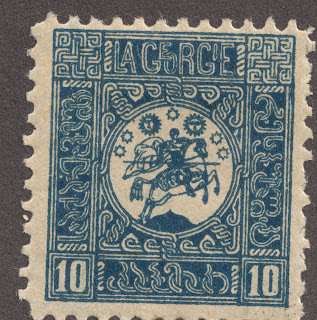 1919 Scott 1 10k blue  "St. George"
Part of the first issue of the independent National Republic
Into the Deep Blue
The 2011 Scott Classic Specialized catalogue has 36 major numbers. Nine numbers are for the regular issues of National Republic during 1919-20, while 27 numbers are for the regular and semi-postal issues of the Socialist Republic for 1922-23.

All nine issues of the National Republic are inexpensive @ <$1. They exist both in perforated and imperforated forms. Although the two types used to have their own Scott numbers (1947 catalogue), the 2011 catalogue had the the same number. But surprise!, the 2014 catalogue again gave major numbers to both types.

The Soviet Socialist Republic era ( 1922-23)  stamp values are mostly in the $3-$9 range. I found 15 stamps that are catalogued at less than $7. I don't have any of these stamps (except for some semi-postals), but a nice representative collection could be put together.  And I intend to do that. ;-) 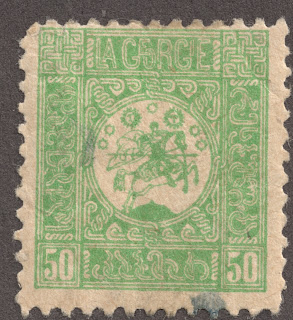 1919 Scott 3 50k emerald "St. George"
The first issue for the nascent republic had five denominations with the "St. George" design. The Coat of Arms of Georgia depicts St. George slaying the dragon. Illustrated below. Coat of Arms of Georgia 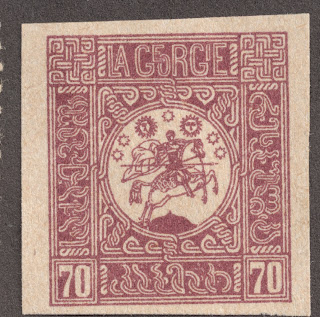 1919 Scott 11 70k claret
As noted, both perforated and imperforated varieties exist (now) as major numbers. The 70k denomination is illustrated above. 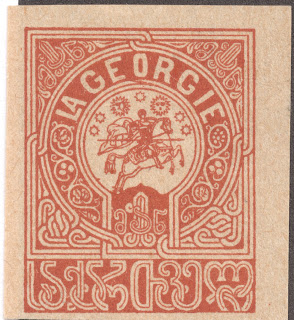 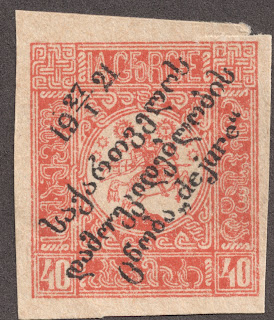 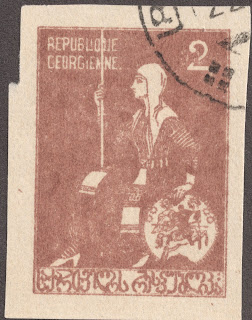 1920 Scott 16 2r red brown "Queen Thamar"
In 1920, the Republic issued a three stamp set featuring Queen Thamar, a female monarch who ruled Georgia during medieval times. She is still an important symbol in Georgian culture, and has been canonized by the Georgian Orthodox Church. 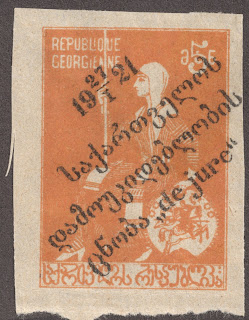 1920 5r orange design, overprinted
The 1920 set was also overprinted by the exiled government officials. In fact, the Soviet government in Georgia was not recognized by the British, France, Belgium and Poland through the 1930s.

This 1920 overprinted issue also has no Scott numbers.

The Soviet era stamps were issued for Georgia in 1922-23. I have examples of the semi-postals from 1922. Illustrated below. 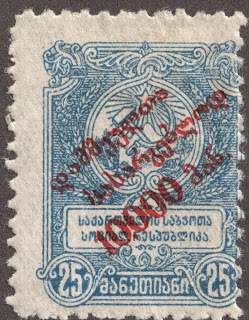 1922 semi-postal Scott B4 10,000r on 25r blue
A four stamp semi-postal set of the Soviet era was issued in 1922. Illustrated above is the highest overprinted denomination in the set. 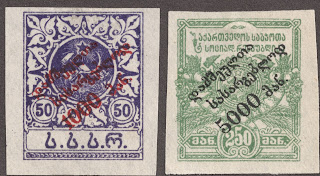 1922 Scott B1 1000r on 50r violet
Scott B3 5000r on 250r gray green
Semi-postals found imperforate
Scott notes this set was only officially issued perforate. But in fact imperforated specimens can be found without difficulty.

Deep Blue
The Steiner has five pages for Georgia, and of course includes all the major numbers. But, in addition, Deep Blue provides spaces for both the perforated and imperforated varieties of the National Republic 1919 and 1920 issues (which are now major numbers). 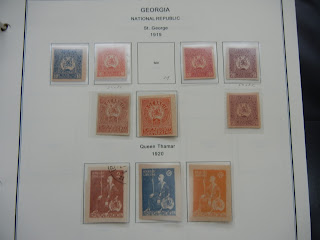 Georgia's 1919 and 1920 issues in Deep Blue
The perforated and imperforated varieties each have a page
I wonder if this was a legacy from when Scott had separate numbers for the varieties? Or is Steiner just being generous in this case? :-)  Anyway, the extra page is appreciated. 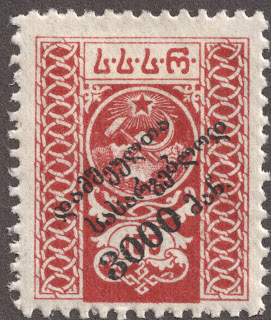 Of interest, Big Blue also provides separate spaces for the perforated and imperforated varieties of 1919 and 1920; although the 2011 Scott has only one number for each type.

No stamps over $6 CV are in Big Blue. It shouldn't be too difficult to fill the page. 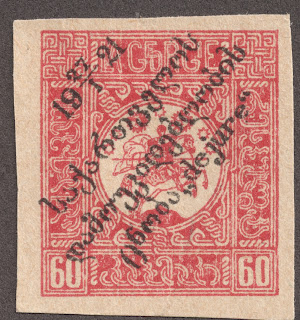 Note: Map, Coat of Arms, and Red Army picture images appear to be in the public domain.