Ecuador: 1908 Stamp Issue for the Opening of the Guayaquil-Quito Railway 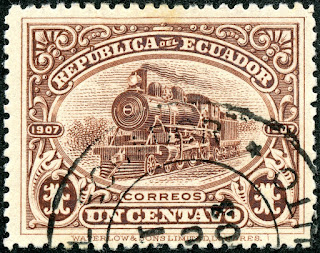 In 1908, Ecuador completed one of the most audacious engineering marvels of the early 20th century: namely, the completion of the railway from 8000 foot Quito to the lowland coastal city of Guayaquil. 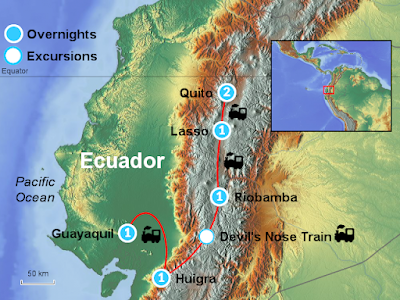 Modern Map of Train Route following the "Avenue of the Volcanoes"

An extensive quote, from the Encyclopedia of Latin American History and Culture (Encyclopedia.com), is here...

"During the late nineteenth century, Ecuador sought to emulate the success of other nations that had used railroads to create commercial opportunities and to spread modernity. However, railroads are a technology poorly suited to Ecuador's rugged Andean topography." 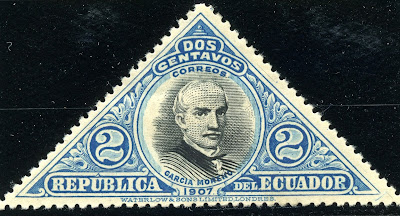 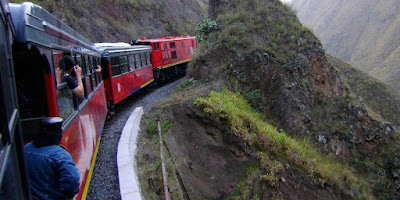 Modern Tourist Train on the Route
"The line, completed in 1908, proved an astonishing engineering feat, rising some 10,000 feet in but 50 miles, crossing the Chan Chan River some twenty-six times. The 281-mile line reduced travel time between the coast and the capital from two weeks to about twelve hours." 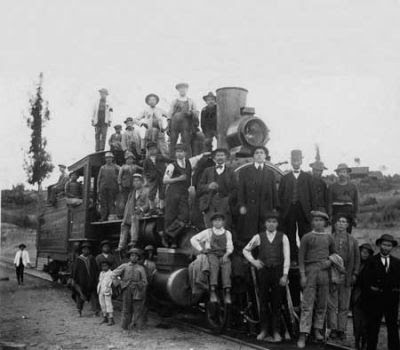 During Construction, near Quito, 1908
"Unfortunately, the railway proved as expensive to operate as it had been to build, and the enterprise almost never showed a profit. The high hopes for it proved unrealistic: The sierra remained economically isolated. Worse, servicing the foreign debt incurred in building the railroad became a bitterly contentious issue." 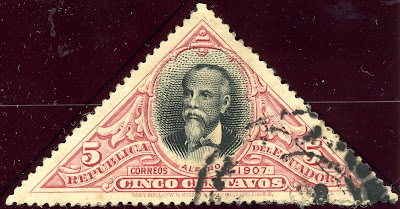 1908 Scott 176 5c claret & black "Gen. Eloy Alfaro"
From "The Ecuadorian Railway: The Most Difficult Train in the World (EcuadorExplorer.com)"...
"Over the next four decades, the Southern Railway claimed many more lives,
including Eloy Alfaro, the president credited with completing it. Rightist thugs sent by the opposition captured Alfaro and a group of his supporters, transported them to Quito on the train, and turned them over to an angry mob. Aside from the deaths of two presidents, the arduous task of linking the coast with the capital killed at least two thousand indigenous and Jamaican workers."
Well, if you are Ecuador, wouldn't you commemorate this feat with a stamp issue? 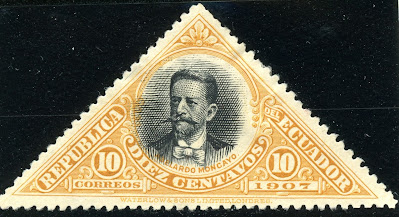 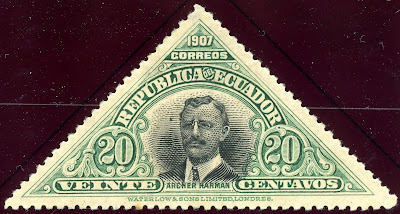 1908 Scott 178 20c green & black "Archer Harman"
Ecuador, as did many of the other Central and South American countries, contracted with London or New York printing firms for their stamp needs.  Most of the time there is no indication on the stamp which printing firm produced the issue: But here "Waterlow & Sons Limited, Londres" is clearly announced. 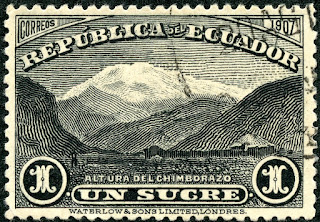 1908 Scott 180 1s black "Mt. Chimborazo"
What is interesting about this issue is Ecuador has "triangles" for five of the seven stamps in the set. !! Clearly, since the Cape of Good Hope triangle issue in 1853, "triangles" are beloved by stamp collectors, and postal administrations, hoping to add to their money coffers, are happy to oblige them. ;-)
In addition, the "triangles" are bi-colored": another favorite of collectors. And engraved!!!
Ecuador's issues from 1899 to 1928 (some 55 stamps) are bi-colored and engraved and remarkably inexpensive CV wise. True, most of the stamps only show center portraits of Ecuadorian notables, but they are very well done indeed. Even after a 100 years, these stamps are CV cheap, no doubt reflecting the supply/demand curve.
This set of seven stamps is a little bit more CV wise than other stamps of the era, and has increased  in the Scott catalogues (2011 to 2020) from $10+ unused to $14 unused, and $20 used to $28 used for the set. 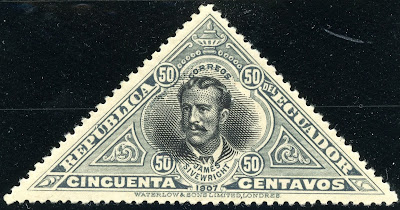 1908 Scott 179 50c gray & black "James Sivewright"
Out of the Blue
If I had to pick a region of the world to collect, considering the relative expense, South America would be high on my list!
Note: pics of the era are from the quoted articles, and are used here for educational purposes.
Comments appreciated!
Posted by Jim at 7:00 AM