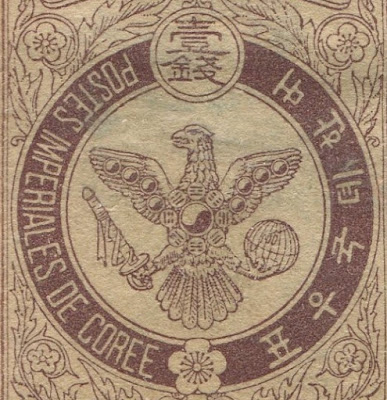 Koreans like emblems. I do too. Their stamps flounce across my album page like floats in a homecoming parade (see below). The only stamps issued by a united Korea, they abound in badges and insignia swathed in frilly borders. What’s not to like?

Well, apparently the Japanese didn’t like them. By the time Japan administered (1904) then annexed Korea (1910) all the stamps shown below were decommissioned, their usage banned, as a part of Japan’s effort to wipe out Korean identity. (Even frilly stamps sometimes have bloody tales to tell.) Only the Japanese language could be spoken in Korean schools and universities, historic Korean documents were burned, dissent was crushed, even movies had to be culturally Japanese. Korea as remembered was gone; now it’s totally Japan. Only Japanese stamps are good anymore.

What about Korea’s stamps scared the Japanese? The symbolism in the final series of Korean Empire stamps (1903) offers, I think, a clue (see above pic). The bird, a falcon, looks suspiciously like a Russian eagle; Russia was then Japan’s enemy. The bird’s breastplate is the Korean national symbol, the Taegeuk (yin yang), surrounded by eight trigraphs that repeat the yin yang in an endless cycle of universal balance. Eight more Taegeuks adorn the falcon’s wings. And, because the number eight itself has special meaning for Koreans, the falcon’s tail has eight feathers. That’s a lot of pro-Korean propaganda to squelch.

There’s more. The falcon’s right claw wields a threatening sword and its left grips a globe that insultingly shows Japan as a single island waiting, one might suppose, to be whacked. This stamp series also repeats the five-petaled mugunghwa flower, known in the western world as the rose of Sharon. It’s an ancient and, during the Japanese occupation, a somewhat secretive national symbol. Koreans planted mugunghwas to protest Japanese control.

Uncancelled examples of the 1903 series, like mine, were grouped and sold to collectors after decommissioning. 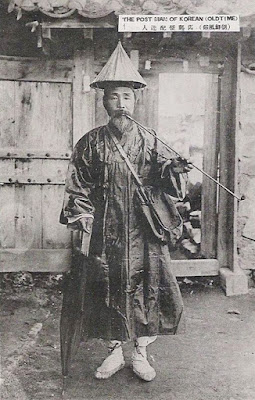 A Korean postman and, maybe, propagandist

Jim's Observations
The first stamps of Korea was issued in November 1884 during the Joseon dynasty. But the Post Office was burned down (Gaspin Coup) in December 1884, so only the 5m rose and 10m blue of the issue were used, and then, not much.

As one could guess, the three unissued stamps also entered the philatelic mainstream. They are listed in my 1947 Scott catalogue with a notation that they were never placed in use. 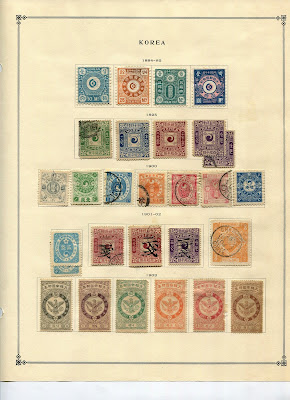 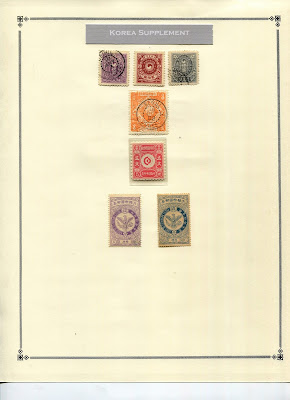