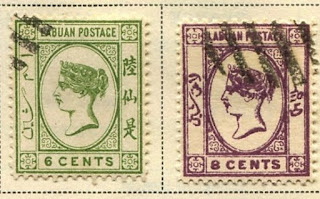 One good - One not
Bud's Big Blue
Bud's Observations

Before writing these observations, I reread Jim’s original post on Labuan and its 19th century forgeries. Sure enough, some of my stamps are forgeries. The purple 8 cent (above and on Page 1) is clearly forged, and badly. The poor Queen suffers considerable distortion. Even her picture frame fails to approximate the genuine. So, well after the scans shown below were made, the forgery was banished to the supplement page and replace by a more credible example.

One might think that the simple line drawings used for making the early lithographs and engravings would be easily forged. But they aren’t. A line drawing has many tricky parts, such as the original artist sometimes using a solid line for a change of plane and other times an implied line. Forgers almost always get it wrong. So, the 8 cent Queen’s cheeks, as shown, look flat and the forger gave her a chin dimple, while in the genuine example the cheeks appear rounded and there is no dimple. Shading lines on the back of the 8 cent Queen’s neck are shaky, a characteristic sometimes labeled “criminal tremors.”  Moreover, all lines are generally thicker and smudged on the fake -- all clues that forensic handwriting experts quickly notice.

The 1902-3 series featuring an approximation of the British crown (Page 2, top) seems a remarkable change of pace for Labuan -- from line drawings and overprinted North Borneo stamps to highly sophisticate engravings.  Among the last Labuan stamps, those with crowns have little risk of being forged.


Census: 59 in BB spaces, one tip-in, 20 on the supplement page (including forgeries).

Jim's Observations
Between the challenges of the genuine/forgery lithographed Victoria issues and the many superbly designed overprinted pictorial stamps, Labuan is a discerning collector's delight! 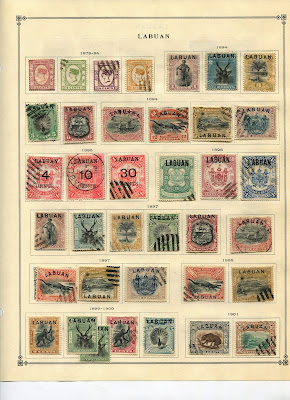 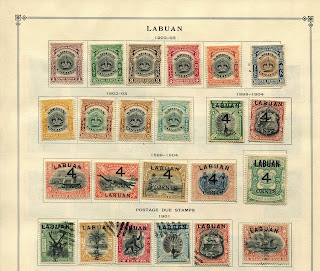 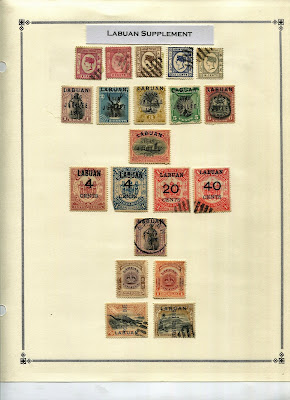