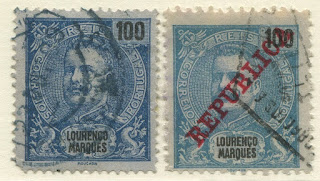 Kionga’s 1916 history provides, of course, an interesting context for these four rather ordinary stamps ( See Jim's blog post).  Portugal and Germany squabbling over boundaries of colonies that neither control today, battles fought in sweltering heat that neither side was equipped to handle, troops decimated by tropical and social diseases, Portugal’s eventual victory (it’s only territorial victory in WWI) -- all for a tiny sliver of African real estate that had about 4000 inhabitants (in 1910). Now part of the region of Cabo Delgado, Quionga village itself appears not to have grown much since then. Google “Kionga triangle” for rehashings of this history.

Another interesting aspect of these blue-on-blue stamps, however, relates to the stamps themselves. A grinning King Carlos gazes from them, although he was assassinated eight years before they were issued. The monarchy itself was overthrown six years before the issue. Lourenco Marques 100 ries stamps (Scott #44, 1898) were conscripted for Kionga usage, probably leftover stock from some postal warehouse. These were locally overprinted “Republica” in carmine for the provisional Lourenco Marques issue of 1916 (#149), then affixed with two additional overprints: the currency of 1913 and the “Kionga” designation. That’s five times through a printing press, counting two times for original #44.

King Carlos stamps, somewhat surprisingly, were never overprinted with the 1913 currency for use elsewhere in Mozambique. But they continued to be used with the original ries denominations and overprinted “Republica” until at least 1917, concurrently with the Ceres stamps denominated in centavos and escudos.

Census: only four, all in BB spaces. Kionga ties with Cochin China for the fewest stamps in the 1969 BB.

Jim's Observations
The border of German East Africa and Portuguese East Africa followed the Rovuma river. The exception was at the Rovuma river outlet to the Indian Ocean, where the Germans had established an outpost on the south side of the river.
This outpost was called Kionga (now Quionga), and had a population of 4,000 in 1910. This small area of 200 square miles (550 square kilometers) became known as the "Kionga Triangle" because of subsequent events that occurred during  WW I.