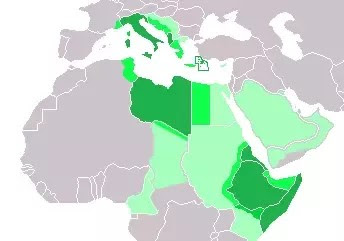 After leafing through many feeder albums, especially if they are Scott Internationals, one becomes aware that the stamps for some countries are almost always found in mint condition. It’s a sign that trouble was brewing. Either the country died and there were lots of unused stamps left over, or run-away inflation made the stamps worthless, or some foreign country had taken over.

In the case of Italian Colonies stamps, the trouble was brewed by Il Duce, Mussolini. He wanted to make Italy “great again” by forming a Neo-Roman Empire. The Mediterranean should be Italy’s pond, he thought. So, he set about by making colonies by force, starting with several North African countries. The Italian Colonies stamps were to be used there (the dark green bits in Africa on the above map, except for Ethiopia).

His plan didn’t work out very well. Folks in the colonies resisted and the Allies intervened, effectively crushing Italy’s expansionist ambitions. How far might Mussolini have gone had he not been deterred? No one knows for sure; even he probably didn’t know. Nationalistic fantasies tend to be opportunistic and capricious. Guessing what he might have liked has become a parlor game among amateur historians. The lighter greens on the above map represent one such guess. Others speculate that he wanted not only that, but much more, even parts of South America.

Italy was late off the mark with colonies in Africa, only initiating colonialism in 1890 with the colonization of Eritrea. And it was done more for enhancing the prestige of Italy, and converting native populations to Christianity, rather than for primarily economic benefits. 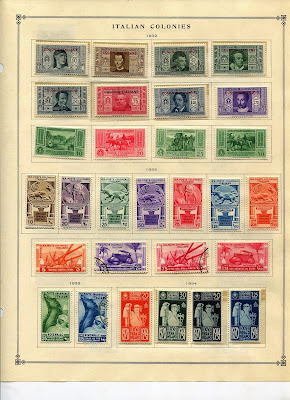 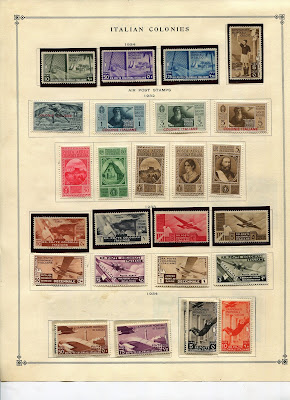 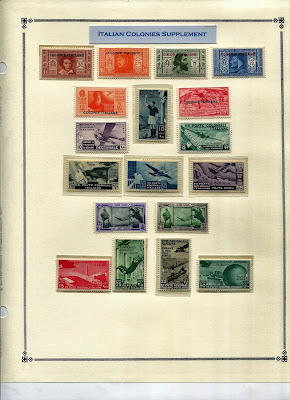