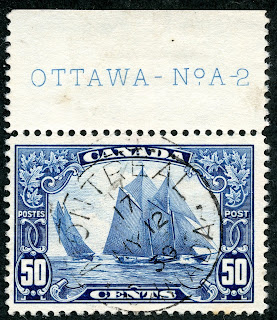 1929 Scott 158 50c dark blue
Schooner "Bluenose""
Into the Deep Blue
Canada has had more than its share of nicely designed stamps, especially the commemoratives and pictorials. I think what helps is Canadian stamps were virtually all engraved during the classical era.

It would be a shame to bypass illustrating them, so we won't. ;-) 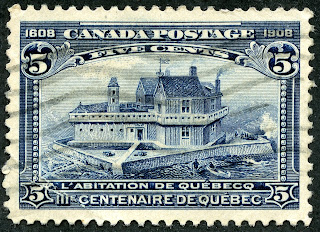 Because Canada was part of the British Empire, permission was sought to have non royal subjects and scenes depicted. King Edward VII gave his consent.

An illustration of the home (and fort complex) built by Samuel de Champlain in founding Quebec in 1608 is shown on the 5c dark blue. CV is $70. 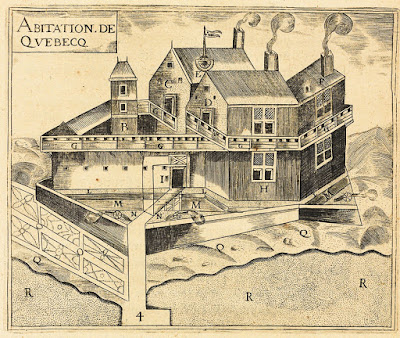 Abitation de Quebec, 1608, established by Champlain
Habitation de Quebec was a group of interconnected buildings set up by Samuel de Champlain when he founded Quebec in 1608. It served as a fort for New France, and was located near the former First Nations village of Stadacona visited by Jacques Cartier in 1535. 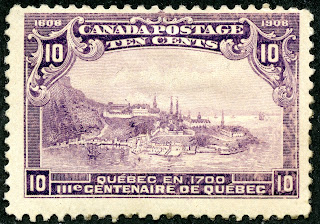 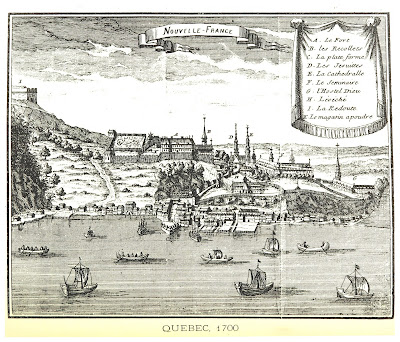 From page 252 of volume 2 of Historie des Canadiens-Francais 1608-1880
Book Published 1882; Image by Benjamin Sulte
Original held and digitized by the British Library
Looks like the stamp image was derived, in part, from this source. 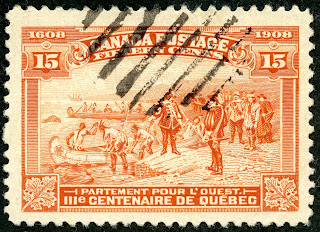 Apparently the scene on the stamp derives from a verbal description by Champlain: ""With our canoes laden with provisions, our arms and some merchandise to be given as presents to the Indians, I started on Monday, May 27th, from the Isle of Sainte Helaine, accompanied by four Frenchmen and one Indian". 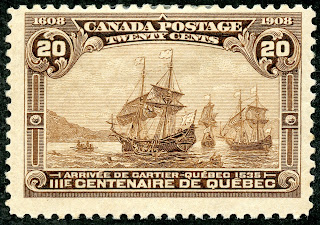 1908 Scott 103 20c yellow brown
"Arrival of Cartier in Quebec"
Depicts "Grande Hermine", "Petite Hermine", and "Emerillon", the three small vessels of Cartier's second expedition and their arrival near Cape Diamond. The stamp set was designed by Jose Antonio Machado of the American Bank Note Company in Ottawa, and engraved by Elie Tomothee Loizeaux. 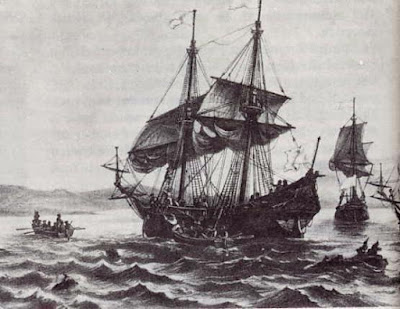 Painting/Sketch
Obviously part of the image design used for the 20c yellow brown
When I did a google search of the stamps image, I stumbled on a curious bit of history for New France. Between 1663-1673, some 800 single women from France were brought in to marry the men that had already settled there. The filles du roy, or the King's Daughters, is an interesting story indeed. 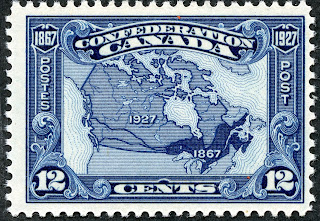 More detailed maps of Canada are available in the 1852-1902 Canada post. 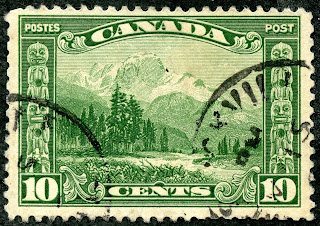 1928 Scott 155 10c green
Mt. Hurd from the Bell-Smith's Painting
"The Ice-crowned Monarch of the Rockies"
In 1928-29, an eleven stamp "Scroll issue" was published, with the five higher denomination stamps showing scenes/pictorials.

The 10c green shows Mt. Hurd in the Ottertail Range of the Canadian Rockies in British Columbia. A Totem Pole (Gitksan tribe, Skeena River) is depicted on each side in the frame. 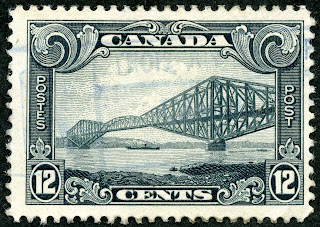 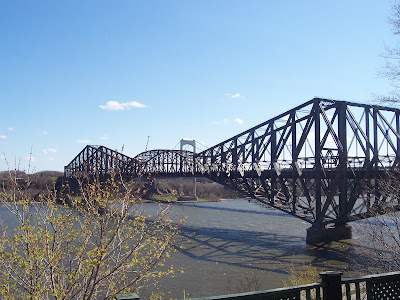 Quebec Bridge (Pont de Quebec)
Yes, Indeed!  It is the longest riveted steel truss cantilever bridge in the world, and serves as a pedestrian, rail and road bridge over the Saint Lawrence River. It took over 30 years to complete - in 1919, 88 lives lost, and survived two collapses (1907, 1916). 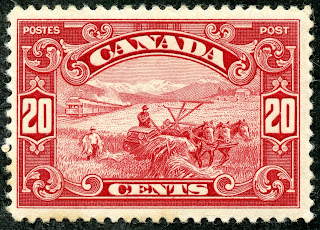 Scene near the foothills of the Canadian Rockies in Western Canada depicts harvesting wheat with horse drawn labor. 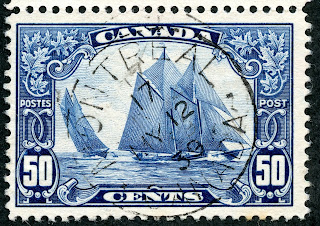 1929 Scott 158 50c dark blue
Schooner "Bluenose"
Please enlarge and look. Does it take your breath away? 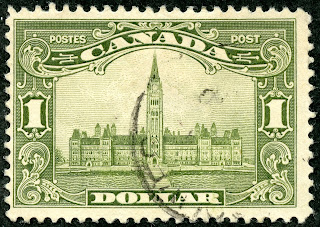 Home to the federal government, the Gothic revival style buildings were opened in 1866, one year before the Confederation. 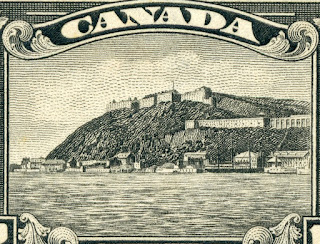 The Citadel, part of the fortifications of Quebec City. dates from 1673, and is still an active military installation. It has been involved in the Battle of Quebec 1690, and the American Revolutionary War - 1775. It was reinforced between 1820-1850 (star fort) in anticipation of more trouble with the Americans. Since 1920, the Citadel has been the home of the francophone Royal 22nd Regiment of the Canadian Army.

The 12c gray black was one of five pictorials released in 1930-31, part of the nineteen stamp "Arch Issue". 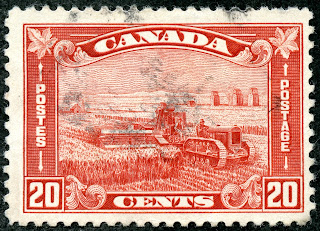 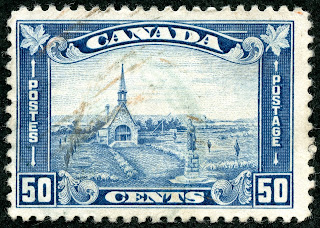 The story of the persecution and deportation by the British of the 12,000 Acadians (Settlement: 1682-1775) was made famous by the American poet Longfellow, with the 1847 poem, Evangeline.

Today, their French derived culture is very much alive as the Cajuns of southern Louisiana. 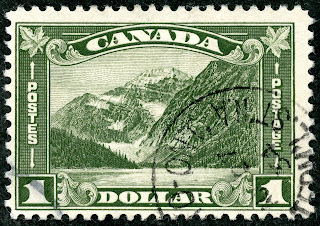 1930 Scott 177 $1 dark olive green
"Mt. Edith Cavell"
Out of the Blue
Besides enjoying the great designs, I learned some Canadian history too. !!

Note:Paintings/sketches/pics appear to be in the public domain.