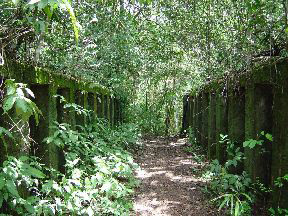 The art of remembering comes naturally to stamp collectors. Studying and arranging our paper bits often grows into imaginative and creative self-expression.

Remembering becomes art when it recollects forgotten pasts that shape, or ought to shape, the present. Artful remembering, being more than hearts and flowers sentimentality, has sharp vision into both past and future. It can be painful. Stamps provide this omni-focal view. Even “dead countries" stamps tell stories well worth remembering for their poignance and contemporary relevance.

Take Inini’s stamps. What kind of stamp collector wants to specialize in Inini? Who even knows what or where Inini was? Who cares?

Created by French authorities, Inini, the Amazonal hinterland of Guiana, was meant as a solution to three colonial problems: 1) saving the dwindling gold industry by improving infrastructure, 2) using the forced labor of political convicts from around the empire (mostly Indochinese) thereby neutralizing their dreams of independence, and 3) shielding the coastal areas of French Guiana from being known solely as a penal colony. None of it worked out well. Inini was a short-lived stamp-issuing territory (1930-1946). The jungle has quickly reclaimed the camps built for the Vietnamese prisoners (see above), but not the stamps. So we remember.


Census: 48 in BB spaces, one tip-in, four on supplement page.

Jim's Observations
Stamps of French Guiana were overprinted from 1932-1940. The Vichy government printed stamps in 1941 and 1944 without the "RF" inscription, but they were never placed on sale in Inini.
Was the attempt to build a railroad and colonize the interior a success? No. But the ruins of three prisons are still visible.

Despite the failed experiment, and lack of demand (to say the least) by the Ininians for post office services, the stamps of Inini are widely found in WW albums. The packet trade must have been busy. ;-) 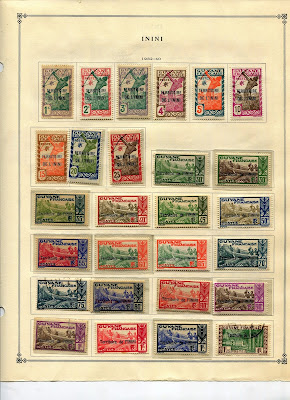 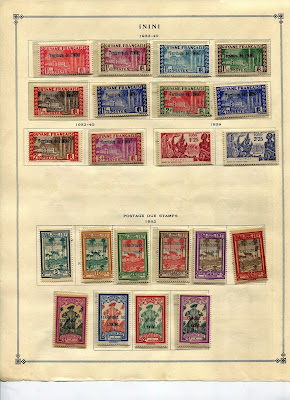 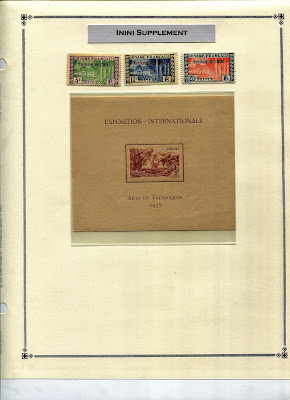