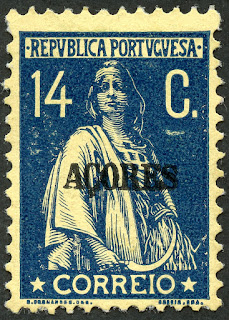 1920 Scott 172 14c dark blue/yellow
Ceres Issue of Portugal, Overprinted
With Imprint; Chalky paper; Perf 12 X 11 1/2
Into the Deep Blue
One reason I wanted to have two Azores blog posts was to be able to feature, in the second blog post, - this one- , the gorgeous engraved overprinted Portuguese commemoratives of 1925, 1926, 1927, and 1928 for the Azores. As I only published one Portugal blog post, and it only covered the stamps through the 19th century, we are in for a new treat here!

This one will cover 1912-1931, and start off with the famous "Ceres" issue. Since Scott completely reordered this issue in their catalogue the last several years, it behooves us to re-examine them.

Now, why are we ending coverage for Azores in 1931? That is because, beginning in 1931, the stamps of Portugal supplanted those of the Azores. 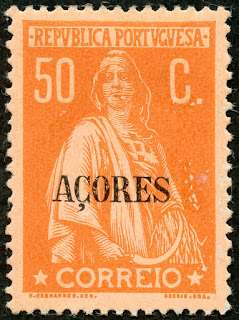 Well that changed by the time the 2014 catalogue was published. Now the Scott catalogue follows quite closely the Afinsa (Now Mundifil) Specialized Portugal catalogues in terms of varieties.

And that's a good thing, but can be challenging. ;-)

Well, what are the differences?

Now there are 109 major varieties with imprint on the foot of the stamp.

What that means is the collector may need to determine if the stamp is on "chalky" paper or ordinary paper, as the stamps may be identical otherwise. Specifically, the first eleven 15 X 14 denominated stamps (1/4c dark olive-15c plum) that exist as "chalky", have an ordinary 15 X 14 paper doppelganger. I wish I could tell you that it is always easy to tell the difference, but, especially for used "chalky" specimens, where the chalk is less evident, it can be a problem. The "chalky" stamps tend to have a higher CV than the ordinary paper stamps. CV for used chalky stamps ranges from <$1 -$10+  for 15 stamps. 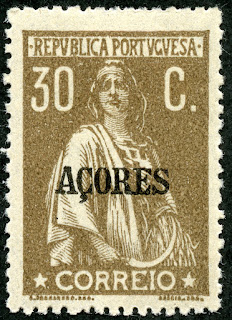 In other words DO NOT CONFUSE the old and new numbers! They refer to different stamps! If you are buying from a dealer, make sure you know if the dealer is referring to the Scott "old" numbers or "new" numbers. 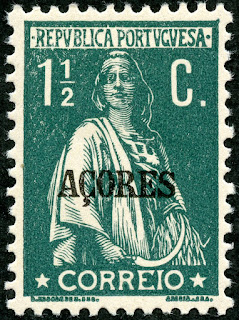 There are 10 ordinary paper stamp denominations that exist as both Perf 15 X 14 and 12 X 11 1/2, and now have different Scott numbers. Obviously, attention needs to be paid to this new reality.

If you collected using the old numbers back when (as I did), you will need to re-look at your "Ceres" collection and determine what inventory you now have based on the current catalogue. 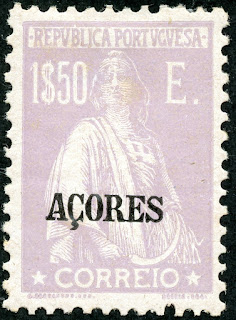 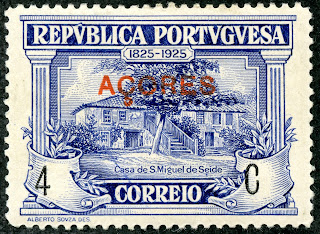 1925 Scott 240 4c ultramarine
"Castello-Branco's House at Sao Miguel de Seide"
Stamps of 1925 Portugal, Overprinted in Black or Red
Engraved; Values are Typographed in Black
The "Castello-Branco" issue of 1925 (20 stamps) ushers in the wonderful engraved series of stamps issued yearly until 1928 by Portugal, and overprinted for the Azores. 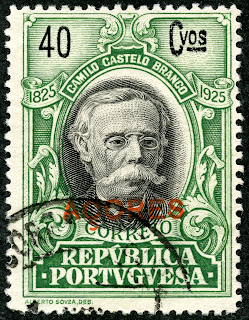 1925 Scott 246 40c green & black, red overprint
"Camillo Castello-Branco"
Camillo Castello Branco was a famous Portuguese 19th century writer. The issue was produced to honor the centenary of the birth of the novelist. 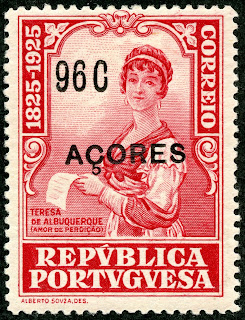 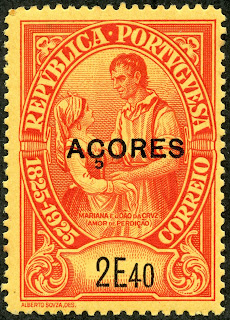 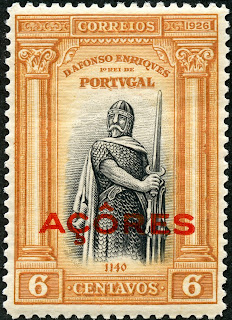 The issue celebrated the history of Portugal as an independent kingdom, which began in 1139. Alfonso I of Portugal, "the conqueror", is illustrated on the first three lower denomination stamps. 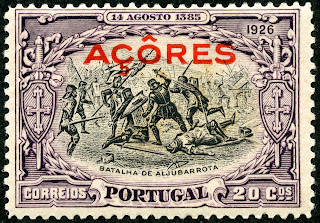 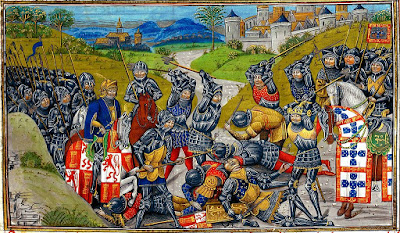 Battle of Aljubarrota by Jean de Wavrin 1479 (British Library)
The result of the battle was a decisive victory by the Portuguese. Of course, one doesn't expect countries to celebrate battles through the propagandistic medium of stamps in which they lost. ;-) 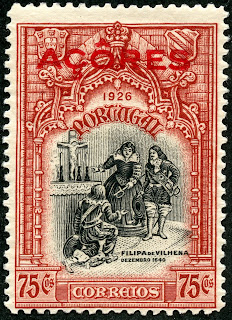 1926 Scott 269 75c red brown
"Filipa de Vilhena Arming her Sons"
On the morning of December 1, 1640, the noblewoman, Filipa de Vilhena, girded the arms of her two sons, and urged them to fight for the motherland. She became a symbol of  patriotism for her country.

The fourteen stamp issue has a CV of <$1 - $2+ for thirteen stamps. I think this issue is a perfect example of lovely engraved stamps that tell an interesting story, and can be enjoyed by the WW collector for very little money. 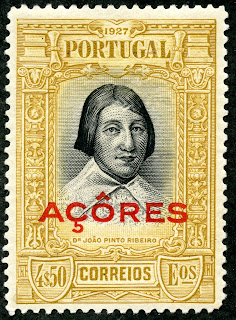 1927 Scott 283 4.50e bister
"Joao Pinto Ribeiro"
Second Independence Issue
On November 29, 1927, the "Second Independence Issue" was released, consisting of twelve engraved bi-colored stamps with six historical scenes/portraits for Portugal. The use of these stamps in Portugal was mandatory on the mails November 29-30, & Dec 1-2, 1927. I presume (although Scott doesn't say) that this overprinted issue was also mandatory in the Azores.

Scott states that the moneys derived from the sale was used to purchase a palace for a war museum.

Apparently, the moneys accumulated from this second Independence Issue ( and probably from the first Independence and third Independence issues as well) were also used in 1940 for the international exposition in Lisbon, and for celebrations held that year for the 8th century of the founding of Portugal, and the 3rd century of its restoration.

Joao Pinto Ribeiro (pictured above) was a celebrated conspirator of the December 1, 1640 revolution. 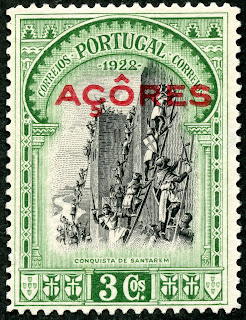 The battle scene shown above occurred on March 15, 1147 when the King of Portugal (Afonso Henriques or Alfonso I) and a small army climbed the walls during the night and opened the gates of Santarem, which had been controlled by the Muslim Arabs since the 8th century. The story of the "Conquest of Santarem" was told in a famous heroic tone medieval chronicle.

Scott labels the scene on this stamp "The Siege of Santarem", but that is incorrect. The siege occurred later in 1184, when the Almohad ruler, Abu Yaqub Yusuf  attacked Santarem in order to recapture it. He died during the siege, and his army was defeated by Afonso I of Portugal, a huge victory during the Portuguese Reconquista historical era. 1928 Scott 291 25c ultramarine
"Gualdim Paes"
Dom Gualdim Pais was a Portuguese crusader, Fourth Grand Master of the Knight Templar in the service of Alfonso I. and founder of the city of Tomar. 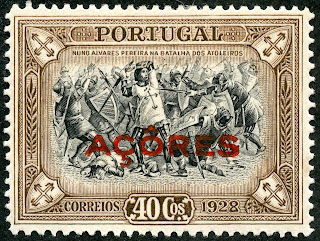 1928 Scott 293 40c olive brown
"Battle of Atoleiros"
The Battle of Atoleiros took place on April 6, 1384 between the Crown of Castile and the Kingdom of Portugal, resulting in a Portuguese victory. It was the first major battle during the so-called "1383-1385 Crisis". 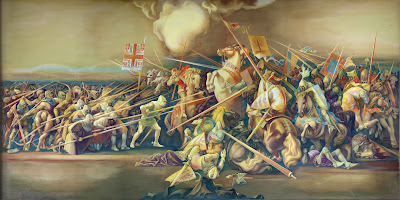 "Battle of Atoleiros" Fresco by Martins Barata (1966)
It was the first effective use of battleground "square tactics", whereby the infantry defended themselves from all directions. It was in use even 500 years later during the Napoleonic Wars and the Zulu War. 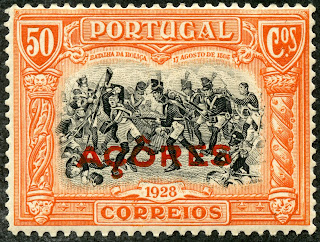 1928 Scott 294 50c red orange
"Battle of Rolica"
In the Battle of Rolica, a Anglo-Portuguese army defeated a Napoleon era French army on August 17, 1808. This occurred near the village of Rolica in Portugal. 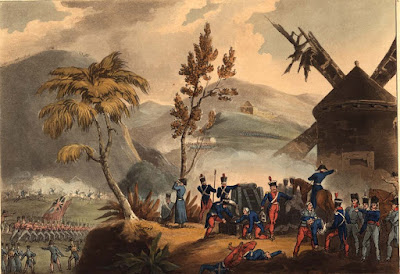 Batalha de Rolica, William Heath 1814
Biblioteca Nacional de Portugal
The Anglo-Portuguese army consisted of six brigades: five of them British, and one Portuguese.
The Anglo-Portuguese had 487 casualties, the French- 700. For the British, it was the first battle fought during the Peninsular War. The Peninsular War (1807-11) was a conflict between Spain, Britain, Portugal vs Napoleon on the Iberian Peninsula. 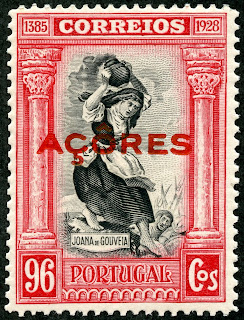 With the Battle of Aljubarrota of 1345, local legend touts the heroic Joana de Gouveia, "a woman of the people", who personally battled the Castilians.

What a scene! Who would deny that stamps can be used effectively for propagandistic patriotic purposes! 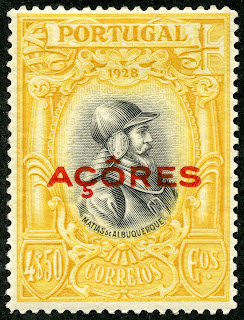 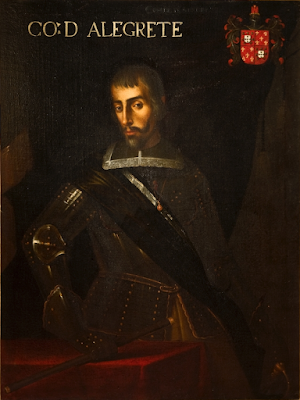 Matias de Albuquerque, Count of Alegrete
By Feliciano de Almeida, 1675
Galleria delgi Uffizi, Florence
He was known as a "Hero of Two Continents". He was involved in fighting against the Dutch between 1624-30, who were trying to invade Brazil. And he was a general in Portugal, fighting for Joao IV during the Portuguese Restoration War in 1641. 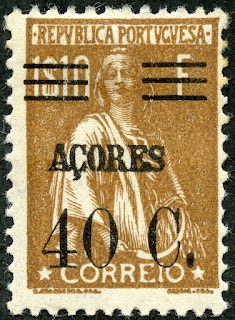 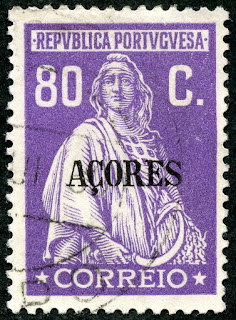 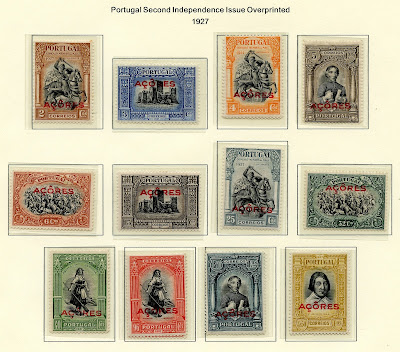 1927 Issue in Deep Blue
Deep Blue (Steiner) has 14 pages for the 1912-1931 time period. For the 2011 Scott catalogue, all the major numbers have a space. But Scott expanded the numbers for the "Ceres" issue by the 2014 catalogue, and my pages reflect the old 2011 numbers. I've added several quadrilled pages to create more space for the Ceres issue. 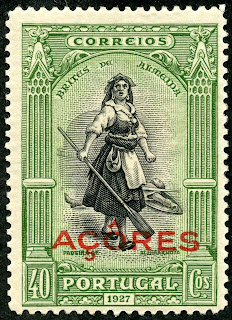 1927 Scott 280 40c yellow green
"Brites de Almeida"
She beat seven Castilians to death with a shovel
who were hiding in her oven
Out of the Blue
The battle scenes and portraits engraved on these little pieces of paper are a reflection of how people (here, the Portuguese) view themselves through a heroic lens.

Note:The  Battle of Aljubarrota painting, Battle of Atoleiros fresco, Battle of Rolica painting, and Matias de Albuquerque portrait scans all appear to be in the public domain.