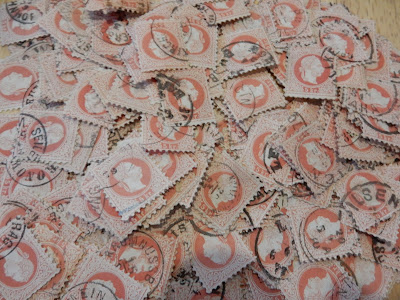 Parsing the 5kr into Types, "Coarse" vs "Fine",
and checking "Ears"!
Into the Deep Blue
As we know from the last Austria post, the Austrian 1867-1884 Franz Josef issues can be divided (more or less) into coarse and fine print.

But a special treat awaits those who examine the 5 kreuzer rose stamp: types and subtypes!

Interesting indeed for those of us of the parsing sort!

The Ferchenbauer catalogue divides the regular issue 5 kr stamps into four categories (types/subtypes Ia,Ib,IIa,IIb) - actually five, if one considers one of the categories can include a "coarse print"and a "fine print" (IIa-coarse, IIa-fine).

The Michel catalogue uses the same nomenclature, and has identical types and subtypes as the Ferchenbauer.

The Scott catalogue divides the 5 kr into three types (I,II,III).

The types/subtypes are only found for the 5 kr regular issue, and not the Office in the Turkish Empire 1867-1883 5 kr stamps, which only exists in the usual "coarse print" vs "fine  print" states. Therefore, this post will only cover the regular issue 5 kreuzer.

The most marked characteristic that distinguishes the types, in general, are changes in the arabesque design that surrounds the central oval portrait: most significantly the left lower arabesque portion.

Ferchenbauer Type 1a (Coarse Print) – Ear normally drawn (Scott Type I)
The Ferchenbauer subtypes for Type I are determined by whether the ear is normally drawn (Ia), or is disturbed (Ib). Scott makes no "ear" determination (or even mentions it), and lumps everything as "Type I". 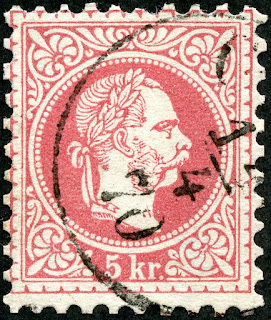 Austria Scott 29d 5kr lilac rose, Scott Type I
Coarse print
Ferchenbauer Type 1a
First things first: This looks like a coarse print, and note the postmark date is '1870", when only coarse print stamps were being issued. If one needs a refresher on "coarse" vs "fine", review the last Austrian post.

Ferchenbauer mentions that for Type I (both Ia and Ib), the "5 kr." script is shifted over to the right slightly, compared to Type II (both IIa and IIb), where the "5 kr." is more centered. The number "5" has a curved flag (bent top) for Type I, while flatter for Type II. These findings are rather subtle (and sometimes equivocal), in my opinion, and I didn't use them- rather, I relied on the changes in the ornaments in the left lower arabesque.

Let's look at the left lower arabesque area of the stamp... 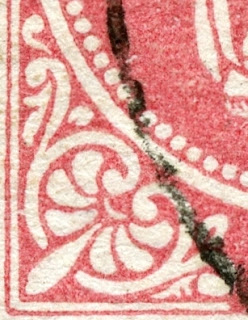 Left lower corner Arabesque
Scott Type I/ Ferchenbauer Type I
There are two pieces of ornaments that one should focus on.

Shorter free standing ornament
(Shaped like an anteater with a thick tail)
No curling of ornament around ball to right
Scott Type I/ Ferchenbauer Type I
The free standing ornament along the lower horizontal line looks, to me, like a petroglyphic drawing of an animal. The heavy tail, the two legs (visible), and the short snout: I call it an anteater, although I suppose an anteater would have a longer snout. The snout does not wrap entirely over the top of the ball to the right. (Type II does.)

This anteater petroglyph ornament is found for Ferchenbauer Type I (Ia and Ib), and Scott Type I. 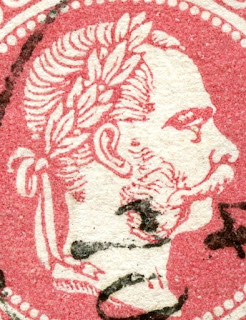 Crude Print - Note the ear
Scott Type I (1867-1872) is only found with coarse print
Ferchenbauer Type 1a (Coarse Print) – Ear correctly drawn
As mentioned, Scott does not pay attention to the ears, but Ferchenbauer does, and divides Type I into Ia and Ib, depending on the ear drawing.

Note here the middle line concave drawing of the ear doesn't continue to the end of the ear lobe, but turns to the right and joins the anterior ear line. The ear is nicely and "correctly" drawn.

This is Ferchenbauer Type Ia.

Ferchenbauer Type 1a (Coarse Print) – Ear correctly drawn
Here is a close-up of the ear for a Type I stamp that shows the middle concave line turning to join the anterior ear line. This is Ferchenbauer Type Ia. (Scott ignores all ear drawing variations.  They are all "Type I".) 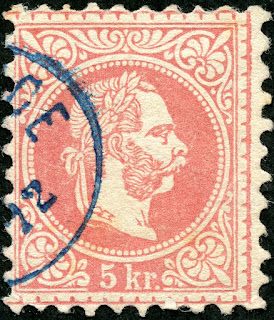 Austria Scott 29a 5kr rose, Scott Type I
Coarse print
Ferchenbauer Type 1b
This stamp is clearly a coarse print.

To determine type, let's look at the left lower arabesque area of the stamp... 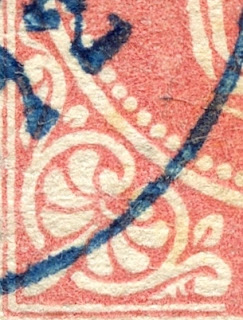 There is an "anteater" ornament along the lower right portion of the arabesque: Type I 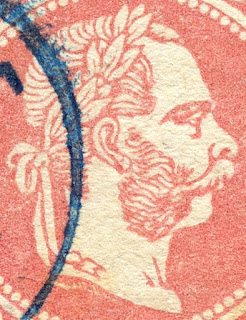 Crude Print - Note the ear
Scott Type I (1867-1872) is only found with crude print
Ferchenbauer Type 1b (Coarse Print) – Ear drawing is disturbed
Now, let's look at the ear to determine whether Ferchenbauer Type Ia or Ib.

Hmmm, the middle ear line is thicker, and drops down to the ear lobe.

This stamp is indeed Type Ib. (Compare with Type Ia above.)

5 Kreuzer Ferchenbauer Type IIa (1872) (Scott Type II)
From 1867, there were Type I 5 kr "coarse print" stamp produced, but, about in 1872, a subtle, but noticeable change in design was made. Ferchenbauer calls these new stamps Type IIa, while Scott labels them Type II. This new type can be determined by examining the lower left arabesque area of the stamp.

Furthermore, between 1872-1874, these were of the "coarse print" variation, while between 1874-1881, they were of the "fine print" variation. In other words, Scott Type II or Ferchenbauer Type IIa can either be coarse print or fine print. !! It is too bad that Ferchenbauer (of all catalogues!) does not make a formal notation for this important finding, so we will need to do it for ourselves. 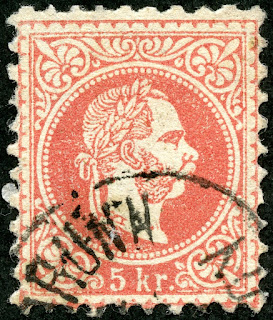 Austria Scott 29 5kr rose, Scott Type II
Coarse Print
Ferchenbauer Type 1Ia
This is, no doubt, a course print. Also note the (subtle) shift of the "5 kr.", more to the center of the stamp, which is a finding for Type II. The "5", I suppose, is a little more "flat" on top- but not by much. ;-) 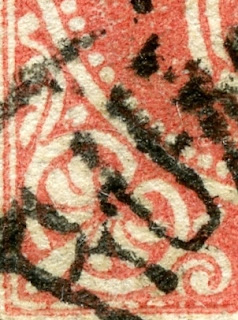 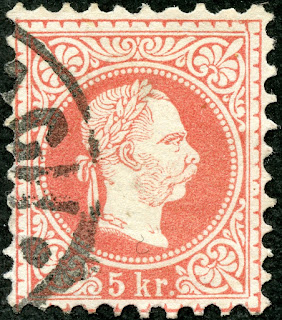 Austria Scott 29e 5kr brick red, Type II
Fine Print
Ferchenbauer Type 1Ia
This is the first fine print we have come across for this post, and I think you will agree that it meets the definition. 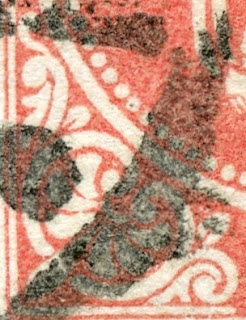 The thick "7" ornament is still clear of the ball ornament above.

These two findings determines that this stamp is a Scott Type II / Ferchenbauer Type IIa. 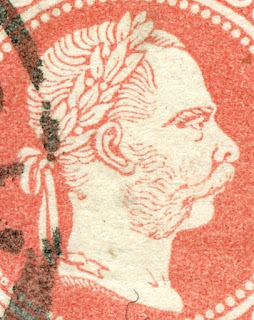 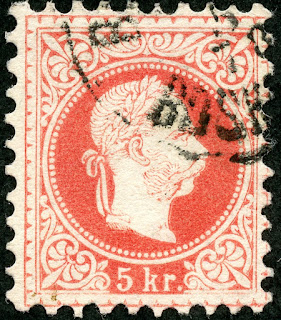 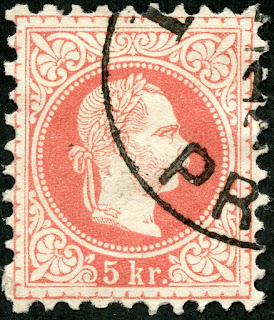 Austria Scott 29 5kr rose, Type II
Fine Print
Ferchenbauer Type 1Ia
Scott Type II (and Type I) stamps, by definition, have a thick "7" ornament that is clear or not attached to the rest of the arabesque above. But sometimes it is difficult to tell without careful examination. A close look here will reveal that it is almost attached, but not quite. 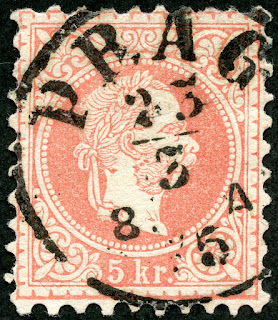 Austria Scott 29 5kr rose, Type II
"Fine Print" - but a coarse one!
Ferchenbauer Type 1Ia
I want to show you a stamp that is clearly Scott Type II, but is it a coarse or a fine print stamp? (Remember, this type can exist as both.)

Note the postmark date appears to be "1875", which is early in the "fine print" era that began in 1874. The stamps in the 1874 period can have intermediate impressions that can take on both coarse and fine characteristics.

I would call this example a "coarse" fine print. ;-)

And there was again a change to the lower right arabesque that is characteristic for this type.

Scott calls these Type III, while Ferchenbauer considers these still a subtype (IIb) of Type II. 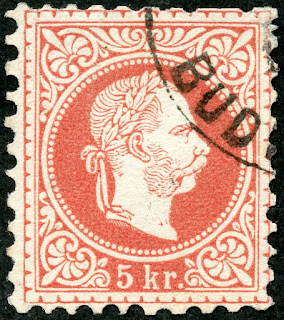 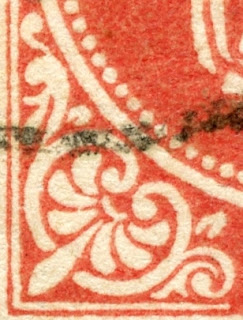 Left lower corner Arabesque
Scott Type III/ Ferchenbauer Type IIb
The formerly called"anteater" ornament (which looks now much more like a snail or slug) is draped over the top of the ball to the right: Either Scott II or III (Ferchenbauer Type IIa or IIb).

But the upper thick "7" ornament now appears attached on top!

Longer free standing ornament
(Two pod legs, and curls over the ball on the right)
Scott Type II or III/ Ferchenbauer Type IIa or IIb
A close look at what is now a "gastropod" ornament: Either Scott II/III or Ferchenbauer IIa or IIb.

The ornament is attached to the curve above
Seen with Scott Type III/Ferchenbauer Type IIb
The thick "7" is definitely attached. !! 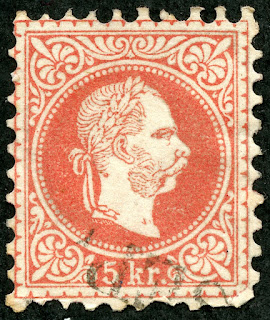 Austria Scott 36 5kr rose, Scott Type III
"Fine Print" - but a coarser one!
Ferchenbauer Type IIb
There can be variations in how "fine" the Type III fine print is. This example is definitely a Type III, which was only issued during the fine print era, but is of the "less fine" variety. 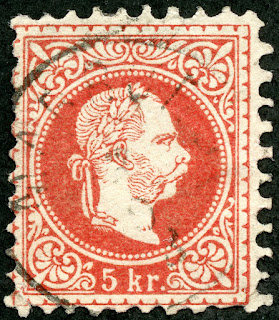 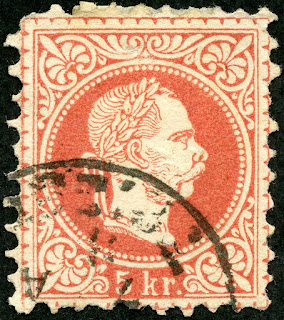 Austria Scott 29 5kr rose, Scott Type II
"Fine Print" - but a bit coarse!
Ferchenbauer Type 1Ia
Out of the Blue
It might behoove the collector to read and examine this post for a second time, as there is much to absorb.

I must say this was fun. WW collectors are known to have broad knowledge - a mile wide - encompassing many countries. But there is no reason why we can't strive to have depth considerably more than an inch deep at times. ;-)

Comments much appreciated!
Posted by Jim at 7:00 AM