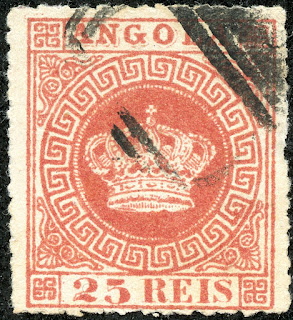 For the Angola 1870-77 issue, forgeries are not uncommon. There are many kinds of forgeries, but the big two are Fournier and Spiro.

We have discussed the Fournier forgeries with the two preceding posts... 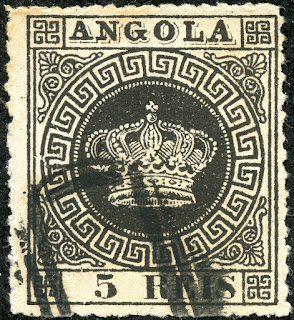 At least three of my Spiro forgeries are cancelled with this rather peculiar cancel. That might be a clue right there. ;-)

The thing that jumps out at me regarding this forgery is the fact that "Reis" starts out in the middle of the stamp, leaving the "5" with way more surrounding room than in the genuine. And the pearls on the right side of the crown going towards the orb seem small and misshapen.

Overall, though, the forgery is fairly nicely done. 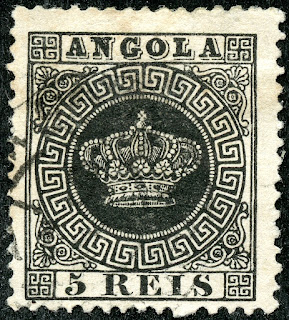 Here, for comparison is a genuine 5r black. Let's look at specifics.....

Upper: Genuine; Lower: Spiro Forgery
The forgery script has a a peculiarly formed "G", compared to the genuine. The "A" leans to the right. Spiro forgeries are sometimes labeled Type I & Type II. Type I will have the shadow markings around the script (as is seen here), while Type II will not. 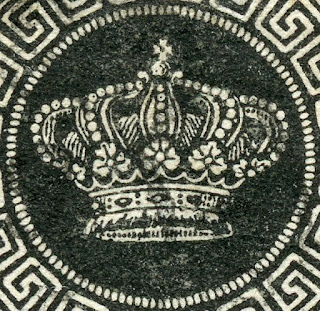 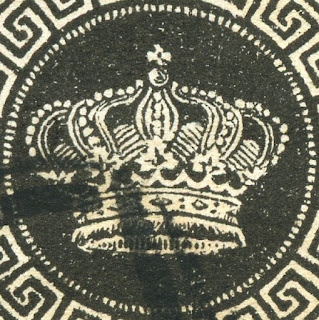 Upper: Genuine; Lower: Spiro Forgery
For the forgery, the Maltese cross is fairly large, but deformed, and the cross is not attached to the Orb (base). The pearls on the right side towards the Orb are not round and are small. The pearls on the far right side are separated from each other and detached from their support. Here, the central line of five pearls are detailed poorly. In other Spiro examples, they can barely be seen.

Upper: Genuine; Lower: Spiro Forgery
The Spiro forgery begins the "Reis" script in the middle of the tablet, much different than the Genuine. The Spiro "Reis" is more compact than with the Genuine. The top of the "5" is flat. 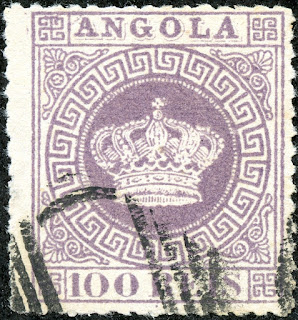 1870 Scott 7 100r violet "Portuguese Crown"
Spiro Forgery
Ok, we will compare some more examples. Here, I will compare a Spiro 100r violet with a Genuine 200r orange, as I do not have another  Spiro-Genuine same denomination in my collection. 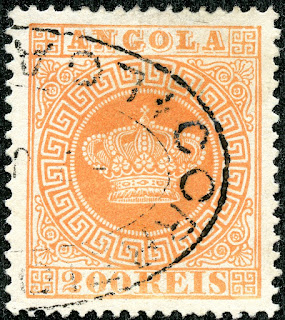 1877 Scott 8 200r orange "Portuguese Crown"
Genuine
This 200r orange is, in my opinion, a genuine. I ran this by a knowledgeable specialist on Angola forgeries, and he agreed with this assessment. Note this particular right upper quadrant scallop design shows six lobes, with a large central heart shaped lobe with an incomplete central-left line.

Upper: Genuine; Lower: Spiro Forgery
As was seen for the 5r black comparison, the forgery script has a a peculiarly formed "G", compared to the genuine. The "A" leans to the right. 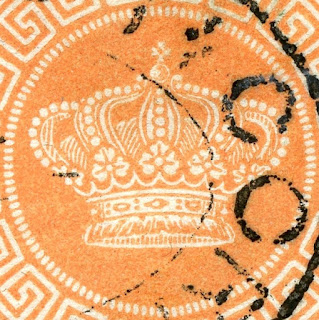 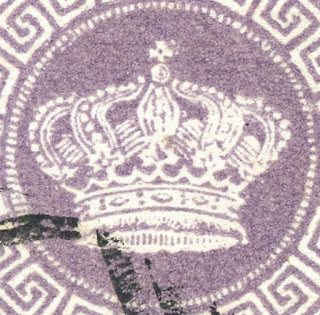 Upper: Genuine; Lower: Spiro Forgery
For the forgery, the Maltese cross is too large, and the cross is not attached to the Orb (base). The pearls on the right side towards the Orb are different sizes and some are small. The pearls on the far right side, which are deformed, are detached from their support. The central line of five pearls is essentially not seen. 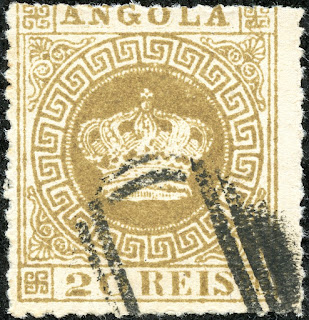 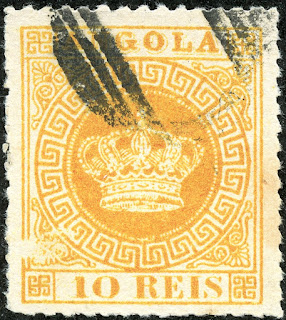 1870 Scott 2 10r orange "Portuguese Crown"
Spiro Crown
Out of the Blue
I hope this review of the Spiro forgeries for the Angola 1870-77 issue has helped the collector better able to spot these imposters. It certainly has helped me.
I will prepare one more Angola post which will evaluate the remaining Angola 1870-77 stamps in my collection: Genuine, Forgery, or Borderline/Unknown?
Comments appreciated!
Posted by Jim at 7:00 AM