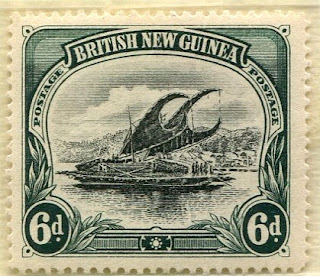 The lakatoi’s ingenuity and graceful lines caught the imagination of early colonists. Hence the stamp’s design. But for the Motu people, this immense canoe was much more than artistry. For them, the lakatoi and its journeys (hiri) meant survival (1). When crops failed, the Motu loaded their lakatoi with the clay pots, then sailed to the Gulf of Papua where they traded for sago, a diet staple extracted from the starchy core of palm trees. The sago, somewhat like tapioca pearls, prevented starvation when local harvests dried up or washed out with the monsoons. This pots-for-sago exchange had continued for hundreds of years before the first Europeans arrived (Magellan’s crew). 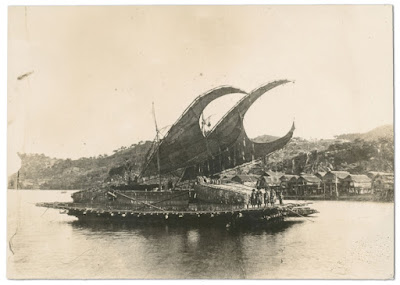 Hiri expeditions were treacherous – overloaded lakatoi sank, some were swept out to sea or wrecked, some landed among hostile tribes. Sailing winds were unpredictable. Lives were lost. The design and construction of lakatoi, understandably, is therefore cloaked in ritual, sacred beliefs, and reverence for ancestor spirits. Special feasts were required when hiri were planned. Holy men traveled with the crew to communicate with the spirits. Ancestors were praised upon a lakatoi’s safe return. Crab claws gained totemic importance for the sake of sailors’ safety. 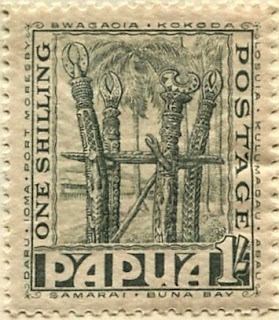 In the later 20th century, crab claws changed from being tribal and familial emblems to commercial symbols and generic identity badges for all Pacific Islanders. Detached from their ritual heritage, crab claws now identify hotel chains, serve as elevator button icons, and pop up as computer graphics. Ethnologists credit the 1901 lakatoi stamps for starting this cultural decay. (2) 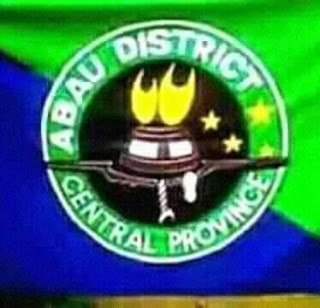 The bird of paradise serves as another Papuan symbol, although it appears less frequently on Papua’s stamps than on those of New Guinea. Thirty-eight species of this bird survive on New Guinea Island. Their plumage, once popular for hats in Europe and America, led to near species extinction. During the “plume boom” of the early 20th century, feather auctions were held in New York, London, and Paris. Export is now illegal; some local use remains permissible. 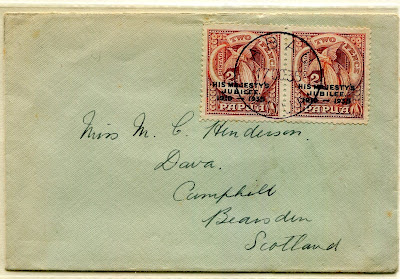 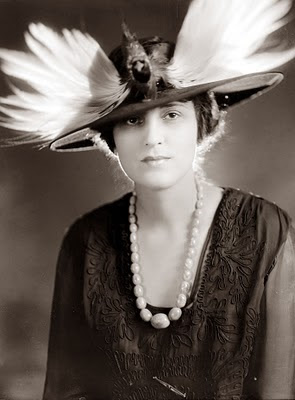 Besides lakatoi, crab claws, and feathers, Papua’s stamps have other intrigues. Who, for instance, is “Steve, son of Gala” featured on Scott #95? Who is Gala? If any reader knows, please post a comment below. His hat, nearly as tall as he is, wins the contest; the woman’s hat (above) finishes a distant second. 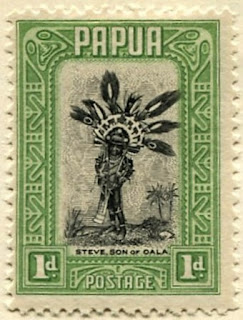 Changelings (a rather spooky term that experts use for stamps with fading colors) often show up in Papuan stamp collections. Orange, blue, and red, for instances, tend to discolor. There must be a chemical explanation. Or maybe it’s the skullduggery of philatelic pixies who pilfer our true colored stamps and replace them with mottled examples. 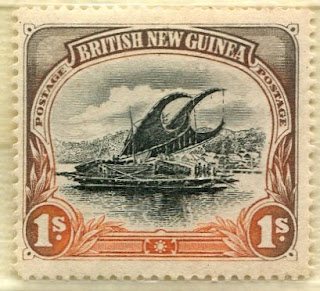 Despite the lack of early design variation, Papua’s stamps remain extremely popular with collectors. And rarer examples tend to be pricey. I think their fashionableness comes, in part, from their ability to evoke illusions of early colonists’ adventures, much in the same way as exotic feathers on women’s hats did.

Jim's Observations
I have a personal family anecdote that took place in Port Moresby when my oldest daughter was there a number of years ago. She was there as a Foreign Service officer, and, as part of her assignment, she was meeting with local government officials.  That evening, she was on a boat with a sizable group out of Port Moresby, when the engine quit. Fortunately, the sea was quite placid, but then it became dark. Eventually, she spotted a man with a flashlight coming in a small dingy to rescue them. She was quite grateful that  "women and children first" was still operative, as she was among the first to be taken back. 😉
Papua Blog Post & BB Checklist
Papua New Guinea: The Laktois 1901-10- a closer look
Papua
Page 1 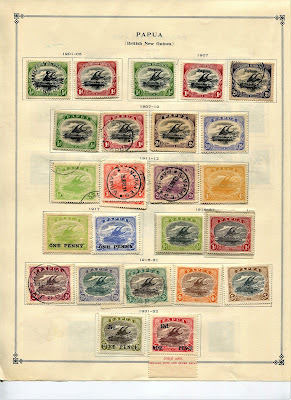 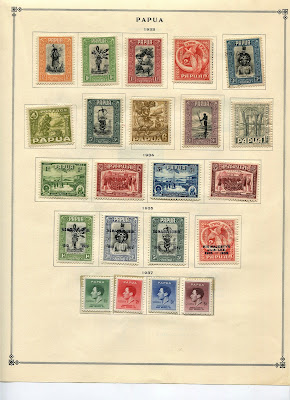 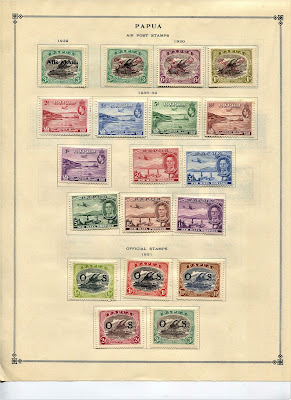 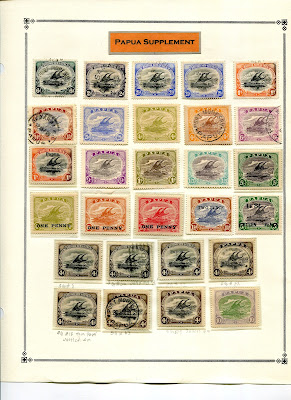 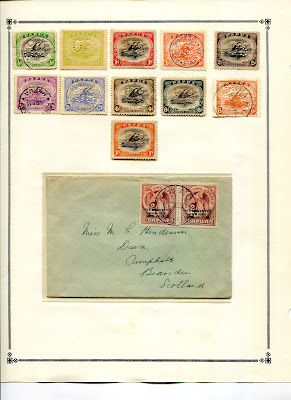 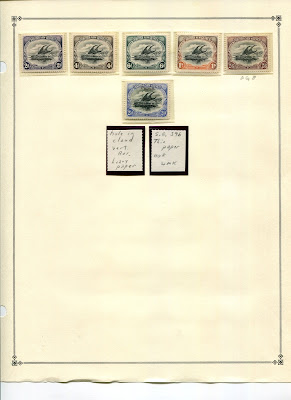