Although the Big Blue album (BB) has only 61 spaces under the heading “Palestine”, they’re all for stamps issued at a fateful time in the history of map slicing. If BB’s hacked-up organization seems baffling, bewildering and befuddling to you, blame the map slicers.

The two great map slicing escapades of the late 19th and early 20th centuries clearly frustrated BB’s editors. Imagine them trying to place their album’s stamps into some order that reflected where and by whom the stamps were meant to be used, only to have new national boundaries invented or old ones changed repeatedly. The editors never did get it quite right, as any review of the succession of BBs will show, but the stamp arrangements must have made some sense at the time.

Europe was obsessed with setting colonial boundaries, whether they seemed reasonable to people who lived in the colonies or not. Embolden by the 15th century Doctrine of Discovery, which by the 1880s was regarded as a point of international law blessed by church leaders, Christian nations had invaded and seized the land of non-Christians throughout the world (1). But what European monarch “owned” what? Enter the map slicers.

The first slicing, known as the Scramble for Africa, reached a climax in 1884. At the Berlin Conference, under the direction of Otto von Bismarck, European nations divided Africa into colonies with firm boundaries. No Africans were consulted. Princeton University library has posted online several historic maps of Africa (1554 to 1880); very helpful for collectors who want to know where, say, Oil Rivers is located and how it evolved. (2) Bismarck slicing, from a French cartoon

Palestine was more complicated. For ages, “Palestine” had been a popular nickname for an ill-defined region associated with the Jordan River, sometimes stretching from southern Syria to the Gulf of Aqaba. The term never denoted fixed boundaries, that is, not until after WWI. No one thought of themselves as being Palestinian. 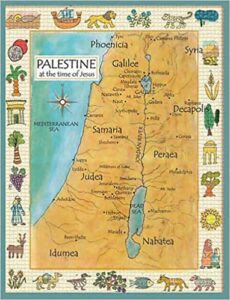 The area that became Palestine had been ruled by the Ottoman Empire (Turkey) since the 1500s. But the Ottomans sided with Germany in WWI. After they lost the war, they were forced out of the region. The victorious British envisioned an international zone that would be both a homeland for Jewish people and a united, free Arab state under Britain’s benign colonial oversight. They called it Palestine, a name redolent with biblical allusions. 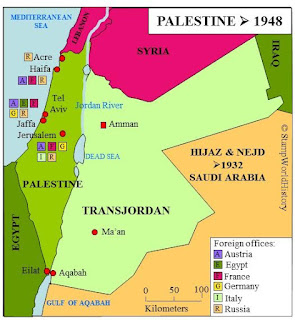 To say that this idealistic plan didn’t work out too well is understatement; a succession of riots, revolts, and uproars ensued. But the stamps that Britain issued for Palestine do reflect their efforts to make the plan work.

The first among these stamps (1918) were issued while military forces were still administering the area and were meant as a stopgap. They are inscribed simply EEF for the victorious British command known as the Egyptian Expeditionary Force. The EEF maintained control until the mandates for civil administrations began (1920). These stamps were used in Cilicia, Lebanon, Transjordan, and Syria, as well as in what was not-yet-but-was-to-become Palestine. BB provides seven spaces for these in its Palestine section, although they could have been correctly placed in sections for the other four countries. Or they might be thought of as British military stamps appropriate for placing under the Great Britain label. Maybe they could have been squeezed into the Egypt section. 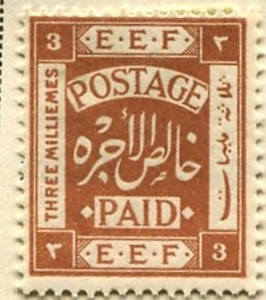 With the onset of British mandated civil administration, the existing EEF stamps were overprinted in Arabic, English and Hebrew. This intended, no doubt, to please both Jews and Arabs and to place visually the British between the two potentially hostile indigenous peoples. 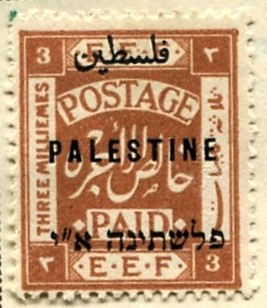 It didn’t work. Jews didn’t like the Hebrew transliteration of “Palestine” and Arabs rejected the designation preferred by the Jews. The British High Commissioner struck a compromise: two Hebrew letters, alef and yod, were placed to the left of the transliteration to symbolize “Eretz Yisrael”, the term the Jews wanted.

Alef and yod, from right to left

On postage due stamps, the alef and yod appear in parentheses. 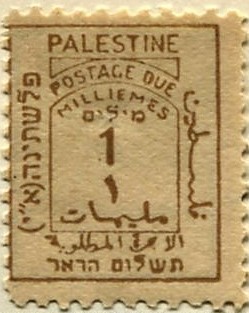 Six varieties of overprints were used between 1920 and 1923, some printed in London, some in Jerusalem. Scott’s catalog identifies 57 types and subtypes. Gibbons lists 74. BB provides only 18 undifferentiated spaces for these.  The scans of my collection (below) show an undifferentiated assortment.

The same EEF stamps were used in Transjordan, also a British mandate, but with Arabic overprints only. 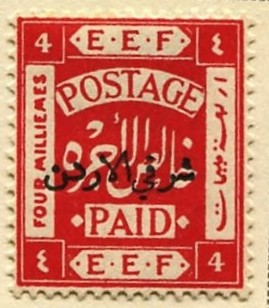 To be philatelically inclusive of the three major religions that revered Palestine, the British issued definitives depicting sacred sites (1927), balanced to please all three groups: Rachel's Tomb, the Jerusalem Citadel, the Dome of the Rock, and the Sea of Galilee. 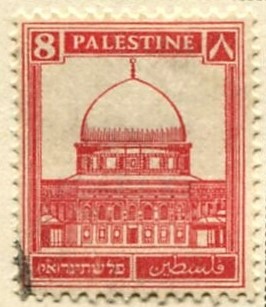 Deference to the three religions is also reflected in the triangular, dateless cancels used on holidays. Religious holidays were plentiful; mail delivery was doubtlessly slowed. 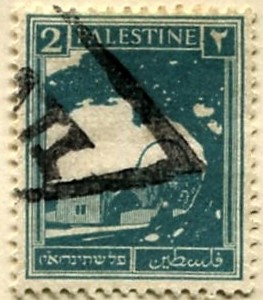 Census: 61 in BB spaces, one tip-in, 12 and an etiquette on the supplement page.

Jim's Observations
The 1918-45 British Mandate stamps of Palestine, perhaps, do not capture all of the turbulent activities of the times.But, incredible history (both ancient and modern), if there ever was one. The juxtaposition of Christian, Jew, and Muslim cultures makes this one of the most fascinating places on earth.
Palestine Blog Post & BB Checklist
Page 1 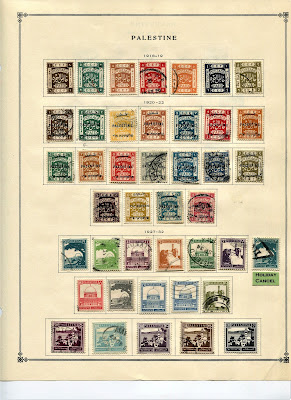 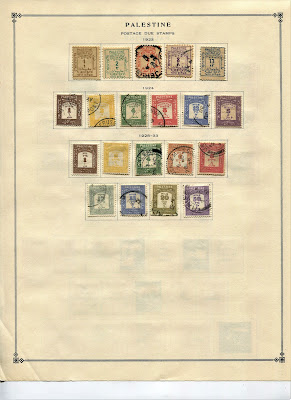 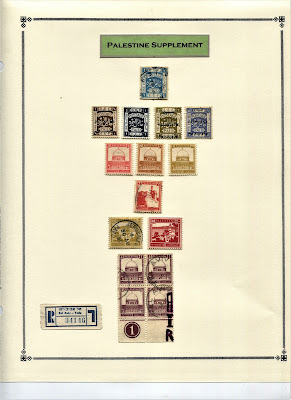