The June 13th post for this year featured some U.S. stamps I acquired recently....

One of the comments following stated that the "acquisitions" posts were their favorite type.

Well, I have another one. 😎

Our local stamp club had a "club donation auction" that consisted of donated stamps/albums. All money raised would support club expenses. This time, the items were again U.S., and some of them were quite impressive. I bid on the following, and managed to obtain them at ~25-38% CV. 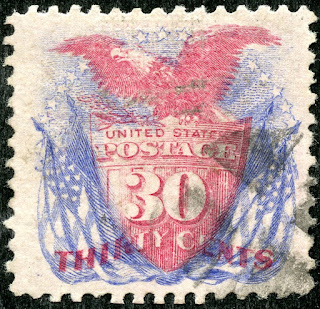 The 1869 issue is notorious for being off-center, so I was pleased to get this very fine specimen. CV is $375 (2021 catalog), and bidding, starting at $60, was spirited. I had already had lost the 1869 Scott 116 10c yellow "Shield and Eagle" when bidding reached 3x the minimum bid, so I was happy when my friendly competitor dropped out this time.  Of interest, the CV in 2011 was $525, so there has been some softening of CV prices. 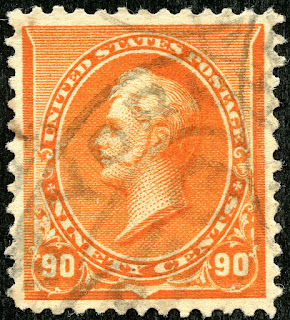 As mentioned before, I have a U.S. collection, but since my focus is classical WW, I only obtain a U.S. classical stamp when serendipity occurs.

The 1890 regular issue was printed by the American Bank Note Company, and is characterized by no triangles in the upper corners.  The triangles are found in the similar Bureau Issues of 1894 & 1895. 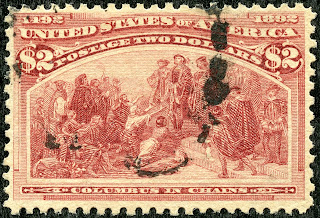 I, like many collectors, had the 1893 Columbians up to the 50c denomination for many years. Then I obtained the $1 value, as shown on my June 13th post. I thought I was done, as the Dollar values do not come my way very often. 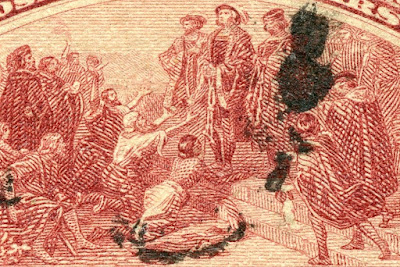 Now this is interesting. The June 13th post reveals I finally obtained a Zeppelin: the C13 65c green.

Collectors often evaluate a U.S. collection by flipping through the album and stopping by the Zeppelin spaces. Now I had one. Great! - but I didn't expect any more. After all, the numbers of Zeppelins produced for the two higher values was a low 60-70 thousand, and the CV was $$$.

A bidding competitor quickly snapped up a C13. But I already had that stamp, so O.K.

Then a spirited back and forth for the C14: I dropped out - too rich for me.

The "very fine" C15 came up. Again, a sword fight. But I think he had spent more than he wanted already for the C14.  I couldn't believe it. One of the iconic U.S. stamps was mine.

Closeup of C13 from June 13th post
Out of the Blue

Hope you enjoyed this light hearted (but wallet draining) post. 😎