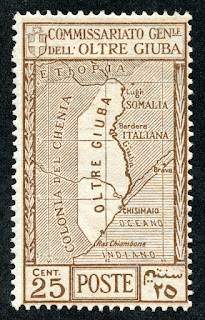 Trans-Juba (Jubaland; Ital., Oltre Giuba) stamps had a short span of use, issued 29 July 1925 and continued to 1 June 1926 when Trans-Juba was absorbed into Italian Somaliland. Britain had hoped to trade the northeastern part of Kenya, then a part of what was known as British East Africa, to the Italians in exchange for returning its occupied Aegean Islands to Greece, but Mussolini rejected the swap. So, the British agreed to give these 34,000 square miles to Italy unconditionally as a reward for supporting the Allies during World War I.

All of Oltre Giuba’s stamps are overprinted or inscribed Italian stamps of the mid-1920s, except for a definitive series of seven with a map of the area. Presumably, Italy needed to show where their war trophy is located. A strip of Kenya is shown on the left side of the stamp, Italian Somalia on the right.

Canceled stamps generally command higher prices than mint examples. Alas, I have none of the former. Bogus cancels abound. About 20 years ago, my entire collection (see below) came from a single feeder album.

Jim's Observations
I've never quite warmed up to Italian colony stamps. Generally, they are  unused, and many of them merely consist of overprinted Italian stamps, perhaps in a different color. They seem "artificial", intended primarily to extract money from collectors. (But, one can argue that is true for many/ most of the world's colonies. ;-)And a large portion of Italian colony stamps tend to be expensive.But little "Oltre Giuba" is interesting enough. And, if one wants to feel a bit superior, ask your non-philatelic friends where "Oltre Giuba" was located.
Oltre Giuba Blog Post & BB Checklist
Page 1 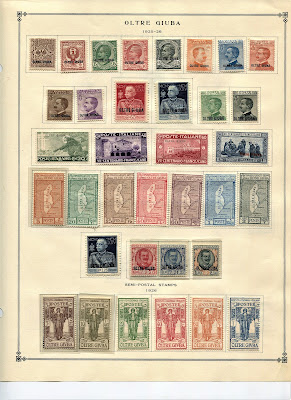