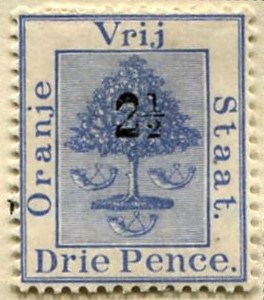 Orange Free State (OFS) didn’t get its name because oranges grow there, although there they do grow in great profusion. Nor did the Orange River get its name because of its muddy, orange-colored flow, although orange it is for much of its westward 1511-mile course across South Africa, from Lesotho’s mountains to the Atlantic. Even a fish species is named after its mud. 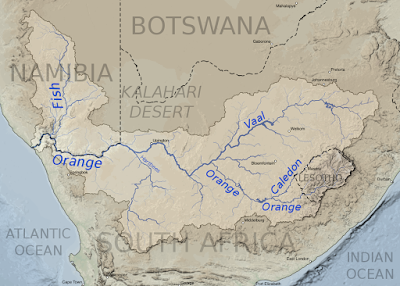 Map of the Orange River (1) 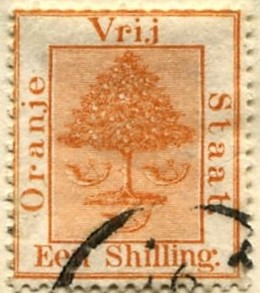 Why the seeming deception? The explanation is straightforward.

In fact, the image on these stamps isn’t meant to depict anything African at all. It’s a thoroughly European design.

Robert Jacob Gordon, a Dutch explorer and nature artist, named the river “Orange” in 1799 after the Dutch House of Orange, a European dynasty that traces its lineage to the medieval principality of Orange in Provence, southern France. Later, the river lent its colorful name to the government formed in 1836 by the Trekboers (Afrikaners, staunch Calvinists farmers – Dutch, French, German). In 1824, Trekboers arrived in what became Orange Free State (OFS) from Cape Colony in search of pastureland for their cattle. The Boers’ subsequent “Great Trek” increased their numbers rapidly.

By 1854 the Boers were bold enough to ask King William III of The Netherlands to give them a proper coat of arms and a flag, even though OFS was not a Dutch colony. The King complied and, being of the House of Orange, he bequeathed them the heraldry of that heritage. The stamps’ orange topiary is reminiscent of the carefully coiffured shrubbery that European royalty grew in their glass-enclosed orangeries. The three “buglehorns” come from an old House of Orange emblem and have no association with mail delivery. 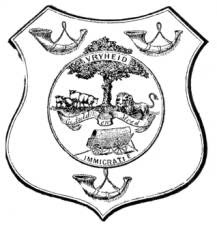 Arms of Oranje Vrijstaat, from the Government Gazette, 1863 (1)

Delighted with their fanciful coat of arms, the Boers garnished their stamps, coins, magazines and documents with all or parts of the design, especially the orange tree with a pruned lower branch. I suppose it helped legitimize their defiant existence in remote Africa. 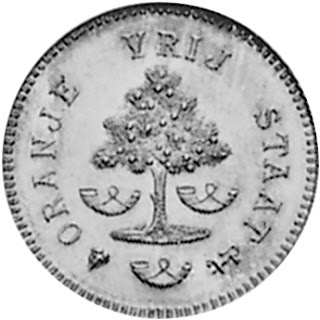 A variation was used as a hand-stamped precancel on postcard stamps. 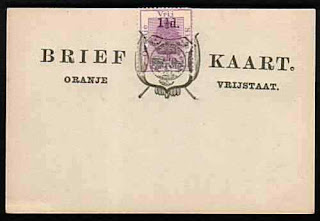 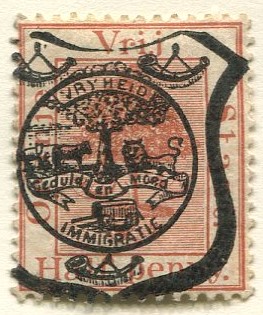 By the end of the 19th Century, what had started out as friendly relations between the British and the Boers turned sour and the 2nd Boer War ensued. The British ultimately won by using a brutal scorched earth strategy. As a result, OFS was renamed Orange River Colony (ORC) in 1900 and “V.R.I” (Victoria Regina et Imperatrix) was overprinted on remaining supplies of OFS stamps. 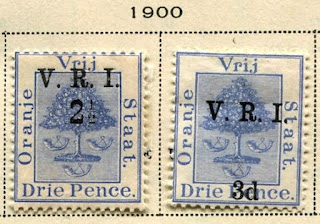 When these ran out, overprinted Cape of Good Hope stamps were placed in service. Then, after the Peace Treaty of Vereeniging was signed in 1902, standard British colony designs were issued featuring the crowned Edwardian profile flanked by African animals, a gnu and a tommie (Thompson gazelle). 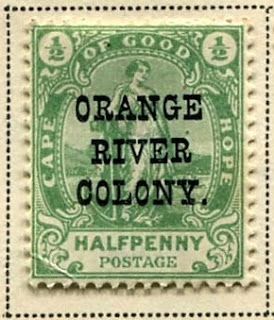 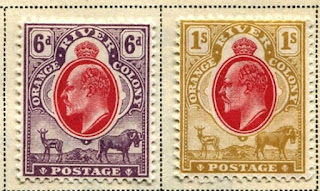 South Africa stamps were used after the colony became the Orange Free State Province within the Union of South Africa, 1910. As a tribute to Trekboers, though, South Africa continued issuing orange topiary stamps until the 1950s. Half of them have the Afrikaans inscription “Suidafrika” at the top; all have a nipped off lower branch, as on the original House of Orange emblem. Anomalies and variations sprouted like orange tree buds. 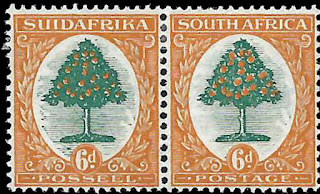 After South Africa’s state-enforced apartheid was dismantled (1993-94), the province was renamed Free State, dropping its imaginary connections with the House of Orange. Orange River retains its original name - and its orange color, too, thanks to diamond prospecting, farming, and elephant wallowing. 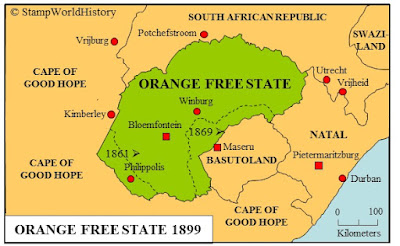 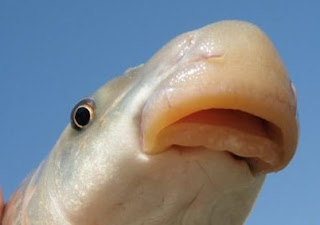 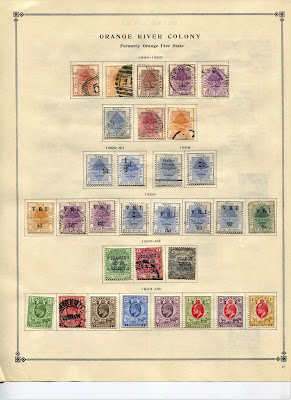 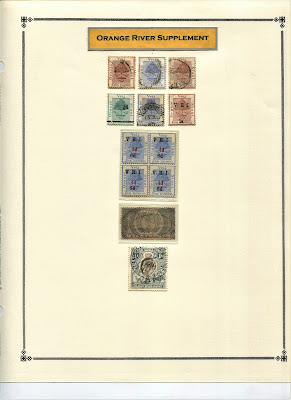