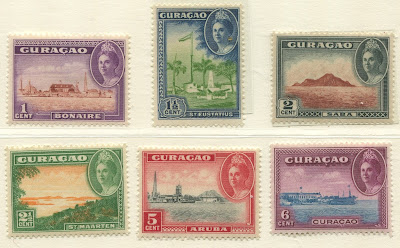 Scott #s 164-169, 1942
Bud's Big Blue
Bud's Observations
Stamp albums generally, and Big Blue in particular, never quite keep up with fitful national boundaries and identities. Like political maps, albums are out of date before they leave the printing presses. To make things even more complicated, poor editorial judgements and outright mistakes are commonplace.

The Netherlands Antilles provides a case in point. Early editions of Big Blue have a section titled “Curaçao”, short for Curaçao and Dependencies, a group of islands widely spread across the Caribbean Sea comprising Curaçao, Aruba, Bonaire, Sint Eustatius, Sint Maarten, and Saba. All six islands are featured in the 1942 pictorial series (see above). For all stamps in Part I of Big Blue, the name Curaçao applies to the six islands collectively and to the island Curaçao individually.

The same stamps were moved in the 1969 edition of Big Blue (the BB album that both Jim and I use) to a new heading titled “Netherlands Antilles” -- a change consistent with the 1948/1954 decisions about the islands’ connection with the Kingdom of the Netherlands. Those decisions, however, came well after the closing date for Big Blue Part I (1940). So, I think the stamps shown on the page scans below would fit more appropriately under the heading Curaçao than under Netherlands Antilles.

After filling BB’s spaces for “Netherlands Antilles” I thought I would replace the existing stamps with cancellations from all six islands on the stamps inscribed Curaçao -- a kind of weak-kneed protest intended to show how things actually were when the stamps were issued. That goal is proving to be difficult because, while interesting cancellations do exist for all six islands, they’re scarce and usually expensive. I’ve found several Aruba cancels on airmail stamps -- probably the most plentiful except for Curaçao island itself.

Scott #s c8, j17, c6, Aruba cancels
A Saba cover recently sold on eBay for a reasonable price, but I missed it. Cancels struck in Saba, a hurricane-swept dot at the outer rim of the Caribbean, are elusive; those struck in Bonaire, even more so. 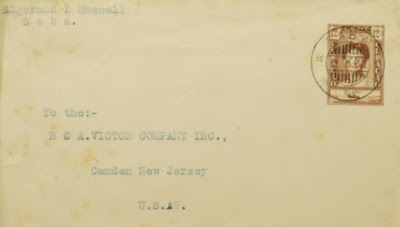 Scott # 98, Saba cancel on cover. Source: eBay.
Island cancels on the marine insurance stamps are yet more difficult to find. The marine insurance stamps are overprinted “Frankeer Zegel” (postage stamp) and intended for regular use, not for insurance. The three-cent example shown below has an indistinct island cancel, possibly Sint Eustatius, and is dated 1929, a year before these stamps became invalid for postage.

The Netherlands created marine insurance stamps in 1921 in response to the maritime disasters of World War I. Letters with such a stamp affixed were placed in a “floating safe” located on the ship decks. In the event a ship sank, the bobbing safe would be reclaimed by rescue ships or, eventually, float ashore. I know of no instance of this safekeeping precaution being put into action. Marine insurance stamps were issued for several Dutch colonies as well as the homeland, but they found little usage.

Jim's Observations
Big Blue '69, on two pages, has 73 spaces for the stamps of Curacao. No coverage of the Postal Due stamps is included. Total coverage is 39%.• Coverage is "reasonable" for a two page allotment, but I did find an additional 37 stamps (15 postage due) that were CV <$1-$1+,and not in Big Blue.• Expensive stamps ($10+) are only in two spaces.
Netherlands Antilles (Curaçao) Blog Post & BB Checklist
Page 1 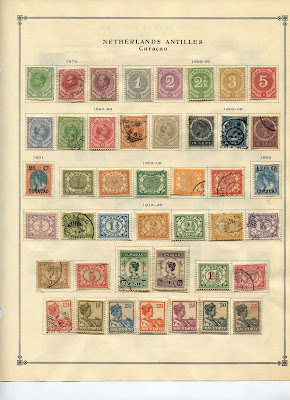 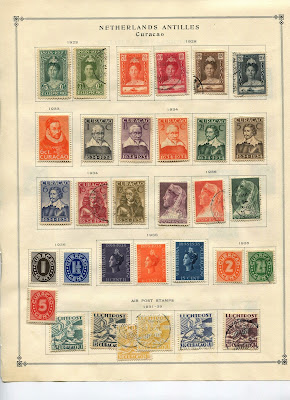 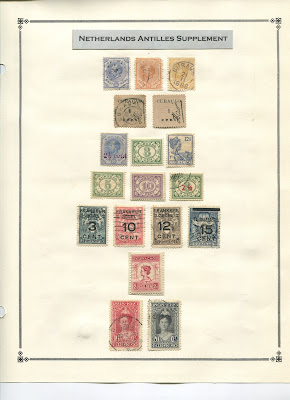 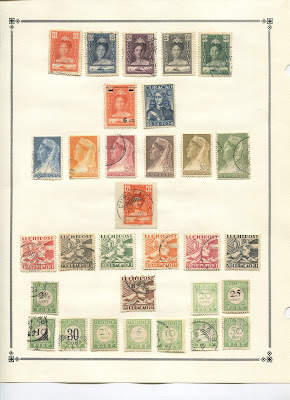