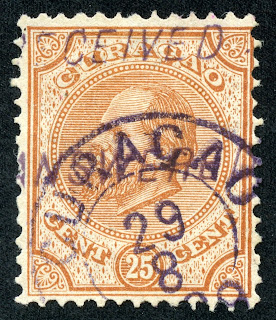 1873 Scott 5 25c brown orange "King William III"
Quick History
Curacao is an island off the Venezuelan coast, and has been in the hands of the Dutch (with brief ownership by the British and French) since 1634. The Dutch West India Company founded the capital of Willemstad on a natural harbor, and commerce, shipping, salt mining, piracy, and slave trade ensued. Slave trade was abolished in 1863.

After the Napoleonic wars in 1815, the island became the colony of Curacao and Dependencies (Curacao, Aruba, Bonaire, Sint Eustatius, Sint Maarten, Saba) , which lasted until 1936. 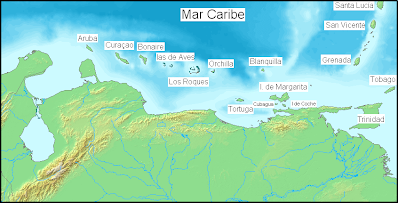 Curacao in the Lesser Antilles
Oil was discovered in 1914, and, with the Royal Dutch Shell company installing an oil refinery, the economy of the island changed significantly. 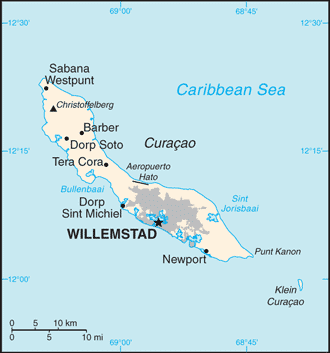 Note: The  "Netherlands Antilles" name is favored in the current Scott catalogues, and also is used  in the '69 edition and later Big Blues. But the earlier Big Blues had the colony as "Curacao".  And, during the classical era, the colony was organized as "Curacao and Dependencies". So, the blog post will use "Curacao" as the preferred name. 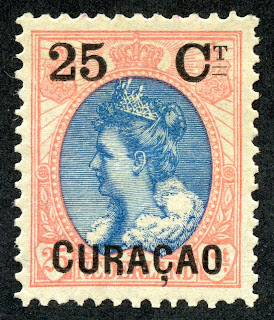 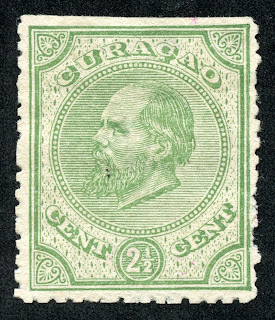 1873 Scott 1b 2 1/2c green "William III"
Perf 14, small holes
The first seven stamp issue for Curacao was released between 1873-79 with the above design. The frame is different than the similar Netherlands issue- and I actually think it looks better. ;-) CV is $5-$50+.  The minor number "small holes" perf variety is shown here. 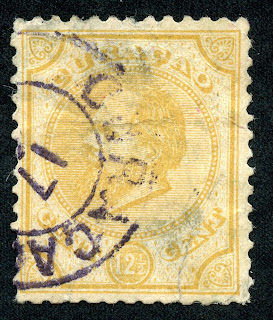 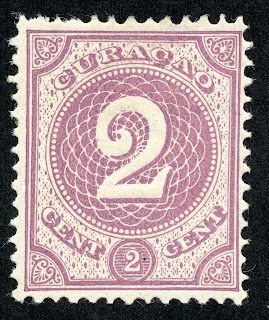 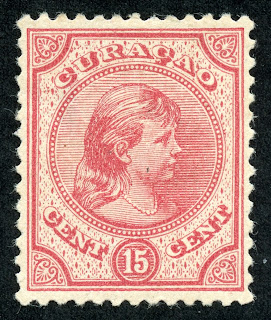 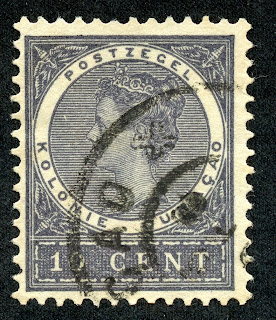 1904 Scott 36 10c slate "Wilhelmina"
Between 1904-08, a thirteen stamp issue with "Numerals" (shown elsewhere on the blog post), and this portrait of the young queen was produced. The Queen had married Duke Henry of Mecklenburg-Schwerin in 1901. She had two miscarriages and a stillborn, until Juliana was born in 1909, much to great relief. 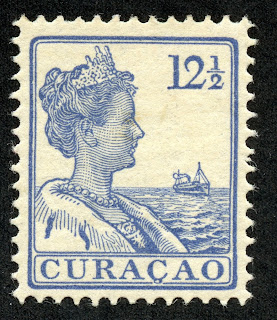 1915 Scott 60 12 1/2c blue "Wilhelmina"
A large 28 stamp issue was produced between 1915-33, with "Numerals" (Shown elsewhere), and with the adult queen placed in front of the sea and a sailing vessel. Regal, Yes? A similar portrait was used for Suriname. 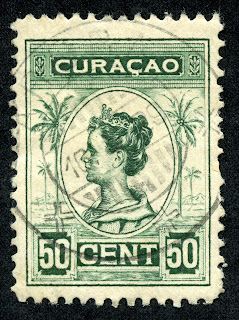 The higher values of the preceding issue were engraved, and had the portrait, as shown. CV for the entire issue ranges from <$1-$20. 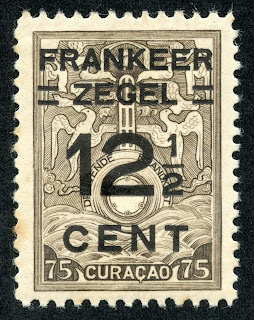 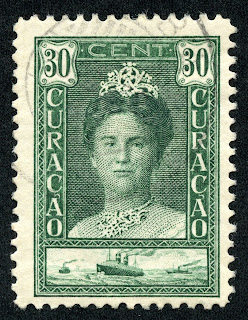 1928 Scott 104 30c deep green
"Queen Wilhelmina"
The mature queen had an eleven stamp set released between 1928-30.  A large passenger liner is shown in the lower panel, implying travel ( or commerce).  I couldn't find out if Wilhelmina ever visited Curacao- does a reader know? 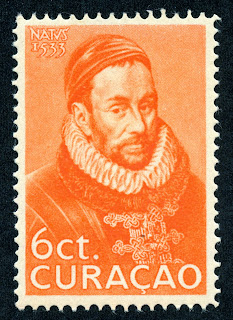 1933 Scott 109 6c deep orange
"William the Silent"
In 1933, a single stamp was released for the 400th anniversary of the birth of Prince William I, Count of Nassau, and Prince of Orange. Apparently, he was also quite taciturn. 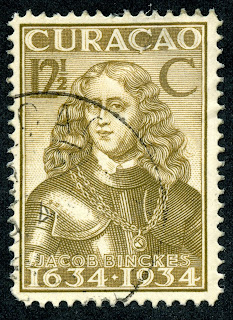 1934 Scott 117 12 1/2c bister brown
"Jacob Binckes"
For the 3rd Centenary of the founding of the colony, a large 17 stamp issue with six subjects was issued. Jacob Binkes renamed New Amsterdam "New York" in 1664, he was part of two Dutch invasions of England in 1667, and defeated the French fleet in the First Battle of Tobago in 1677. 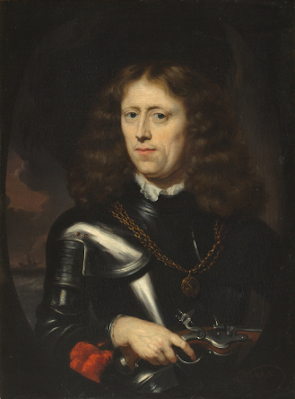 Jacob Binkes by Nicolaes Maes
It is clear that the stamp image was modeled after this painting. 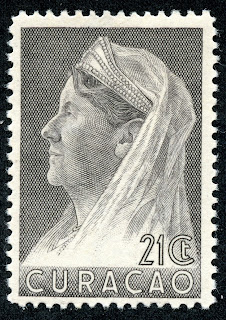 1936 Scott 137 21c dark gray
"Queen Wilhelmina"
Forty-six years into her reign, the Queen was featured (along with numerals for the lower denominations) on this seventeen stamp issue produced in 1936. More wise than beautiful at this stage.... 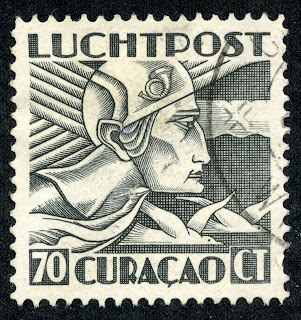 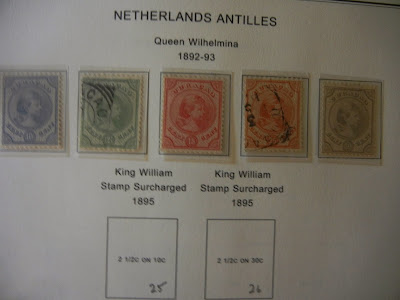 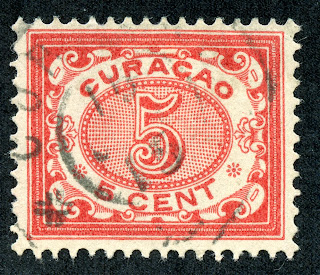 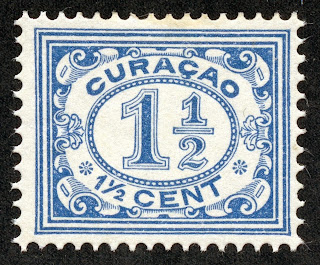 1920 Scott 47 1 1/2c blue "Numeral"
Out of the Blue
I find Netherlands designed stamps nice indeed, and having a Dutch Caribbean colony, such as Curacao, to collect is a pleasant bonus.

Note: Maps, pic of Willemstad, pic of Jacob Binkes,  appear to be in the public domain.

Willemstad
Posted by Jim at 1:28 PM